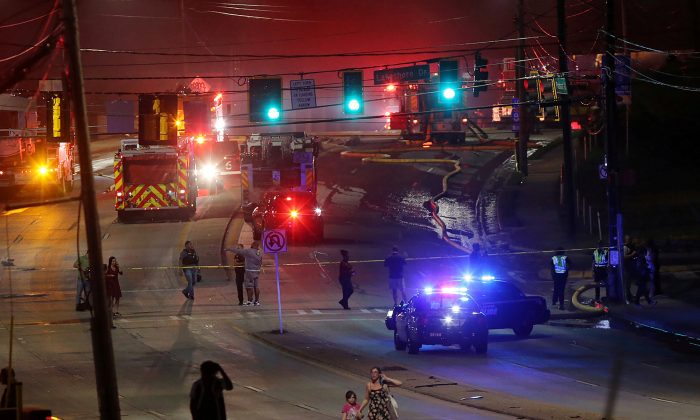 People make their way away from the bridge fire on Piedmont Road as emergency personnel work the scene of a bridge collapse at I-85 in Atlanta, Georgia. (Courtesy Curtis Compton/Atlanta Journal-Constitution/Handout via REUTERS)
US

ATLANTA—Three people described as transients were in custody Friday in connection with the fiery collapse of a major interstate highway bridge running through the heart of Atlanta, as officials said it would take months to repair the damage.

No one was hurt when the span gave way on Thursday evening as a fire raged beneath it, sending thick black smoke into the air and briefly igniting a fireball before the structure fell in on itself, snarling traffic.

Inspectors have determined that at least 700 feet of Interstate 85 must be replaced, including three sections of the northbound bridge and three on the southbound side, as well as their support columns, officials said.

“The repairs will take at least several months,” State Transportation Commissioner Russell McMurry told a news conference. “We are asking for the public’s continued patience.”

Three people were taken into custody in connection with the fire, said Glenn Allen, a spokesman for the Georgia Insurance and Safety Fire Commission. One suspect, Basil Eleby, was charged with criminal damage to property; the others, Sophia Bruner and Barry Thomas, were each charged with criminal trespass, he said.

All appeared to be transients, Allen said.

Some 250,000 motorists use the highway each day to travel in and out of downtown Atlanta, state officials said.

As the fire raged on Thursday, the smoke was so thick that residents living nearby in the heart of Atlanta said they thought a storm was coming or that the sun had set early.

The flames burned so fiercely that concrete cracked and steel melted, even as dozens of firefighters battled the blaze, officials said.

The cause of the inferno remained unknown. McMurry said construction materials belonging to the state, including PVC pipes, were stored under the highway but would not have caught fire on their own.

“We are certainly as eager as anyone to find out (what caused it),” McMurry said.

Hours after the collapse, drivers were still struggling to get off the highway. Government offices in Atlanta opened an hour late to give people extra time to get to work.