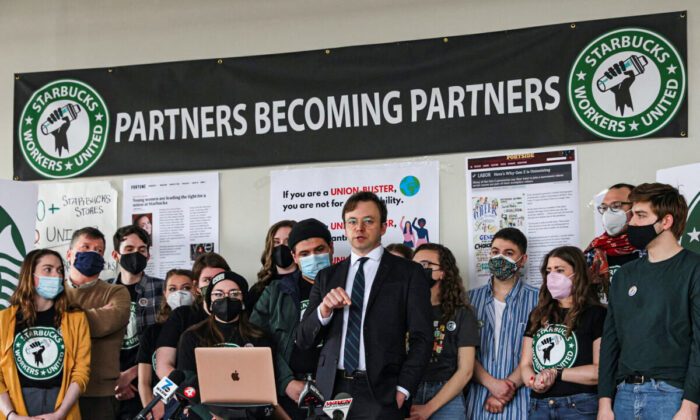 Attorney Ian Hayes and Starbucks workers speak during a news conference to react to a decision by the National Labor Relations Board to postpone a scheduled union vote count in Buffalo, New York, on Feb. 23, 2022. (Brendan McDermid/Reuters)
Companies

Employees at three Starbucks stores in the Buffalo metropolitan area of New York have voted to unionize after a ballot count on March 9, bringing the total number of unionized stores to six.

Labor activists in at least two dozen states have been leading the charge to unionize.

The workers will join Starbucks Workers United following a months-long campaign, marked by legal wrangling and workers’ accusations of intimidation by management within the nation’s largest coffee chain.

The votes were close, with store employees in Cheektowaga, Amherst, and Depew winning by a narrow margin in favor of unionizing, according to the National Labor Relations Board.

Although the Starbucks employees at those locations had cast their votes weeks ago, their ballots were temporarily impounded on Feb. 23, after Starbucks filed a request for review with the NLRB.

The union has won two other elections in New York and one in Mesa, Arizona, with one lost election so far, becoming one of the most closely watched unionization efforts in years.

Unionization has become an increasingly partisan issue, according to data from the Pew Research Center.

The proportion of Americans who say labor unions have a positive effect remained static at 55 percent from 2019 to 2021.

Union membership has fallen dramatically across the U.S. in recent decades, from 20.1 percent of workers in 1980 to 10.3 percent in 2021, according to the Bureau of Labor Statistics.

Only 1.2 percent of workers at food service and drinking establishments were unionized in 2021, reported the BLS.

After about two decades of staving off labor organizing drives, Starbucks lost a series of pro-union votes in two Buffalo-area locations in December, followed by a Mesa, Arizona store on Feb. 5.

Since last year, Starbucks managers have been holding meetings with workers to discourage them from unionizing, while the company’s lawyers have attempted to stall the efforts through litigation at the NLRB.

The labor activist strategy has been to seek elections at individual stores, while Starbucks has argued that the NLRB should group the stores into larger elections on a regional basis, which benefits the company, as wider elections tend to dilute the union’s support at individual sites.

Starbucks has failed with that legal argument in each case, with a recent labor board ruling rejecting an appeal from Starbucks that could make it harder for the company to delay votes moving forward.

Labor organizers have accused Starbucks of using underhanded tactics to sabotage the campaign, but the company has said that it has bargained in good faith with the union.

Union supporters believe that the narrowly close decision to unionize was due to the use of threats, firings, and emotional manipulation by management to intimidate workers as they weighed their votes, including the placement of out-of-town managers.

Starbucks has fired a number of open union supporters, including seven workers in Memphis, Tennessee, but the company said the workers were fired for legitimate reasons.

The union has filed charges against the company at the NLRB, alleging illegal retaliation by Starbucks and demanding that the fired workers be reinstated.

The coffee chain has been honest about its opposition to unions in its stores and it has steadfastly denied accusations of anti-union activity.

Starbucks has denied using intimidation tactics, but it is fiercely opposed to the unionization efforts, saying that its more than 8,000 company-owned U.S. stores function best with direct relations with employees.