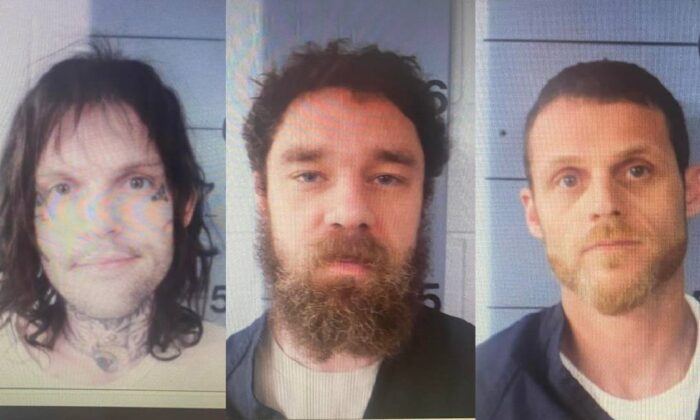 Three inmates at a Missouri county jail were on the run on Tuesday after cutting holes in the plaster ceiling of their cells last week and crawling to a maintenance door that led outside, officials said.

The men—Lance Stephens, 29, Matthew Crawford, 29, and Christopher Blevins, 37—escaped from the Barry County jail in Cassville, about 275 miles southwest of St. Louis, early on Friday morning. Officials offered no information on how long the inmates had been gone before guards noticed they were missing.

The men, who were all acquaintances, are considered armed and dangerous, Barry County Sheriff Danny Boyd told local media.

Neither Boyd nor a sheriff’s representative was available to provide further information on the case. The sheriff told local media there was no indication that the men had any help from jail staff or other inmates.

Blevins and Stephens were in jail on drug and weapons charges, and Crawford was jailed for theft charges, according to an online roster of inmates.

The case has been handed over to the U.S. Marshals Service. A representative of the agency was not immediately available for comment.

The escape comes about two months after an inmate in an Alabama jail escaped with the help of a female corrections officer.

In that case, murder suspect Casey White, 38, was helped by Vicky White, 56, a corrections officer who went on the run with him for several weeks. They were not related.

The corrections officer was believed to be transporting Casey White to the courthouse for a mental evaluation, when they fled together.

Casey White was captured after the vehicle he and Vicky White were in crashed following a pursuit by federal law enforcement officers in Indiana. Vicky White died from an apparent self-inflicted gunshot wound during a showdown with law enforcement.