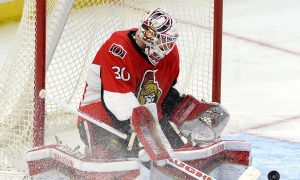 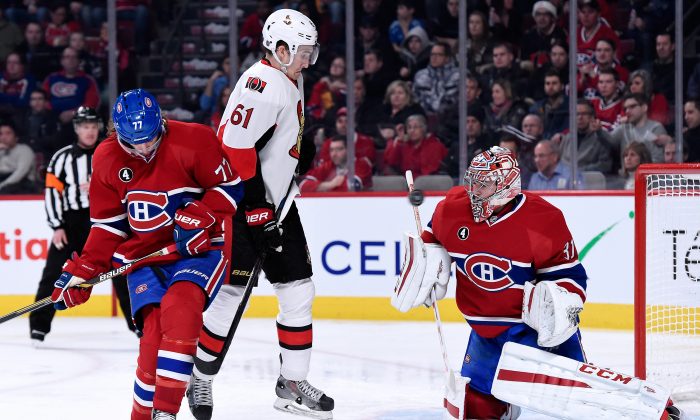 Carey Price stops the puck in front of Tom Gilbert and Mark Stone at the Bell Centre on Dec. 20, 2014 in Montreal, Canada. Montreal and Ottawa renew their rivalry in the NHL Playoffs starting Wednesday, April 15. (Richard Wolowicz/Getty Images)
Canadian Content

The Montreal Canadiens’ reward for the second best record in the NHL is a rivalry renewal against the Ottawa Senators, the league’s hottest team in the last two months of the regular season.

The Sens dominated the season series against the Habs, winning three of four games, but only one of those games—a 5–2 Ottawa win on March 12—featured the “revamped” Senators facing Canadiens goalie Carey Price.

The latter is the matchup that will feature in the first round series. Here are three keys to understanding the series:

Goalscoring is Montreal’s biggest weakness and they need their top sniper to be at his best. The Habs are tied with Pittsburgh for the fewest goals scored of any team that made the playoffs.

Pacioretty didn’t play in the Habs’ last two regular season games after falling heavily into the boards in a game against Florida on April 5.

But it’s not just goalscoring where Pacioretty excels; he’s a great two-way forward and tied for the league lead in +/- at +38. In five-on-five play, which is typically more prevalent in playoff hockey as fewer penalties seem to be called, not having Pacioretty fully fit could be an even bigger loss for Montreal.

To think of Montreal as the No. 2 seed against Ottawa as the No. 7 seed is misleading when one considers that with Ottawa, it’s been a tale of two “half-seasons.”

Who the Sens were prior to Andrew Hammond is irrelevant. Hammond is one of the NHL’s top stories of 2015 with his 20–1–2 record in 23 starts.

The “Hamburglar” has put up incredible statistics: .941 save percentage and 1.79 goals against average. Those numbers, albeit over 24 games, are better than Price’s. The Habs goalie will win the Vezina Trophy for league’s best goalie and is favoured to win the league MVP award.

So can Hammond keep up that level of goaltending in the playoffs? If he can, it’s hard to see the Sens eliminated.

The great goalies like Price don’t have sequences of bad games come playoff time and Hammond has more to prove in this respect.

Ottawa has gone on their run largely due to Hammond’s stellar play, but also due to the play of the Mark Stone–Kyle Turris–Clarke MacArthur line.

Montreal will have to figure out a way to stop this line. Having the last change from home-ice advantage in four of seven games can help with the matchups, but it is not that simple.

But Ottawa’s highest-paid player has been ice cold. If Bobby Ryan—one goal in last 20 games—gets going, Ottawa will have two potent scoring lines.

The third line with Jean-Gabriel Pageau, a noted Habs-killer, is a perfect third line for the playoffs with their work rate, getting pucks to the net, and playing well defensively.

Despite an anaemic attack and aside from Pacioretty, Montreal has two other lines that are attack-minded. Players like Lars Eller, Alex Galchenyuk, Brendan Gallagher, and Plekanec can get hot and may see increased responsibility.

Montreal and Ottawa feature two of the game’s best scoring defensemen in P.K. Subban and Erik Karlsson. Their numbers are in the same ballpark, but Subban is slightly more productive in five-on-five play, which is critical in playoff hockey.

Montreal’s been a model of consistency throughout the season, always hobnobbing with the league’s top clubs. But the Canadiens’ form has dipped recently. By comparison with the Sens since Feb. 16, Montreal’s record is 13–7–6 (.615). Their “first half” of the season started 37–15–4 (.696).

Even less than a week before the end of the regular season on Saturday, April 11, it was highly unlikely that the Habs and Sens would meet in the first round.

While Montreal was favoured to win the Atlantic Division, Ottawa was very much on the outside looking in—especially after going down 0–3 in the first period to Pittsburgh in its 79th game of the regular season on April 7. But wins at the New York Rangers and Philadelphia Flyers combined with Boston losing its last three games and Pittsburgh losing five of its last six vaulted Ottawa into the first wildcard position—and away from an undesirable matchup against the New York Rangers.

It was a banner end of season for Canadian teams with five of them reaching the playoffs—the most since 2003-04. But two of them will be gone after the first round.

What’s more is that one of those eliminated teams will be the team that finished second in the overall NHL standings with 110 points—Montreal—or the hottest team in the last two months, Ottawa.