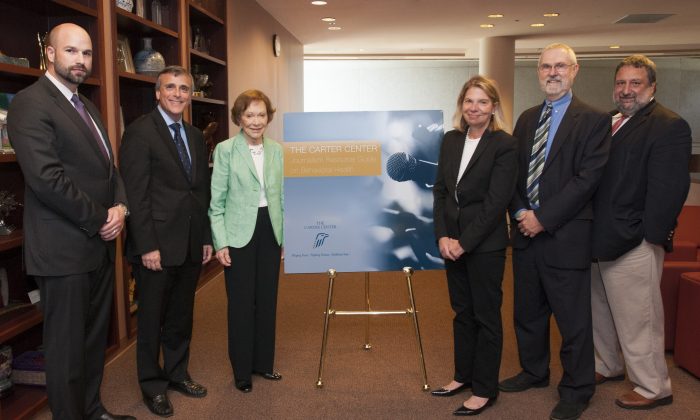 Words matter for people with mental illness, and for the people around them

ATLANTA—School officials pulled an 8-year-old boy who was having mental health issues out of class, so he could see a psychiatrist. On the bus ride home, other students taunted him. “Psycho! Crazy!” Once home, he “cried his eyes out to his parents.” For 20 years he avoided mental health services. Not if it led to that kind of rejection and contempt.

“Of course, I was that 8-year-old boy,” said Paolo del Vecchio, director of the Center for Mental Health Services, Substance Abuse and Mental Health Services Administration (SAMHSA). He and former first lady Rosalynn Carter were introducing a new national journalism guide about the best way to report on mental health, at the Carter Center on Sept. 16.

The guide tells reporters to ask themselves three questions:

How reporters tell the stories of people with mental illness makes a tangible difference in jobs, in funding, in seeking or avoiding treatment, in housing, in relationships, in legislation.

Pretty much every family is affected by mental illness.

Mine was. My policy is to not name private people in columns unless they give me permission. I cannot ask my kin who dealt with bipolar disorder and with schizophrenia, because they have left this life.

But I remember their challenges. One could barely function; but thanks to Social Security disability and a loyal caregiver, he was able to live in an apartment. The other taught at a university, worked as an executive, stayed married, and volunteered. His illness also led him to flights of terrible judgment and one nearly successful suicide attempt.

Would it have been more accurate to say that Robin Williams died of complications of bipolar disorder than to say he committed suicide, asked Anita Sharpe, Atlanta bureau chief for Bloomberg News. She moderated a panel at the media guide launch.

“Obituaries are up to the family, but to say ‘died by suicide’ or ‘died as a complication of bipolar’ could reduce stigma,” said Paul Gionfriddo. He is president and CEO of Mental Health America.

Mrs. Carter has devoted more than 45 years of her life to reducing stigma. It started on their first, unplanned campaign, she said.

The activists descended on me, all five of them.
— Rosalynn Carter, former first lady

A gubernatorial candidate died suddenly from a heart attack, and Jimmy Carter stepped in at the last minute. “But I’m about to tell the story too long!” said Carter.

She knew the cotton mill in Swainsboro, Georgia, would be a good place to hand out pamphlets, and morning shift change would be a good time to do it. A tiny woman in dark clothes covered with cotton lint came up to her. She looked exhausted. She had just come out of the mill after working all night. “I said, ‘I wish you can get some sleep.'”

She said, “I don’t think so, because I have a mentally ill daughter.” Her husband worked days and she worked nights, so they could take turns caring for their daughter. No mental health services, no caregiving support, and no treatment could be found.

Later, Carter went to a reception, “and you know how you just grab the next person at a reception.” Her husband grabbed her and asked what she wanted him to do if he was elected governor. She told him to improve mental health services.

He told her, “We’re going to have the best mental health program in the country and I’m going to put you in charge of it.” It was printed in the papers the next day.

I’m sure she pictured shuffling, drooling.

“The activists descended on me, all five of them. That’s literally true,” said Carter. “People did not want to be involved because of the stigma.”

President Carter did not win that election, and I cannot say Georgia is the best in the country. But these new media guidelines are the best.

They include these four essential facts about mental health:

Del Vecchio embodies an encouraging recovery story. When he started his federal job, a colleague told a woman to take care of a mentally ill person coming to work (him). “I’m sure she pictured shuffling, drooling.” He smiled a big smile and said three years later they were married. Now they have beautiful children, two big dogs, and a house in the suburbs. And he directs a federal agency. I call that fulfilling some potential.