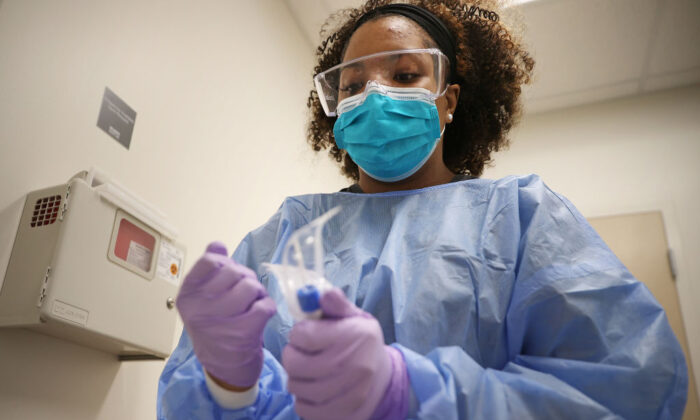 A medical assistant prepares to test a patient for the novel coronavirus in Woodbridge, Va., on April 15, 2020. (Chip Somodevilla/Getty Images)
Executive Branch

OSHA, a regulatory agency within the United States Department of Labor, listed Arizona, Utah, and South Carolina as three states that have not accepted federal emergency temporary standards as a safeguard for COVID-19 or provided a sufficient alternative.

Of the 28 states or territories with OSHA-approved state plans, only three states have been notified of failure.

“OSHA has worked in good faith to help these three state plans come into compliance,” OSHA acting assistant secretary Jim Frederick told reporters. “But their continued refusal is a failure to maintain their state plan commitment to thousands of workers in their state.”

Emily H. Farr, South Carolina Department of Labor, Licensing and Regulation director, expressed disappointment in the news, according to the New York Times.

Farr said that the state’s regulations had “proven effective as South Carolina has consistently had one of the lowest injury and illness rates in the nation.”

In an Oct. 19 statement, Arizona governor Doug Ducey said that the move was “nothing short of a political stunt and a desperate power grab.”

Furthermore, Ducey said that the state had notified OSHA as early as July 16 that “certain Arizona laws already complied with the ETS [Healthcare Emergency Temporary Standard]” only to receive a notification of failure two months later.

After informing OSHA that Arizona would promptly begin a “rulemaking process” to “review the mandate,” Ducey said OSHA “is disregarding Arizona’s commitment to allowing a public input process.”

In a recent statement, Gov. Spencer J. Cox of Utah expressed disappointment in OSHA and its assertion that Utah’s State Plan is less effective than the federal program.

“The Healthcare ETS would place an unfair burden on the healthcare industry,” added Cox. “Our states do not have regulatory authority to require employers to pay their employees sick leave.”

OSHA’s announcement of compliance failures followed Biden’s Oct. 12 submission of the vaccine mandate, which demands private companies with 100 employees or more to show proof of vaccination from each worker or make them get tested for COVID-19 once a week.

Just last week a Department of Labor spokesperson told The Epoch Times in an email that OSHA had been working “expeditiously” to develop the mandate, which it described as an “emergency temporary standard.”

Since then several Republican attorneys general have threatened to take legal action against the COVID-19 vaccine mandate enforced upon the private sector.