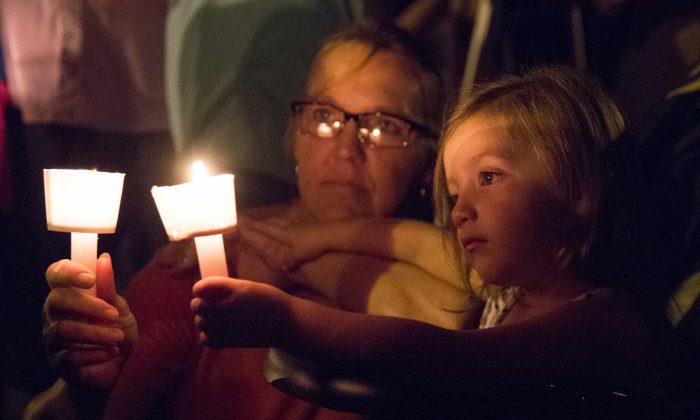 A candlelight vigil is observed on Nov. 5, 2017, following the mass shooting at the First Baptist Church in Sutherland Springs, Texas. (SUZANNE CORDEIRO/AFP/Getty Images)
Crime and Incidents

In one day, John Holcombe lost his pregnant wife, three children, and his parents. They were among the 26 killed by a lone gunman in a small-town Texas church on Sunday, Nov. 5. Eight of his family members died that day.

Crystal Holcombe was in an advanced stage of pregnancy, sharing happy moments on her Facebook page until Saturday night, when she boasted the third and first places her daughters earned at a cooking show. Hours later, the mood of the page turned to alarm, with friends asking about her whereabouts. Then came the condolences.

John Holcombe’s page has since been filled with words of support—many from people who didn’t know him, some from as far as Norway—offering sympathy and prayer.

The names of the victims haven’t been released yet, but authorities have said the ages range from 5 to 72 in age. About half of them were children, including Annabelle Renee, 14-year-old daughter to the church’s pastor, Frank Pomeroy. The pastor and his wife were out of town that day.

“Heaven truly gained a real beautiful angel this morning along with many more,” Scott Pomeroy, the girl’s uncle, shared on Facebook. “I know all that have taken their last breath of dirty air and took their first breath of heavenly air with new bodies with no pain and suffering.”

The visiting pastor was among the killed, as well as Crystal Holcombe’s brother-in-law and his young child.

About 20 more were wounded. None of the people in the First Baptist Church in Sutherland Springs escaped unscathed, said Wilson County Sheriff Joe Tackitt, according to CNN.

The shooter, allegedly Devin Patrick Kelley, 26, had massacred some 4 percent of the tiny town’s population.

The Holcombes were a wholesome family, according to Crystal’s cousin, Nick Uhlig.

“She doesn’t even drink, smoke or nothing,” Uhlig told the Houston Chronicle, the Associated Press reported. “She just takes care of kids; she raises goats and makes homemade cheese. That kind of thing, you know? They don’t go out dancing or anything like that. They’re real old-fashioned, down-to-earth.”

John Holcombe’s father, Bryan Holcombe, had done prison ministry, Uhlig said. “He would go up to the prison with a ukulele to sing.”

The shooting happened around 11:20 a.m. Upon leaving the church, the shooter was confronted and shot at by a local resident, who then chased him down the road for about 11 miles until the shooter crashed his car. He was found dead inside the vehicle with what is believed to be a self-inflicted gunshot wound, according to law enforcement.

Local residents held a candlelight vigil for the victims on Sunday night.