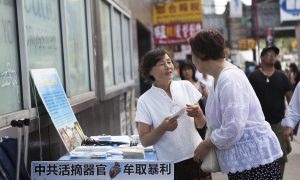 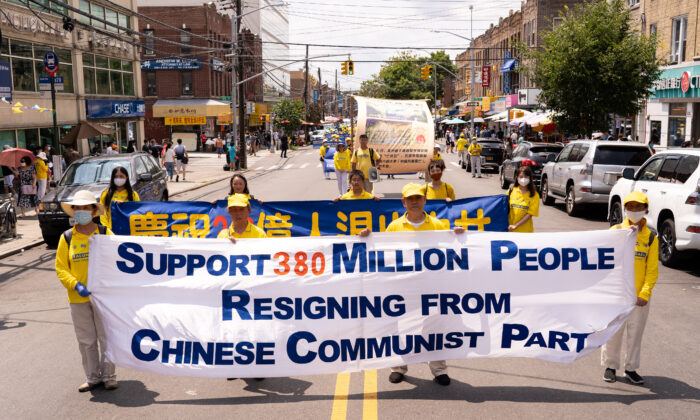 Three Chinese who live in the United States quit the Chinese Communist Party (CCP) and its affiliated organizations, joining over 383 million Chinese who have registered a public statement of withdrawal from the CCP.

From cradle to grave, Chinese citizens are told to be loyal to the CCP. They are also forced or asked to join CCP-affiliated organizations. As young children, they are enrolled in the Young Pioneers. In middle school, they can join the Communist Youth League. As an adult, they may choose to join the CCP.

Gebi Dong, a U.S.-based economist and an independent columnist, said of the CCP, “Its evil is all-encompassing, all its manifestations are demonic, and the extent of its evil can be said to be ‘unprecedented, unparalleled in the world.’”

“The CCP’s persecution of the Falun Gong practice group is the greatest humanitarian disaster in the world: live harvesting of human organs is an unprecedented evil in human history … and 1.4 billion people are controlled by the CCP, which is also unprecedented in the history of mankind,” he said.

Falun Gong, also known as Falun Dafa, is a spiritual practice that teaches people to follow the principles of truthfulness, compassion, and tolerance, and it has been persecuted by the CCP since 1999.

Since 2004, when The Epoch Times published the editorial series “Nine Commentaries on the Communist Party,” hundreds of millions of Chinese people have quit the CCP by making a public declaration that the oaths they gave to the CCP are null and void. Quitting the CCP is called “Tuidang” in Chinese.

The Global Service Center for Quitting the CCP (Tuidang Center) said on the website that each person who publishes a statement to quit the CCP at the Tuidang Center will receive a certificate.

Dong recalled that when first visited Los Angeles in 2011, he heard about the Tuidang movement from a volunteer at the Tuidang Center near the East West Bank.

After settling in the United States, he gained a deeper understanding of the movement, he said. He not only made his declaration to quit the CCP, but also began to persuade other Chinese people to cut their ties with the CCP.

“It is a worldwide consensus that the CCP is the most evil regime of mankind,” he said. “Once the CCP goes down, it would be a big regret to accompany the regime into the grave with the mark of the CCP.”

In ancient China, society had a deeply spiritual foundation that contained moral values from Buddhism, Taoism, and Confucianism. Chinese people believed that a person should not make bad vows at will, because it would bring disaster to oneself, Dong said. Today, if a person has dedicated his life to communism, then the mark of communism—the scythe and the ax—will remain on that person as a sign of communist membership, he said.

“Chinese have an old saying ‘Heaven’s way is hard to violate,’ once you ‘lose your conscience’ or ‘violate heaven’s principle,’ you will be punished by heaven. So it’s absolutely right that ‘Heaven will eliminate the CCP,’” he said.

Zhang Yuchang, a Chinese citizen, said he was astonished to learn of the human rights abuses by the CCP while he studied abroad as an international student.

After returning to China, one day in May 2020, Zhang went to the CCP’s branch office in his local community, demanding to withdraw from the CCP organization.

He wrote a formal statement of withdrawal and signed it with his fingerprints.

The staff at the party branch were surprised. They at first said that their manager was not in and asked him to come back later to make an inquiry, then said that a meeting was needed to decide how to proceed.

The staff recognized Zhang’s withdrawal from the party after his third visit but did not issue any receipt or proof to Zhang.

Now back in the United States, Zhang told The Epoch Times, “If you don’t want to be … fooled by the CCP,  but you want to have the right to be a real human being and live in a better environment—I urge people to quit the CCP as soon as possible.”

On July 11, a group of Chinese people living in New York held an event in front of the New York Public Library denouncing the crimes of the CCP on the occasion of its centennial.

At the event, Yang Shisong, a Christian, told The Epoch Times the CCP “will always be my enemy.”

While in China, Yang used the software called Freedom Gate that allows people inside China to access websites that are blocked by China’s internet blockade.

He sent an email to quit the Communist Youth League, to which he had automatically been enrolled in school when he reached an age set by the CCP.

After arriving in the United States, Yang publicly posted the certificate of withdrawal issued by The Global Service Center for Quitting the CCP.

Yang said he tries to tell his friends and family about the CCP’s deception of the Chinese people.

“The CCP persecutes Buddhism, Christianity, and Catholicism to almost extinction, and the evilness has never stopped since the CCP established its regime. The persecution of Falun Gong has been particularly cruel,” Yang added.

“The CCP will not stand long. If you look over history, no regime that persecuted religion has lasted long,” he said.

“It is inevitable that the CCP will destroy themselves because they are against the will of heaven, just a matter of time.”

Yang said that Chinese people should keep a distance from the CCP: “Quitting the CCP is a shortcut to avoid being dragged down with the CCP.”

As a Christian, Yang believes that those who have already quit the CCP differ from those who are still with the CCP in spirit: “a group of people with a spirit of fraternity and equality, and we can live in peace and love with people of all nationalities and ethnicities,” he said.