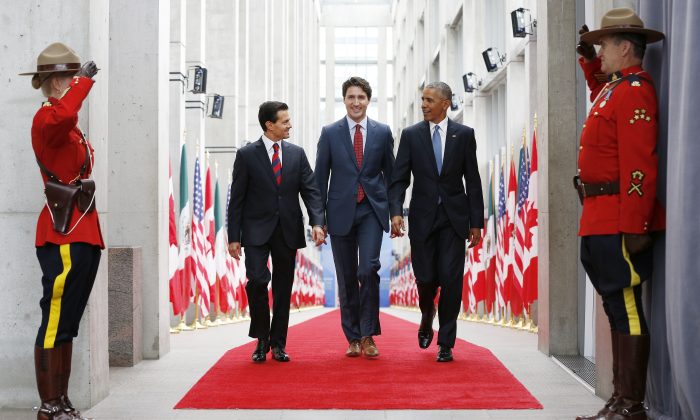 Friendship at all-time high between Canada, US, Mexico at leaders' summit
By Rahul Vaidyanath

OTTAWA—In the face of rising anti-globalization, the leaders of Canada, Mexico, and the United States firmly stated that the best way forward is together.

In the bright and airy Great Hall of the National Gallery of Canada, Prime Minister Justin Trudeau, President Enrique Peña Nieto, and President Barack Obama also expressed their mutual friendship. They were truly the “three amigos.”

Obama, as the senior statesman, always referred to his counterparts by their first names. A camaraderie that went beyond being cordial was on display throughout the day. And Obama was notably verbose in his remarks, reflecting the limited time he has left in office.

Fresh on the heels of the historic Brexit vote and renewed campaign trail rhetoric from Donald Trump about tearing up trade agreements, the North American Leaders’ Summit (NALS) painted a hopeful landscape for greater integration.

Canada was hosting the “Three Amigos” summit for the first time since 2007.

A June 27 Angus Reid poll showed just 25 percent of Canadians feel the North American Free Trade Agreement (NAFTA) has benefited Canada. The other 75 percent is roughly split between it hurting, not having any effect, or not being sure of its effect on Canada.

The prescription of withdrawing from trade deals and focusing solely on your local market—that’s the wrong medicine.
— Barack Obama

However, a 2015 election poll indicated that 57 percent of Canadians feel building trade ties with international partners should be the top foreign policy priority.

Perhaps not surprisingly given Trump’s rise in popularity, a March Bloomberg poll showed that 44 percent of Americans say NAFTA has been bad for the U.S. economy, with the rest of Americans roughly split between it being positive or not having an opinion.

The three leaders are strong proponents of the Trans-Pacific Partnership (TPP), which Trump called a “rape of our country” at a Tuesday campaign stop in Pennsylvania. He advocates renegotiating NAFTA or having the U.S. withdraw from it altogether in favor of bilateral trade agreements.

“My firm belief—making sure that how we trade, how we exchange goods—shaping those in accordance with the values our three countries care deeply about is going to be good for us,” he said.

“To pull up the drawbridge is going to be bad for us,” Obama said. He made the point that it’s important not to somehow draw analogies between Brexit and how North America is trying to access Asian markets through the TPP.

Peña Nieto said his country is in the process of approving the TPP and emphasized that isolationism is not the solution. Obama discussed how the TPP raises standards for workers and the environment. And Trudeau pointed out that industries that export pay 50 percent better than those that don’t.

Obama and Peña Nieto criticized protectionism and anti-globalization. However, both recognized that the benefits for freer trade have not been equally shared. The wealth of the top 1 percent has grown and yet wages have stagnated, Obama said.

“That’s a real problem. If that continues, the social cohesion and political consensus needed for liberal market economies start breaking down,” said Obama. And that is precisely what seems to be taking place in the U.S. with Trump being a lightning rod for the affected.

“The benefits have not reached society as a whole. That is true,” Peña Nieto said.

“But using populism and demagoguery—they choose the easiest way to solve the challenges of today’s world. It’s not as easy as that,” he added.

“The prescription of withdrawing from trade deals and focusing solely on your local market—that’s the wrong medicine,” Obama said. He suggested that auto plants would shut down without access to parts from around the world, resulting in job losses and economic disruption.

Obama means for North America to keep working at these trade agreements and to get them right. Otherwise, others will step up to the plate.

“We’ve got to get out there to help shape those rules so that they work for our workers and our businesses. Because if we don’t, China will write the rules and they may not have the same regard for the values that we do,” Obama said.

He added that, “Other countries will write the rules in other ways that will disadvantage our workers and our businesses.”

The TPP is viewed by the Canadian government as a key tool in creating jobs and enhancing North American industrial and agricultural production.

The benefits have not reached society as a whole. That is true.
— Enrique Peña Nieto

“We will continue to work diligently to complete our respective domestic review processes,” according to a statement from the Prime Minister’s Office.

One of the aims of the NALS is to facilitate more trade between the three countries and enable them to produce goods and services together more efficiently.

A fourth package of amendments to NAFTA will work to reduce costs in North American trade. It will also serve to update sourcing patterns and production practices so that products meet the rules of origin and get preferential export treatment under NAFTA.

The North American region represents more than 25 percent of the world’s gross domestic product (GDP) with a combined population of 530 million.

“I’m fully convinced that working together, we can be the most competitive region in the world,” Peña Nieto said.

In 2015, trilateral merchandise trade amounted to US$1 trillion and the combined GDP has more than doubled in the past two decades, rising from US$8 trillion in 1993 to $US20.6 trillion today.

“In short, we’re going to do more to speak with one united North American voice on the world stage. We couldn’t have better partners than Justin and Enrique,” Obama said.