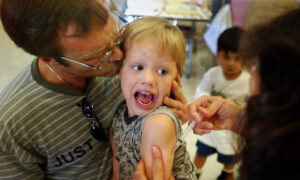 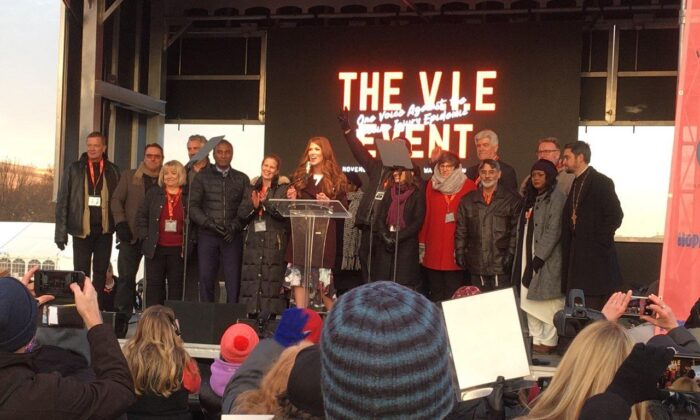 Hillary Simpson, the founder of Crazymothers, speaks at the Vaccine Injury Epidemic Event on Capitol Hill in Washington on Nov. 15, 2019. (Candice Edwards)
US News

Nearly 3,000 people attended a rally on the National Mall in Washington on Friday to bring attention to what they say is an epidemic of vaccine injury in America, an epidemic that is not getting either the medical or media attention it needs.

The event, called the Vaccine Injury Epidemic Event, was organized by the non-profit group Crazymothers. Founder Hillary Simpson told Epoch Times that she organized the event to bring doctors lawyers, scientists, legislators, and mothers together to address the vaccine issue from every angle.

“I think when you have 53 percent of American children suffer from a chronic issue you have to start to look at it,” she told The Epoch Times.

Simpson’s son had a severe reaction after receiving several vaccinations on the same day. After she made a video describing what happened, she estimates that she heard from thousands of parents who reported similar symptoms to her son’s. Common symptoms described in the reports were very high fevers, immediate signs of gastrointestinal issues, encephalitis (swelling of the brain), and seizures.

The other common theme she said is that when parents take a child with these symptoms back to their doctor, physicians say this isn’t a vaccine reaction.

Event speakers included Robert F. Kennedy Jr., Del Bigtree a journalist and producer of the documentary “Vaxxed: From Cover-up to Catastrophe,” which looks at evidence of fraud in one of the key MMR safety studies done by the CDC, and Dr. Andrew Wakefield, the director of “Vaxxed.” The film’s makers say the film has been heavily censored.

The event also included a screening of “Vaxxed II: The People’s Choice,” a compilation of interviews with parents collected by the “Vaxxed” film team while on a screening tour for the first film.

On the 18-month tour, over 7200 people wrote on the tour bus the names of their loved ones who they believe were injured or killed by vaccines. At Friday’s rally, over 1200 new names were added, “Vaxxed” team members told Epoch Times.

The event comes amidst increasing calls for vaccine mandates and a culture of disbelief of parents who have concerns.

This year New York became the fifth state to not allow any religious or philosophical objections to receiving vaccines.

And Jimmy Kimmel, who has used his show on multiple occasions to discredit concerns about vaccine safety, implied in a segment with Dr. Oz that none of these parents were rational.

“What is going on nowadays? I know people who appear to be reasonable people who are questioning whether or not they should vaccinate their kids,” Kimmel said.

However concerns are pretty widespread. In an article in September, the New York Times cited a 2011 study that found a quarter of American parents had serious concerns about vaccines and that 30 percent worried that they might cause learning disabilities, including autism.

Simpson said there were several documentary teams in attendance and some people who came from Australia and Europe. However, despite notifying media of the event, there was no mainstream coverage.

“We were not able to have any type of mainstream media coverage. I think it’s a question that is concerning and should be looked at: Why were thousands of parents who’ve experienced this showing up on our Capitol to raise awareness? Why was there a complete blackout?”

She and her team are all mothers whose children experienced vaccine injury, and all work unpaid, she said.

“There is one goal, and that is to get the message out about the marginalization of women around this issue because I think it’s a really important thing to talk about,” she added.

The event coincided with the anniversary of the passage of the National Childhood Vaccine Injury Act (NCVIA) 33 years ago. The NCVIA removed manufacturer liability for vaccine injury and death and created a government compensation program for those affected.

Since its inception the number of pediatric vaccines has tripled, and the court has paid out over $4 billion dollars in compensation for vaccine injuries.

In a keynote speech earlier this month at the Harlem Vaccine Forum, Kennedy said:

VAERS is a passive surveillance system to detect safety issues, anyone can file a VAERS report and physicians are supposed to report any adverse event following a vaccine to it.

The  Vaccine Safety Datalink  is  a collaboration between the CDC and private health care organizations. Electronic health data for millions of people is analyzed for adverse health events following vaccination. Critics have pointed out that this system is not open for independent analysis.

Simpson said that she has personally spoken to doctors who don’t know about VAERS and so part of what needs to happen is better education for doctors about vaccine injury.

“More awareness around the fact that vaccine injury is real and they should be more educated in how to diagnosed and properly assess vaccine injury, and also how to report to VAERS,” she said.