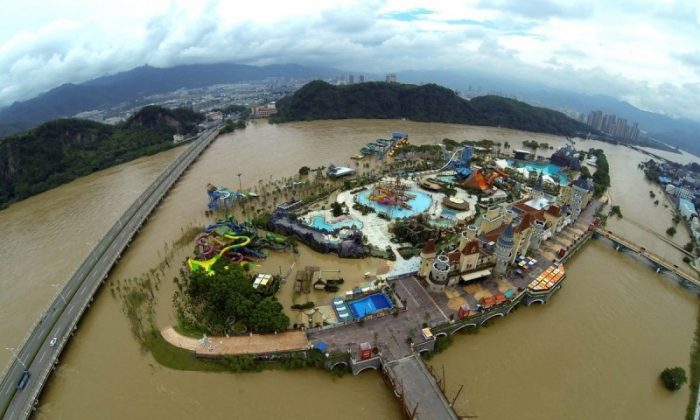 On Aug. 20, heavy rain at Lishui City, Zhejiang Province and the released of water from a nearby reservoir resulted in the city being submerged in water. (Internet picture)
China

Thousands in Lishui City of eastern China protested a “man-made disaster” on Aug. 21, demanding compensation. So far, the authorities  suppressed the protests and have not responded to the demands.

Heavy rains from Aug. 18-20 caused the water level of the Ou River in Lishui City in the coastal province of Zhejiang to rise drastically. On Aug. 20, water was unexpectedly released from the Jinshuitan Reservoir, resulting in heavy flooding.

Lishui City and nearby counties were flooded with water as deep as 4 meters (approximately 13 feet).

On the morning of Aug. 21, thousands of residents showed up in front of the local government building demanding compensation.

In the afternoon, residents were holding up banners that read: “The Government Cared Nothing about the People and Their Properties—Releasing Water before Announcement—Should be Responsible”; “It Wasn’t a Torrential Flood. It Wasn’t a Tsunami. Lishui City Is Submerged in Water Because of Negligence for Human Life and Property. It Was a Man-made Disaster.”

In the evening, thousands of residents blocked roads leading to Shuidong Bridge. They were met with special and  military police forces.

“My friends went to the protest. They told me that there were 20 thousand people at most,” said Mr. Wang, a resident in Liandu District, Lishui City. “Later, police moved in and started suppressing the protestors. Many people were injured.”

Mr. Wang was among those who suffered the worst property damage.

“The 20 cars in my store have all been damaged by water. The loss is at least 1 million yuan [about US$162.6 thousand],” Mr. Wang, owner of a used-car dealership near Shuidong Bridge, told Epoch Times. According to Mr. Wang, the water was released at midnight on Aug. 19, and the water level reached 1 meter by 4 in the morning on Aug. 20.

“There wasn’t any announcement because cellphones are the living proof,” said Mr. Wang. It was not until 10 in the morning on Aug. 20 that Mr. Wang received a warning text message on his cellphone.  His wife did not receive the text message until 7 in the evening the same day, Mr. Wang said.

“The government has done a horrible job,” he said.

The local media in Zhejiang Province, however, tells a different story. According to  state-run media, Deputy Governor Ren Shunu spoke on television at noon on Aug. 20, announcing that the water from the reservoir would be released at 6 and 10 that day.

Officials claimed that, before the release of the water, the government had broadcasted the information on television and the Internet. Officials also claimed that during the water release, over 370 thousand warning messages were sent.

“This is a wretched government. There must have been a plan all along to release the water. Why couldn’t there be an announcement?” said Ms. Kuan, who also lives near the  Shuidong Bridge.”Now, we have lost everything. I don’t even know how to go on living.”

For Ms. Kuan, all three cars in her garage were destroyed. The basement, and the first, second and third floors of her business building were all submerged in water. The first floor of her residence building  is also underwater.

She said that her decade-worth of achievements were destroyed.  Ms. Kuan said she never received a  text message.

Ms. Kuan told Epoch Times that by 3 in the morning on Aug. 20, the water was 1 meter deep in  places near her residence. She tried to save her belongings, but could only managed to run to higher ground.

About ten of the people in her building were  stuck on a balcony. She said that she tried to get the official rescue team to help  them, but her request was turned down.  She was told there was ” no danger standing on the balcony.”

It was not until the evening on Aug. 20 when two of her children were rescued by neighbors with a lifeboat. The rest of her  family members were stuck in the building for two days.

Mr. Zheng, who is in the logistics business and lives in Shuidong District, said that because he didn’t get any notice, all of his warehouses are now submerged in water 4-meters deep. The financial loss cannot be estimated at this moment, as he was stuck on the third floor for one day without any food.

Mr. Wang elaborated that Shuidong Bridge District is the lowest part of the area, so the 4-meters deep water can easily submerge the first floors of any residential areas, business buildings, and garages. Water was likely to cover parts of the second floors as well. People were likely to get stuck on the third floor and above for 24 hours, Mr. Wang said.

If there was an announcement, the loss could have been dramatically reduced, Mr. Wang said. From the day the water subsided on Aug. 21 to  Aug. 23, no one from the government had shown up to check on the wellbeing of the residents.