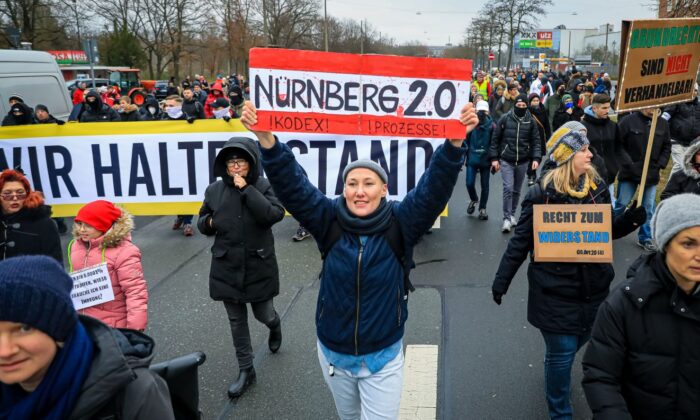 Thousands of people took to the streets of Germany on Monday in protest over COVID-19 restrictions that go into effect on Tuesday.

The demonstrations were particularly rife in Mecklenburg-Western Pomerania, northern Germany, where roughly 15,000 demonstrators took to the streets across several cities to protest against tighter measures, according to local reports.

In Rostock, a city along the Warnow River on the north coast of the country, roughly 6,500 people demonstrated, while in Schwerin there were roughly 2,700 and in Neubrandenburg, around 2,400 people took to the streets to demonstrate.

The city of Cottbus saw around 3,000 demonstrators, according to Tagesschau which cited police figures. Elsewhere in the east, around 9,000 demonstrators took to the streets at 16 locations across the south of Brandenburg. Hundreds more protested in the cities of Hesse, Baden-Württemberg, and various places in Lower Saxony, as per local reports.

In Saxony, East Germany, police said on Twitter that they had officers patrolling areas in Görlitz, Bautzen, Hoyerwerda, Kamenz and Zittau.

“In Bautzen, Görlitz, Zittau, Weißwasser and Hoyerswerda, there are currently larger gatherings of people,” police wrote on Monday. “Our emergency services will inform them of the violation of the current Corona emergency regulations and ask them to leave the area,” officials said.

Police later said they were attacked during the demonstrations in Bautzen.

“The emergency services were massively attacked with fireworks and bottles,” the police said in the evening.

DW reported that at least ten police officers were reportedly injured during demonstrations in Saxony.

Police were also deployed to break up gatherings in the Saxonian cities of Dresden and Leipzig, as per DW.

A number of protestors in the Bavarian town of Schweinfurt received suspended prison sentences on Monday, while another was fined by the local court.

Protests have broken out across Germany in recent weeks as residents face tighter restrictions amid a fifth COVID-19 wave driven by the Omicron variant.

Proof of vaccination is currently required by residents to enter nonessential stores after the government introduced a series of rules targeting those who have not yet had the shots, in an effort to get vaccination rates up.

Last week, Chancellor Olaf Scholz announced the latest measures in place, which include contact restrictions even for vaccinated people.

From Tuesday, Germans who are not vaccinated against COVID-19, also known as SARS-CoV-2, will only be allowed to meet up in groups of two, while those who have been recently vaccinated or recovered from COVID-19 can meet each other in groups of 10.

Nightclubs will also be closed ahead of the New Year and gyms, swimming pools, and cinemas—both indoors and outdoors—will be restricted in size as of Monday.

Many restaurants and cafes are also facing earlier closing times, while large events such as concerts and sports matches will be held without an audience as of Tuesday.

“This is no longer the time for parties and social evenings in big groups,” Scholz said.

Scholz and Germany’s 16 state governors will meet again on Jan. 7 to discuss whether the measures should remain in place or even be tightened.

According to government data, roughly 70 percent of the country has been fully vaccinated.