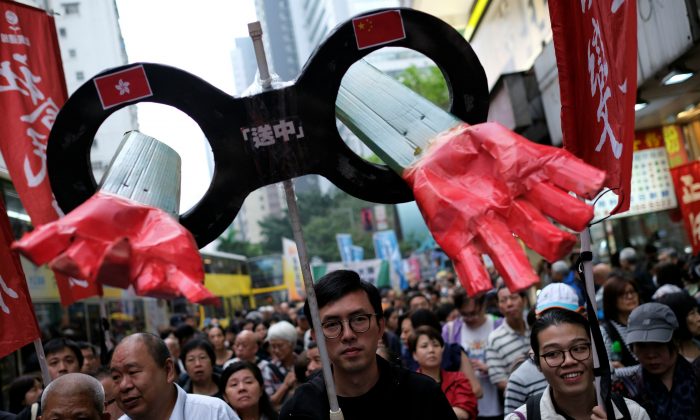 HONG KONG—Thousands of people protested in Hong Kong on March 31 against a government plan to change extradition laws, fearing an erosion of personal freedom and the city’s status as an international business hub.

The Hong Kong government proposal, announced in February, would grant the city’s leader executive power to send fugitives to jurisdictions not covered by existing arrangements, including mainland China, Taiwan, and Macau, to be determined on a “case-basis.”

Protest organizers said 12,000 people took the streets, while police estimated the crowd at 5,200 at its peak.

“Hong Kong people all have to bear the negative consequence of this ordinance. This carries the risk of personal freedom being restricted,” Lam Wing-kee, a bookseller who said in 2016 he was detained by Chinese agents, told the crowd.

The government said last week it will present the amendments to legislators on April 3.

The proposed changes were sparked by a high-profile murder in Taiwan last year, in which a Hong Kong man allegedly strangled his pregnant girlfriend during a holiday and fled back to Hong Kong.

However, it’s the addition of mainland China in the reforms that has triggered strong opposition by some lawmakers, legal and rights groups, who fear that it could be exploited by Beijing’s Communist Party leaders and hurt Hong Kong’s judicial independence.

“We are gravely concerned that anyone extradited to China will be at risk of torture and other ill-treatment and other grave human rights violations,” Amnesty International, Human Rights Watch, and Hong Kong Human Rights Monitor wrote in an open letter to Carrie Lam, the city’s leader, on March 31.

Since Hong Kong reverted from British to Chinese rule in 1997 with the guarantee that it would enjoy a high degree of autonomy and freedoms not allowed in mainland China—a policy known as “one country, two systems— there has been no formal mechanism for the surrender of fugitives to mainland China.

Hong Kong Secretary for Security John Lee told reporters last week the government had no plans to scrap the bill.

“It is not an easy decision, but it is a cautious, careful, and serious decision,” he said, adding that the Hong Kong government “has the sole right to decide whether or not to process (extradition requests).”

“What the Hong Kong officials are doing is not closing a loophole, but destroying the firewall that provides protection for us. When they attack this firewall squarely, it is equivalent to destroying the ‘one country, two systems’ policy which would eventually lead to our self-destruction,” Chan said at a press conference on March 24.

Dixon Sing Ming, associate professor of social sciences at Hong Kong University of Science and Technology, pointed out that the Chinese regime could exploit such laws during diplomatic or other disputes with Western countries.

“Any Western political or business figure who travel via Hong Kong may be targeted for extradition,” he said at the same press conference. “Hong Kong will no longer be a politically neutral place independent of the influence from mainland China.”

Hong Kong’s business community has also expressed concern over the inclusion of economic and financial crimes in the bill. The government later removed nine types of crime relevant to bankruptcies, financial trading, and intellectual property.

But there is still a risk of rendition to jurisdictions that do not share Hong Kong’s level of “protections for the legitimate rights of defendants,” the American Chamber of Commerce in Hong Kong said.

“We strongly believe that the proposed arrangements will reduce the appeal of Hong Kong to international companies considering Hong Kong as a base for regional operations,” the chamber said in a statement on March 29.