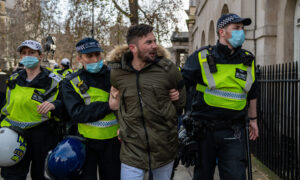 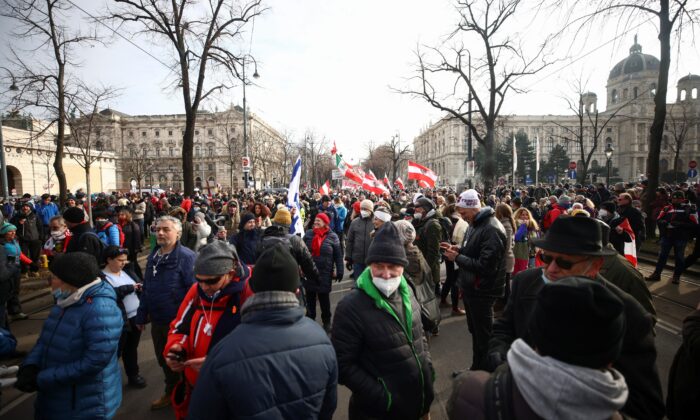 People gather to protest during a demonstration against the coronavirus disease (COVID-19) measures and their economic consequences in Vienna, Austria, on Jan. 31, 2021. (Lisi Niesner/Reuters)
Europe

VIENNA—Thousands of protesters against COVID-19 lockdown measures faced off with police in riot gear in Vienna on Sunday.

Vienna police banned numerous protests planned for this weekend, including one by the right-wing Freedom Party on Sunday, on the grounds that protesters have generally failed to observe rules on social distancing and often not worn face masks.

Since Dec. 26, Austria has been in its third national lockdown, with non-essential shops and many other businesses closed and their staff unable to work.

Freedom Party deputy leader Herbert Kickl on Saturday accused the conservative-led government of banning criticism in general. He urged his supporters to go on a walk in the capital instead of attending the banned protest, and to “articulate their displeasure peacefully”.

The affiliation of many of Sunday’s protesters was not immediately clear.

Some of them, however, expressed support for the Freedom Party, and many opposed conservative Chancellor Sebastian Kurz, chanting and waving banners saying “Kurz must go”. Many carried Austrian flags.

The crowd, which police estimated at 5,000, gathered on a square in central Vienna across the central ring road from the former imperial palace as well as from the offices of Kurz and President Alexander Van der Bellen.

Rows of police in riot gear and face masks prevented the crowd from marching down the ring road.

After riots in the Netherlands apparently set off by the introduction of a night-time curfew, Austrian police avoided escalation despite having ordered the crowd to disperse, and the atmosphere was tense but peaceful.

A Reuters witness saw police make some arrests and estimated the size of the protests at thousands. Police confirmed arrests had been made without giving numbers.

By Lisi Niesner and Francois Murphy