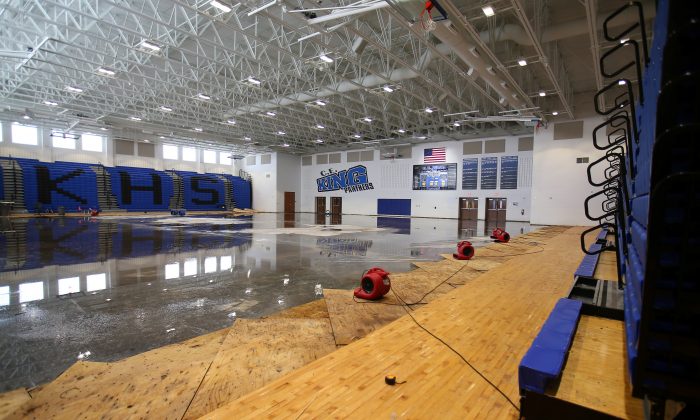 After removing the wood flooring flood waters remain inside the gymnasium at C.E. King High School following the aftermath of tropical storm Harvey in Houston, Texas on Sept. 8, 2017. (REUTERS/Mike Blake)
US

HOUSTON—More than 55 public school and charter districts in Texas remained closed on September 8, officials said, and tens of thousands of the state’s students must be relocated to unfamiliar schools this year after Hurricane Harvey damaged their homes or classrooms.

In some districts, officials still have not said when schedules can resume. An as-yet undetermined number of schools will remain too damaged to use for much of the year, adding more uncertainty to families recovering from Harvey’s aftermath.

The Texas Education Agency (TEA) said nearly 10 of the 55 districts that are closed will remain so until further notice. In Houston, the seventh largest U.S. school district, the first day of school was set for Monday, though many schools will remain shut due to flooding damage.

Some Houston school buildings will not reopen this year. Students from nine schools that suffered the worst damage will start classes after being relocated to temporary campuses, officials said.

Earlier this week, he said many as 20,000 students could be affected through 20 campuses.

In Aransas, Texas, near where the storm first made landfall, every school building received some damage, officials said. In nearby Corpus Christi, a spokeswoman said the district has received 118 new students from other regions, who have been displaced by the storm. She added that the number could grow.

Planning is difficult in Texas, where students can show up to a neighborhood public school and enroll on the first day. State and federal laws allow displaced students to attend the school nearest their temporary home or be bused to their original school, according to the TEA.

“Part of why we want to open this week is about who shows up and who doesn’t,” he said.

In Port Arthur, Texas, classes are scheduled to begin Sept. 18. In nearby Beaumont, the school district, with nearly 20,000 students, is still assessing damages.

Opening classrooms for the first time is a must to help students adjust, said Anna Caudle, who works at a YES Prep high school. She met some YES Prep students while volunteering at a Houston emergency shelter.

“I saw some of my kids’ faces light up when they saw me,” she said. “Their first question was ‘When does school start back up? I want to be at school.'”