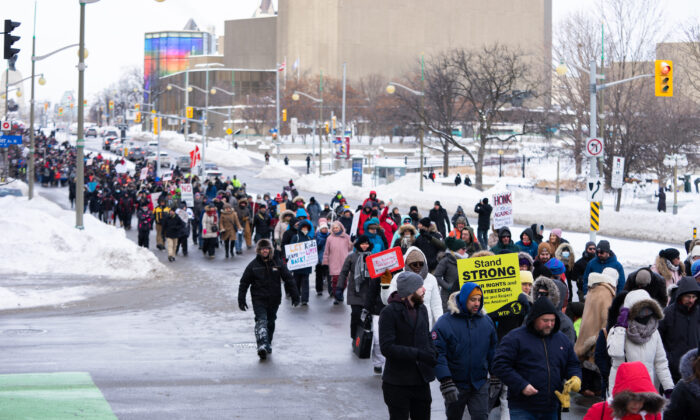 Demonstrators march in protest against COVID-19 mandates and restrictions in Ottawa on Jan. 22, 2022. (The Canadian Press/Michael Chisholm)
Canada

Thousands of Canadians protested against COVID-19 mandates and restrictions on Jan. 22 as part of the World Wide Rally For Freedom demonstrations that took place in 34 cities across the country and more than 180 cities around the world.

The rallies focused on advocating for individual freedoms, and in protest to many of the COVID-19 restrictions and mandates such as vaccine passports.

Attendance at the rallies ranged from a few hundred to several thousand with huge turnouts reported in major cities such as Toronto, Vancouver, Ottawa, and Calgary.

Christina Dankert, who attended the demonstration in Guelph, Ont., said she attended the protest to uphold personal freedoms.

“I went to the rally today for my kids, family, and friends and even the stranger walking past me on the street,” she told The Epoch Times. “I went to have a voice and to show it’s okay to ask questions when things don’t seem right. This is about our freedom to choose what is right for each and every individual in our country and the world. No one can take that sovereignty away and we all need to choose love over fear.”

Bill Cheung, who was among the over 3,000 participants of the demonstration in Vancouver, said he has lost his job because he has chosen not to get a COVID-19 vaccine.

“I’m here because I just want to protest. Because what’s happening is ridiculous,” he said. “We’re required to take these vaccines, and if we don’t take them, we could become unemployed. We can’t go to places that we should be able to. Our basic human rights have been taken away.”

Brian McLachlan, co-chair of the rally in Nelson, B.C., told The Epoch Times that he was impressed with the turn out of the event in his city.

“Everyone was just absolutely ecstatic and happy. It was just overwhelming. We had music. We had speakers. It was absolutely fantastic,” he said.

Bettina Engler, a national coordinator of the protests, was among the participants of a European forum which came up with the idea for the World Wide Rally for Freedom, and helped to bring the events to Canada.

“When I look especially at the European movement, it’s so powerful,” she said in an interview. “Finally, I really think Canada is waking up now. It was very sleepy when we started those rallies a year ago.”

Engler says initially many Canadians were worried about privacy concerns brought about by the COVID-19 mandates. That concern was later exacerbated by inconsistencies in government messaging on health orders, she said.

“I think the first turning point was the [BC government] announcement Sept. 13 about the Vaxx Pass and that you have to show it wherever you go, this QR nonsense,” Engler said. “And then people start thinking about why do I have to disclose my private information? And number two, why do I have to get these booster shots all the time?”

Several of the rallies in Canada had speakers representing different trucker groups joining convoys to protest vaccine mandates for truck drivers crossing the border which came into effect on Jan. 15.

At the Vancouver rally, several who took to the podium were from the medical field including doctors who are travelling across British Columbia talking about whether it makes sense to give children COVID-19 vaccination.

“Children are at a statistically zero risk of side effects for COVID,” Dr. Anna Kindy said at the event. “There is no evidence that these vaccines prevent the spread of disease, no evidence, zero. We have evidence to the contrary. So we must get rid of these mandates and stop vaccinating your children.”

A handful of demonstrations will occur on Jan. 23. The next World Wide Rally For Freedom is scheduled for March 19.