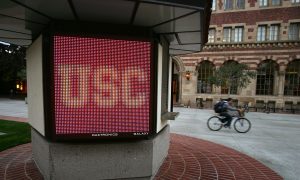 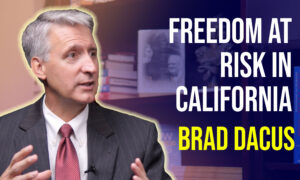 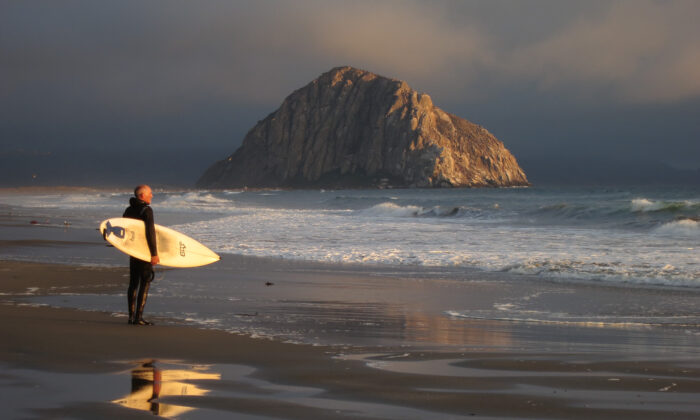 A surfer looks out at the Pacific Ocean as Morro Rock stands under evening sun in Morro Bay, Calif., on July 8, 2014. (Sean Gallup/Getty Images)
Northern California

A new survey of the ocean floor off the California coast revealed around 15,000 small craters referred to as “micro depressions.”

Eve Lundsten, a senior research technician at the Monterey Bay Aquarium Research Institute (MBARI), told The Epoch Times that some of the pockmarks are 400,000 years old.

“There’s some kind of episodic process happening on the sea floor here, but we don’t know what that process is,” she added. “We would really like to figure that out.”

They were discovered 30 kilometers away from the coast of Big Sur, an area that contains the largest pockmark field in North America.

The team of scientists involved with the project presented their findings at an annual meeting of the American Geophysical Union.

Lundsten indicated that a focused interest in the pockmark field began back in 1999 under the guidance of senior MBARI scientist Charles K. Paull.

That initial study was aimed at determining if methane gas, a leading theory for explaining the cause of pockmarks, was responsible for these sea floor features.

According to Lundsten (who wasn’t personally involved in the 1999 investigation), the study presented no evidence to confirm that hypothesis.

“That was sort of an interesting, strange result,” she said.

The nominal pretext for the 2018-2019 study — which required the combined efforts of the MBARI team, the Bureau of Ocean Energy Management, and the U.S. Geological Survey (USGS) — was the possibility of installing offshore wind farms in the area.

To confirm there was no evidence of methane gas — which might pose a threat to anchoring wind farms — a team of scientists, including Lundsten, conducted a geohazard assessment and a biological assessment of the area.

“Sometimes, if there’s methane in the shallow sub-surface, it can affect sea floor stability,” Maureen L Walton, PhD, a research geologist for USGS’s Pacific Coastal and Marina Science Center, told The Epoch Times. “So we want to understand if there’s any possible impact on the stability of the sea floor that you would be anchoring these wind farms into.”

Lundsten said MBARI offers a unique set of tools, like Autonomous Underwater mapping Vehicles (AUVs), that allow them to map the sea floor.

“They look like torpedoes,” she said, “and they fly unmanned, unconnected to the ship, collecting these really high-resolution maps, [in which] we found these much smaller holes that are more abundant and appear to be completely unique and unrelated to the pockmarks.”

Walton said they collected over seven meters of sediment that will help researchers detect the presence of methane gas or any other unusual fluids.

The report noted morphological and structural differences between the pockmarks and the micro depressions.

The micro depressions, or MDs, are generally around 11 meters across and less than a meter deep. A number of them contain trash and marine life.

Lundsten clarified that the MDs are not necessarily created by the trash: “[Although] we’ve seen a lot of trash in them, we don’t know if they’re created by rocks or objects falling on the sea floor. But they are definitely gathering debris and lightweight trash.”

The team retrieved clues about how the MDs are created, but they still have a lot of data to analyze.

“There [are] interesting scientific questions that we’re going to continue trying to answer with the data we’ve collected,” Lundsten said. “This is ongoing work.”

Noting the erosional features of the MDs, she speculated that one possible cause could be the currents.

“We’re excited to return to the site and try to get more answers,” Lundsten said.

“We have plenty of data to keep us busy — probably for the next couple of years, to be honest,” Walton said with a chuckle.