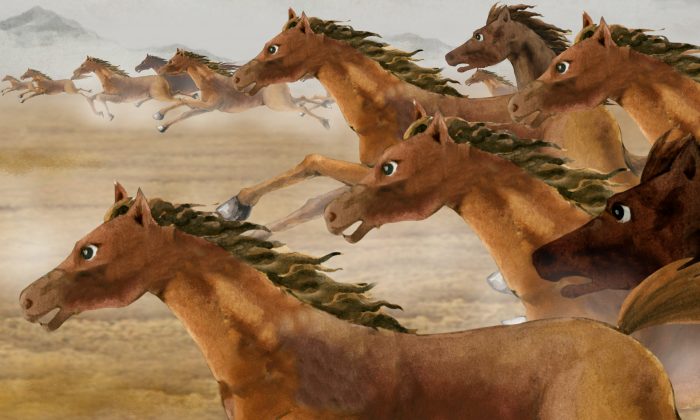 “Thousands of horses galloping ahead” is a Chinese metaphor for charging ahead at full steam. (Hua Kuo/Epoch Times)
China

Thousands of Horses Galloping Ahead

In his collection “Slapping the Table in Amazement (1),” Ling used the phrase “thousands of horses galloping ahead” to describe the sound of a heavy storm in a story about Guo Qilang.

In the story, Guo Qilang had inherited his merchant father’s wealth. Guo made even more money as a lender using high interest rates. Since he was known to take advantage of other people’s difficulties, he had few friends.

One day, he learned that Zhang, one of his clients, had earned a lot of money doing business in the capital. So he went to look for Zhang to get back the loan and collect the interest. Zhang received him warmly and not only returned the money, but also introduced him to a pretty prostitute.

While in the capital, everyday Guo spent a lot of money on wine and women. In no time, three years had passed and most of his money was spent. At the time, there were wars in the country and he dared not return home with what little money he had left.

He bribed an official and bought himself a position as the provincial governor of Hengzhou. Guo felt very proud of himself, as now he was going to have both money and power.

On the way to Hengzhou, he stopped in to see his mother and persuaded her to follow him. They set off to Hengzhou by boat, passing through cities and towns along the Yangtze River.

One night, while they were sleeping soundly in the boat, a fierce storm brewed. Guo woke up to a strange noise. It sounded like thousands of horses galloping forward in the sky and thousands of soldiers stomping through the trees. The heavy rain and strong wind frightened Guo and his entourage.

All of sudden, a gust of wind uprooted some trees and one huge tree fell on the boat. Guo managed to get to land, dragging his mother along, before the boat sank. His money, the governorship certification, their luggage, and their servants were all lost with the boat.

After the storm, Guo’s mother became very ill and died a few days later. With no money, no food, nowhere to sleep, and no friends to help him, Guo had to work as a helmsman to survive.

Ling Mengchu wrote this story to illustrate how unpredictable life can be, a warning that one should not be too proud when things go well nor too sad when things go badly. He also made no attempt to conceal the truth in his stories and exposed the corrupt customs of his day.

The phrase from the story, 萬馬奔騰 (wàn mǎ bēn téng), was later used by Qing Dynasty writers in their works to describe the strength and impetus of soldiers or other magnificent scenes. It is now a Chinese idiom with a meaning similar to the English phrase “going at full steam.”

Note:
“Slapping the Table in Amazement,” composed around A.D. 1628, is a collection of short stories that vividly describe the life of the times. The collection was divided into two sections, with about 40 stories in each section.