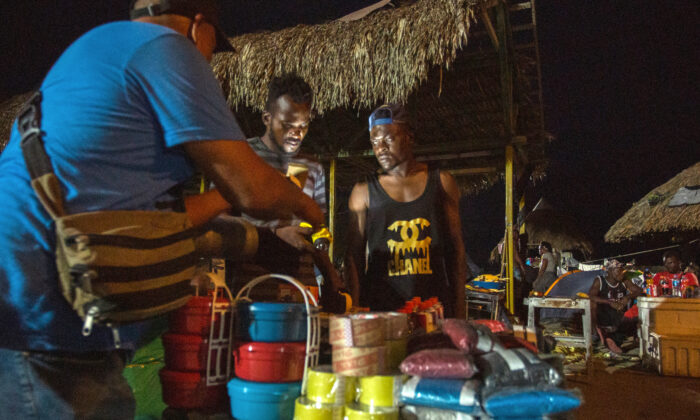 Haitians buy supplies at an open market in Necocli, Colombia, on Oct. 12, 2021. (Alejandro Gomez for The Epoch Times)
Americas

Thousands of Haitians Leave Colombia for the United States

Undeterred by a dangerous trek across the Darien Gap, Haitians continue their journey to the US border
By Autumn Spredemann

NECOCLI, Colombia—In the Colombian beach town of Necocli, thousands of Haitian migrants live in a makeshift tent city while waiting to cross the Gulf of Uraba into Panama through the Darien Gap. While Necocli always has been a stopover point on the caravan route to the United States, the number of migrants has increased dramatically since President Joe Biden took office in January.

Local estimates suggest as many as 20,000 migrants inhabit the camp.

The passage beyond Panama is a small step in a long journey that, for the majority, begins in Brazil or Chile, with the ultimate objective of crossing the border into the United States.

Ysmay Cherimont, 27, a Haitian migrant who has lived in the tent camp for a month, spoke to The Epoch Times about his plans: “I lived in Valparaiso [Chile] four years before coming to Colombia. It’s not good to live there. Too hard and too expensive. I want to live in the U.S.”

He explained that he, like many others, initially migrated to Chile due to the easy immigration policies that existed there before 2018. A mass exodus of Haitians from their country occurred after a 7.0 earthquake in 2010 devastated the nation’s infrastructure and was further complicated by Hurricane Matthew in 2016.

Chilean President Sebastián Piñera initiated stricter immigration reforms in 2018 that made it harder for migrants to enter the country. According to Cherimont, it can take months to be granted even a temporary visa to work in Chile, because of the volume of immigrants applying to live and work there.

When asked how he procured the means to journey to the United States, Cherimont said: “My family sends some money and I work,” while pointing to a small table arranged with items for sale, including bug spray, rain ponchos, clear packing tape, and headlamps. Cherimont also confided that if he makes it across the U.S. border, he wants to live in Boston.

“I want to study at university, and I also like the American sports [teams] there.”

Cherimont also claimed to have family living in Boston and Miami.

Dozens of the Haitians who spoke to The Epoch Times had also left Haiti years ago and were living in Chile or Brazil. On the Mexican side of the U.S. border, where illegal immigrants prepare to cross the Rio Grande into the United States, piles of discarded identification cards and passports can be found every day. Many have been told it’s harder to get deported from the United States without ID.

Leaving Colombia by Any Means Necessary

Migrants looking to cross the Darien Gap from Necocli and continue along the caravan route to the U.S. border must buy one of two types of boat tickets.

The first option is run by an official ferry service that normally takes tourists to Capurgana, which is situated at the entrance of the Darien jungle and costs US$45. However, migrants are required to wait a minimum of 30 days to travel due to the availability of boats. The second ticket can cost as much as US$400, but offers the allure of faster travel across the Gulf of Uraba. A migrant could leave the next day, but must be prepared to travel at a moment’s notice in the dead of night—this boat service is run by Colombian narco-traffickers.

Jorge, 51, who requested not to have his full name published for fear of reprisals, is a Venezuelan immigrant who acts as a sort of peacekeeper in the migrant camp.

“We have no thieves in this camp. No rape, no crime. If someone commits a crime,” he told The Epoch Times, before pausing and lifting his machete for emphasis, “they will be punished.”

When it comes to entering Panama illegally, Jorge is an expert and knows how the narco-traffickers run the night boats. Migrants trekking through the Darien jungle are a booming side business for the traffickers, Jorge says.

“They come, sometimes at 3 a.m. or later, and you must be ready to go. Everyone knows this. Otherwise, you wait. There can be no schedule [because of police].”

Jorge said the night boat is appealing to many since it costs an average of US$400 or more to live in Necocli for a month. However, the expensive boat ticket can also be a dangerous one. He explained that on Oct. 11, one of the unofficial boats crossing the gulf capsized in the night, killing three Haitian migrants and stranding 20 others. The survivors were rescued by the Colombian Navy.

“They all want to go to the U.S.,” Jorge said, making a sweeping gesture toward the multitude of tents occupying the beach.

Avis Joseph, 30, a Haitian migrant who has lived in the camp for only a week, says he’s anxious to leave.

“I want to go [across the Darien Gap] as soon as possible,” Joseph told The Epoch Times. He said it can take up to 15 days to cross the gap, depending on the number of children and mobility-challenged people in the caravan. Joseph said the “guides” who help migrants cross into Panama illegally prefer to keep everyone together.

Joseph said he left Haiti a few years ago. After spending four months living in Chile, he relocated to the city of Manaus in Brazil, where he lived before coming to Colombia. Roughly a third of the migrants living in Necocli arrived from Brazil, which has a lenient immigration policy for Haitians. Regardless, migrating to the United States is still the brass ring for most of the migrants, including Joseph.

“I want to live in Orlando. My mother lives there, and she can help me with the [immigration] paperwork,” he said.

Helping Necocli Deal With the Influx

In August, the Colombian Red Cross (CRC) stepped in to facilitate basic resources for the migrant camp and help the town’s struggling infrastructure, chief among these being the limited freshwater supply.

“The freshwater system was fragile even before the migrants [arrived], in all of the Necocli region,” Jorge Ignacio, chief coordinator for the CRC in Antioquia department, told The Epoch Times.

Ignacio said the migrants lack access to showers and toilets, and there is no city sewage or drainage available at the camp, which has created a significant health crisis. Migrants improvise latrines by digging open pits on the beach and covering them with tarps for privacy.

Subsequently, Red Cross workers have treated migrants, many of whom are young children, who suffer from sanitation-related diseases and skin disorders. Ignacio and his team offer a variety of amenities to the migrants including basic health services, wireless internet, phone charging stations, educational classes, and psychological counseling.

“We also pay to bring in water trucks so they [migrants] have access to fresh water,” Ignacio said, pointing to several large, portable cisterns situated at intervals throughout the camp.

The communications coordinator for Ignacio’s team, Carmen Quintero, has treated many of the sick women and children who come to the organization’s field tent daily.

“I don’t feel safe working here,” she told The Epoch Times. “Nothing about this situation is safe.”

She also confided that the Red Cross team feels overwhelmed, describing a long line of migrants waiting for their services every day when the facility opens at 7:30 a.m.

A Guide by Any Other Name

Sitting on a boat dock near the migrant camp, Jorge explained how the Colombian drug traffickers not only offer ferry service across the gulf, but also act as guides.

“They come here [to the camp] and ask if anyone wants to cross Darien,” he said. Jorge said it costs migrants upwards of US$5,000 to make the journey from the Darien jungle to the Mexican side of the U.S. border.

“The guides have to pay people along the way,” Jorge replied, when asked why it was so expensive.

Migrant smugglers, or “guides” as Jorge called them, are known in many parts of Latin America as “coyotes.” In Necocli, the coyotes only advertise their services in person, and they must be discreet because of a heavy naval presence near the town.

Back in the camp, Cherimont continues to sell items to other migrants from his table and said he plans to stay another month to collect more money before crossing the gap. After being asked why he wants to immigrate to the United States, he smiled and said: “It’s the dream. To live in America is a dream.”