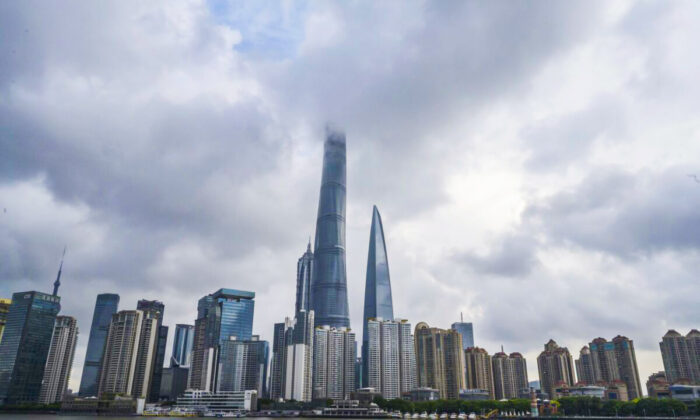 A boat travels on the Huangpu River as the skyline of the city is seen, including the Shanghai Tower, in Shanghai, China, on Aug. 28, 2020. (Kevin Frayer/Getty Images)
INSIDE CHINA

Employees of the well-known company Quanta (Shanghai) Computer Co., Ltd., which produces Tesla accessories and Apple laptops, revealed to The Epoch Times recently that thousands of workers were infected, and their calls to the outside world for help were silenced.

Shanghai, an eastern Chinese megacity with 26 million residents, has been locked down for more than three weeks, severely impacting the Chinese economy and the international supply chain. On April 16, Shanghai officials issued the “Guidelines for the Prevention and Control of the Epidemic of Industrial Enterprises Resuming Work and Production” to push for the resumption of production in manufacturing.

However, according to employees of Quanta Computer, the company is still facing COVID-19 infections at the workplace.

An employee surnamed Li of Quanta Computer told The Epoch Times on April 19 that he was living in one of the Quanta factory dormitories where many people had tested positive for COVID-19.

“There are positive cases in the dormitory next door to me. No one was taking care of the confirmed patients, and they are not being transported to hospitals. Cross-infection occurred in the dormitory,” he said. “There are more than 40,000 people in the factory. Thousands have been infected.”

He said that with so many confirmed cases, “alarms have been installed on all the dormitory doors, but they do nothing about the risk of cross-infection in public areas in the dormitory, nor do they disinfect them.

“It is useless to put the alarms,” he said. “Is it to prevent us from going out?”

Li said: “In the dormitory building, drinking water facilities and toilets are shared. I don’t know what (pandemic prevention) measures the factory has taken.”

“For doing the COVID-19 nucleic acid test, so many people are pulled out at night,” he said. “More than 2,000 people in the building would be infected, and no one takes any [prevention] measures. When will the lockdown be lifted?”

Another Quanta Computer employee surnamed Lin, told The Epoch Times on April 19 that the factory has now banned employees from speaking about the outbreak to the outside world.

“In a factory with tens of thousands of people, the factory has banned everyone from speaking up. There is chaos here,” she said. “Some people in the factory area have resumed work, and the rest are still in isolation in the dormitory. Those testing positive are put in dormitory building A for isolation, and some are sent to isolation centers outside Shanghai. The COVID-19 nucleic acid testing has stopped for several days.”

Another employee surnamed Liu at the Quanta Computer factory told The Epoch Times, “The company’s last test for nucleic acid was on April 13, and on April 14, they transferred some people to other places, and no nucleic acid testing has been done since then.

“Now, there are a lot of people who have cold-like symptoms in the dormitory,” Liu said.

The Epoch Times called Quanta Computer Company, Shanghai CDC, and the city’s 12345 hotline to inquire about the matter but no one answered the phone.

Zhao Fenghua and Hong Ning contributed to the report.