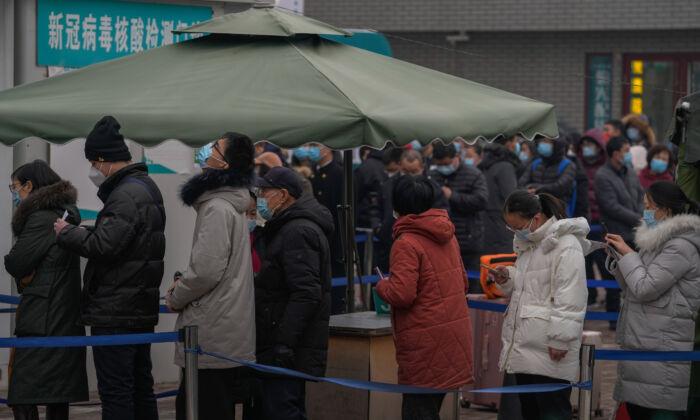 A large number of Beijing residents encountered a blank health code in the past three days. Thousands of people waited in line on the evening of Jan. 28 to take a PCR test for the CCP (Chinese Communist Party) virus, when the temperature was as low as 1.4 Fahrenheit.

Chinese authorities have been relying on big data and mobile technology to track people’s movements for pandemic control. Those who become close contacts or even secondary contacts of a confirmed COVID-19 patient would get a red or yellow health code, indicating one’s risk level.

The Beijing Municipal Health Commission announced on Jan. 28 that all public hospitals in Beijing with PCR test capabilities will set up a dedicated test zone for those citizens who got a blank code. The health code app will then reset the status based on the test result.

On the same day, Chinese state media Beijing Youth News revealed more details about why people are getting this unusual result.

According to the article, those who experienced a blank code status also received a SMS reminder from the health code app, saying that, “As you may have recently visited or passed through areas designated as risky for the pandemic, Beijing Health Code System cannot confirm your current health status at the moment. According to Beijing’s epidemic prevention policy, if you are currently in Beijing, please contact the community where you live immediately; if you are outside Beijing, please suspend your visit to Beijing.”

The article further explained that those who received this SMS reminder fall into three categories: people who have been to the medium- and high-risk areas within 14 days; people who recently arrived in Beijing but have not been tested for the virus after 72 hours of arrival; those who have purchased four types of drugs including antipyretic, cough, anti-infection, and treatment of dry throat since Jan. 1.

Beijing has conducted mass testing three times recently, but so far, only the first test results have been released.

In China, one has to present a green health code to visit different places. Otherwise, with a yellow or red code, or an uncertain status, the user will be suspected of being infected with the virus and will have to go take a PCR test to restore a green code.

Real Situation in Beijing Before the Olympic Games

It’s now less than a week leading up to the Beijing Winter Olympic Games, which take place Feb. 4–Feb. 20, 2022. Beijing authorities have been on high alert since the beginning of the year. On Jan. 22, municipal authorities required all districts to maintain an “all-round emergency state,” acknowledging that Beijing faces serious challenges from both Delta and Omicron variants.

In addition, the new round of outbreaks in Beijing has spread to the districts of Xicheng, Haidian, Chaoyang, and Daxing. Mr. Li, a resident of Haidian District, told The Epoch Times on Jan. 27 that his community was sealed off and he could only stay at home. He didn’t know anything about who and how many in his community were infected at all.

Another resident, Minghua (pseudonym), of Chaoyang District, also told The Epoch Times that his community was placed under lockdown on Jan. 24 in the morning. “I later found out from a public notice that it was because one person [from our community] tested positive in the centralized quarantine site. We have no idea when the lockdown will be lifted,” he said.

The outbreak in Beijing has also spread to other parts of the country. Chinese public health authorities admitted that new virus cases in five cities of four provinces are related to Beijing’s confirmed patients. These cities include Jinan and Liaocheng of Shandong Province, Datong of Shanxi Province, Baoding of Hebei Province, and Shenyang of Liaoning Province.

By Jan. 28, at least 15 provinces and municipalities in China have reported a new round of virus outbreaks.

Ms. Liu from Langfang City, Hebei Province, told The Epoch Times that her community was closed without notice, and no one could get out. She also heard that there are confirmed cases in several communities in Yanjiao, a town under the jurisdiction of Hebei Province and bordering Beijing, known as Beijing’s commuter town.

In Hangzhou, the capital city of Zhejiang Province, citizens took PCR tests in the rain at midnight on Jan. 27.

Local resident Mr. Wang revealed that many buses were parked in his community, ready to take people away to an undisclosed location for quarantine. “The speaker outside is making the announcement all the time. I am very scared. The authorities’ ‘one size fits all’ approach is terrible,” Wang said. “What is really frightening now is not the virus, but the ever-changing policies of the authorities.”

Liu Yun (pseudonym), a migrant worker in Hangzhou, is one of many who have been forcibly taken to a quarantine hotel in the city.

“With much effort, I managed to get a ticket to return home on Jan. 29, but now all of us are not allowed to return home for the Chinese New Year,” he said. “I haven’t seen my child for a year. I bought a lot of things for my child. I think I can only mail them instead. I am suffering a mental breakdown! How can it be called a New Year celebration in these two years? It is simply a torment!”