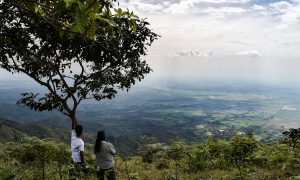 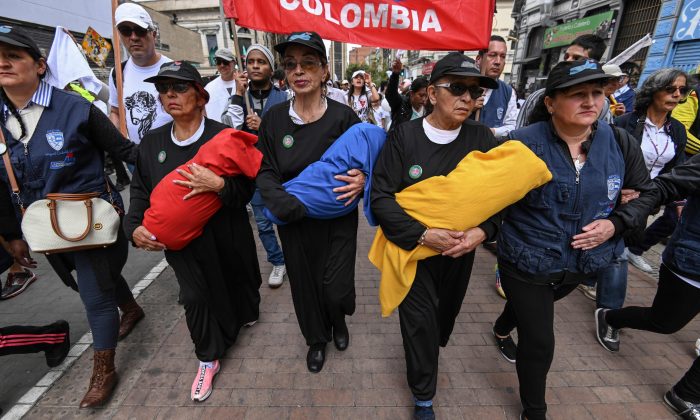 Demonstrators take part in a march against terrorism, in repudiation of the police academy recent car bombing, and in support of the victims and their relatives, on Jan. 20, 2019. (Juan Barreto/AFP/Getty Images)
Americas

With t-shirts, balloons, and white flags, the protesters walked down an avenue to gather at the historic Plaza de Bolívar, in downtown Bogotá, to honor the victims with a minute of silence. Similar marches occurred in the cities of Medellín, Cali, and Barranquilla.

“It is a symbol of patriotism, of civility, of union, today we are here as simple citizens rejecting terrorism, rejecting violence, showing the world that this united country is invincible,” Colombian President Iván Duque told Reuters during the march.

The Jan. 17 attack against the General Francisco de Paula Santander Cadet School, the training center for officers of the National Police, was committed with a car loaded with 80 kilos (175 pounds) of explosives.

In the attack, the worst of its kind in the last 15 years in Colombia, 20 cadets—people between 18 and 23 years old who aspired to become National Police officers— were killed, along with the driver of the vehicle, which belonged to the ELN.

“Colombia yes, terrorism no,” and “No more police or military killed by terrorism,” shouted the participants in the protest, many of whom approached the police to embrace them as a sign of support.

The ELN, which has some 2,000 members and is considered a terrorist organization by the United States and the European Union, is radical, has a diffuse chain of command and dissent among its ranks, which according to security sources and analysts makes it difficult to reach a peace agreement.

The Marxist group, founded by radical Catholic priests in 1964 and inspired by the Cuban revolution, hasn’t claimed responsibility for the attack or issued a public statement.