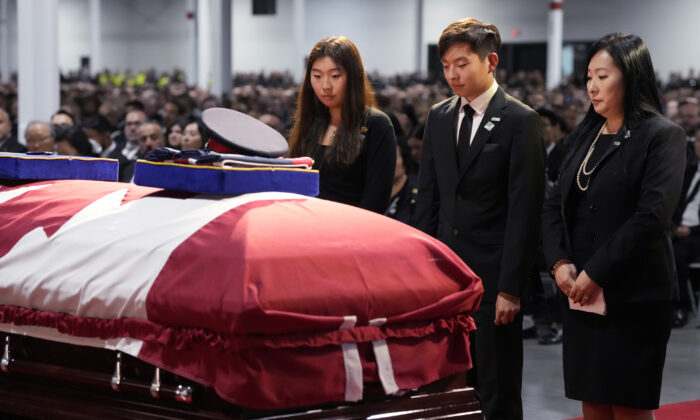 Jenny Hong, wife of Toronto Police Const. Andrew Hong, and her children Mia and Alex bow at his casket during his funeral service in Toronto on Sept. 21, 2022. (The Canadian Press/Frank Gunn)
Canada

Thousands were in attendance at the Toronto Congress Centre (TCC) at 12:10 p.m., where Hong’s funeral was held. It was closed to the public but viewable by others live-streamed on the internet.

People lined up over different Highway 407 overpasses along the route to watch the hearse pass by on its way to the TCC from the funeral home.

Ford mentioned how Hong lit up the room with his personality. “Andrew was made of steel on the outside but had a heart of gold on the inside,” Ford said in a speech at the funeral.

“To do these jobs, to commit your life protecting others is the highest calling,” Ford continued. “The sacrifices these families make are more than most of us could ever know, and sometimes these heroes make the ultimate sacrifice as Andrew did.”

Hong was 48 years old and a 22-year veteran with the Toronto Police.

He was the first slain during a shooting rampage where 40-year-old Sean Petrie allegedly waited in Tim Horton’s for over two hours before shooting Hong at close range in an “ambush attack.” Police believe that Petrie was waiting for an officer to shoot. Hong was on a lunch break from a training exercise, getting his colleagues a round of coffee.

Police say the shooter fled to a parking lot across the street, where he allegedly shot another victim and stole his car. He then took the stolen car and drove it to an autobody shop, where he allegedly shot and killed two other people and injured one more. The shooter was later shot and died of his injuries during a skirmish with police trying to take him into custody, according to the police press briefings.

Family Reflects on the Tragedy

Multiple speakers at the funeral mentioned how Hong’s nickname was “the Honger” and how he was such a big, gentle, and friendly person. He was remembered for his hugs and sense of humour.

His wife said he loved food, video games, fishing, motorcycles and airplanes. It would have been their 21st wedding anniversary on Sept. 22. She said he loved being on the motorcycle unit with traffic services and getting to be a trainer. “I can’t believe they pay me to ride a motorcycle,” he would tell his wife after he came home from work.

“In his early years, it was a lot of lifting and hitting the gym, but as he got older, his love for his muscles and cars turned into his love for his wife and kids,” his daughter Mia said at the funeral. “He went from a stick shift Volkswagen GTI to an 8-seater minivan.”

Toronto Police Chief James Ramer said the attack on Hong was an attack on the entire police community.

“As police officers, we have all taken this same oath to answer the call, to put the safety of others before our own,” he said.

“The circumstances of Andrew’s death illustrate that to do so, in our profession, can come at a terrible cost. And indeed today, we also pay tribute to the other innocent victims of this senseless tragedy.”

During the ceremony, the Korean traditional folk song “My Beloved One,” which speaks to having courage in the face of hardship, was performed by the Korean Traditional Music Association of Canada at the funeral.

A TPS press release says, “nearly 300 motorcycle officers from about 25 Canadian and American police services took part in the procession.”

David Wagner
Follow
David Wagner is an Epoch Times reporter based in Winnipeg.