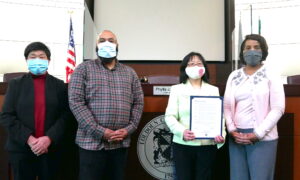 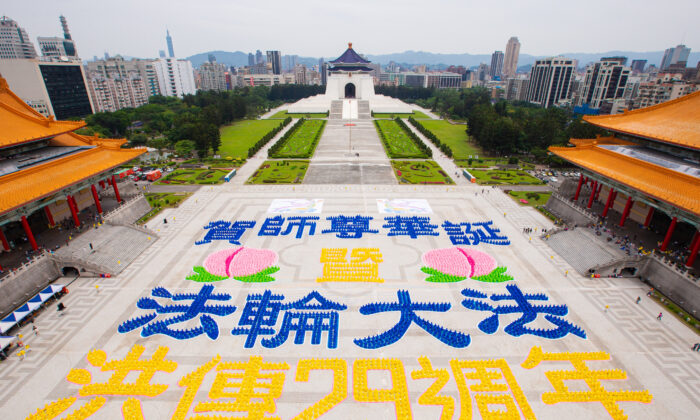 About 5,200 people gather to take part in a character formation at Liberty Square in Taipei, Taiwan, on May 1, 2021. (Chen Po-chou/The Epoch Times)
Chinese Regime

TAIPEI, Taiwan—About 5,200 Falun Gong practitioners in Taiwan adorned in colorful outfits gathered to sit in the iconic Liberty Square in Taipei on May 1, creating an immense image to commemorate almost three decades since the spiritual practice Falun Gong was made public.

The participants were arranged to form a short phrase in traditional Chinese characters. The message wished the founder of the practice, Li Hongzhi, a happy birthday and highlighted the 29th anniversary of the day that Falun Gong was introduced to the public in China.

Li introduced the spiritual discipline in northeastern China 29 years ago on May 13, which is also his birthday. Since 2000, the date has been celebrated by Falun Gong adherents and supporters as World Falun Dafa Day.

The discipline, also known as Falun Dafa, consists of five meditative exercises and moral teachings centered on the principles of truthfulness, compassion, and forbearance.

More than 5,000 #FalunGong practitioners gathered in #Taipei on May 1 to form huge characters and lotus seed buns-quite a feast to the eyes

They want to tell people that despite #CCP persecution and disinformation, #FalunDafa is still popular worldwide and now in its 29th year pic.twitter.com/iDYOYxUUvl — Frank Fang (@HwaiDer) May 1, 2021

Other adherents, who wore pink capes and hoods, formed two lotus seed buns. These buns, also known as “longevity peaches” in Chinese, are a common item served at birthdays for seniors to celebrate their accomplishments in having reached a ripe old age.

Above the Chinese characters were two heavenly beauties—images of angels often associated with traditional Chinese culture.

The formation was the result of three days of intensive preparation that began on April 28. Organizers set out color-coordinated mats to create the outline of the image, although their task became more difficult because of rain during the two days before the event.

The weather cleared by April 30, and on May 1, the sun emerged from behind the clouds at noon while participants were sitting on their assigned mats waiting for aerial photos to be taken. Shortly after, a ring of light, known as a 22-degree halo, appeared around the sun, dazzling the participants below.

Even after staging the annual event for more than 20 years, Taiwanese adherents are still seeking to make improvements, Huang Chun-mei, the event organizer and deputy chairwoman of the Taiwan Dafa Association, told The Epoch Times.

This year marked the first time that the image involved so many Chinese characters—14—which made coordination of the participants more challenging, according to Huang. In addition, the image of lotus seed buns was used for the first time.

The decades-old tradition didn’t originate on the island. It started in China in the 1990s, when Falun Gong adherents could still openly practice and hold public activities. But after the Chinese regime launched a nationwide persecution campaign involving mass arrests and hateful propaganda in July 1999, this activity has been kept alive by overseas adherents.

Aside from celebrating Li’s birthday and commemorating World Falun Dafa Day, Huang said the event serves as a rebuttal to the communist regime’s arrogance. At the start of the persecution, former Chinese leader Jiang Zemin confidently claimed that Falun Gong would be “eradicated” in three months. But more than two decades later, the discipline is still attracting new adherents, Huang said.

She added that it was in 1994, two years after Li introduced the discipline, that the first group of Taiwanese began practicing Falun Gong.

Wu Ching-hsiang, a retired architect who created the blueprint for the image, told The Epoch Times that the purpose of depicting two heavenly beauties was to convey a sense of universal jubilation associated with the day.

Holding such an event that involves thousands of people during the pandemic wouldn’t have been possible without the success of the Taiwanese government in preventing the spread of the CCP (Chinese Communist Party) virus, which causes the disease COVID-19, Wu added.

One participant, Debbie Tung, 28, a designer in graphic design and visual arts, said she has taken part in the annual event at least four times after she started practicing Falun Gong.

“I was blown away the first time I took part in it,” Tung said. “I found it very peaceful. As I was sitting there and listening to the music being played [by the organizer], I found a moment of serenity.”

Tung says said her mental and physical health have improved dramatically since taking up the practice, compared to other people in her age group. On top of this, her skill as a designer has improved, she said, adding that she often gets inspiration that seems to come from nowhere.

Jackie Lin, 48, a production planning manager at a semiconductor company, said he has taken part in the annual character formation many times since 2014. He said he has found a new purpose in life because of the practice.

Many locals stood nearby to watch as the event was unfolding.

Mrs. Wu, a housewife, said it was her second time seeing the character formation at Liberty Square. She described the scene as a “spectacular and grandeur” display.

Another local, Mr. Liu, a salesperson in the auto industry, said he was impressed by how orderly adherents were when they filed to their spots in the formation. It was the first time that Liu had seen the event in person, though he had seen pictures of the past events online.

Liu expressed concern for the ongoing persecution of the practice in China, describing it as “extremely inhumane.”

Taipei City counselor Lin Ying-meng called on Taiwanese people and neighboring countries to condemn the Chinese Communist Party (CCP) over its human rights violations, including those perpetrated against Falun Gong practitioners and Christians.

“I hope that Taiwan can be a safe harbor for all the different ethnic groups and people oppressed [by Beijing],” Lin said in an interview with the Taiwanese edition of The Epoch Times. “I hope that we can continue to provide assistance to people persecuted by the CCP.”