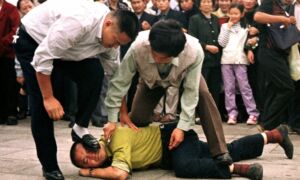 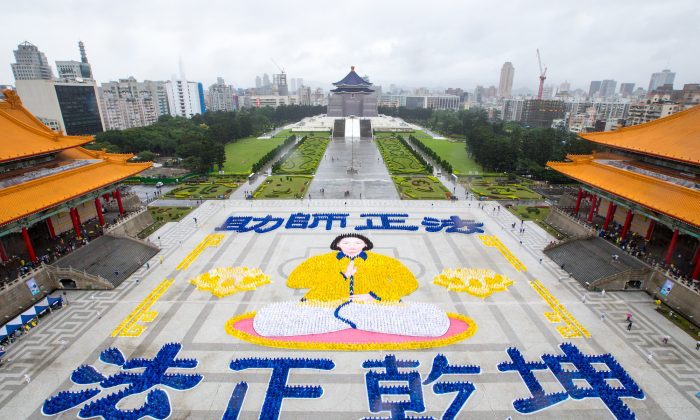 Over 6,400 practitioners of Falun Gong create a character formation in the image of a woman meditating in Taipei, Taiwan, on Nov. 25, 2017. (Bai Chuan/The Epoch Times)
China

Over 6,400 Gather in Taiwan to Form Massive Image of Falun Gong Practitioner in Taipei’s Liberty Square

Over three days of intensive labor, more than 100 local residents first laid down color-coordinated mats that created the outline of the image. Then, on Nov. 25, more than 6,400 practitioners of the spiritual discipline Falun Gong sat down for meditation in the formation.

Falun Gong, also known as Falun Dafa, is a cultivation practice. Adherents cultivate themselves—seek to improve themselves—through practicing slow, meditative exercises and living according to moral teachings based on the core principles of truthfulness, compassion, and tolerance. The ancient Buddhist practice was introduced to the public by Mr. Li Hongzhi in 1992, with lectures held throughout China. Mr. Li later traveled the world to give lectures, and outside China over a million people are believed to practice Falun Dafa. According to the website Minghui.org, a clearinghouse for news about Falun Dafa, tens of millions of people are practicing Falun Dafa inside China, despite 18 years of persecution.

The image included eight Chinese characters that expressed the wish that practitioners of Falun Dafa could help Master Li spread light and truth throughout the world. In Chinese, “master” is a common way for disciples to address their spiritual teacher or instructor.

Each of the characters, which are formed in an ancient Chinese clerical script, measures 68.9 feet wide by 52.5 feet long. Two lotuses—an important symbol in Buddhism—as well as ancient Chinese decorative motifs, fill out the rest of the formation.

Wu Ching-hsiang, a retired architect who was responsible for the blueprint of the character formation, said the image depicts what it means to be a Falun Dafa adherent. “A practitioner needs to meditate, sitting in the lotus position. And a practitioner also needs to erect his palm to send forth righteous thoughts,” said Wu. Righteous thoughts are a meditation “about cleaning up oneself, as well as cleaning up one’s nearby environment,” he said.

Citing a passage from “Zhuan Falun,” Falun Dafa’s main book of teachings, Wu said, “The Buddha-light illuminates everywhere and rectifies all abnormalities,” elaborating that a practitioner’s harmonious state would not only benefit himself, but also those around him.

Most of the participants were Falun Dafa adherents residing in Taiwan. But about 700 of them came from other countries and regions, including Canada, the United States, Germany, Netherlands, Japan, South Korea, Hong Kong, Macau, Vietnam, Thailand, Indonesia, Singapore, Australia, and New Zealand. The character formation activity, which has become a tradition held every November in Taiwan, dates back to before the Communist Party began persecuting the practice in mainland China in 1999. In Taiwan, people are free to practice their religious beliefs, including Falun Dafa.

In mainland China, the then-head of the Chinese Communist Party, Jiang Zemin, believed Falun Dafa’s popularity—a state survey in 1999 estimated there were more than 70 million adherents, though practitioners estimated the number was over 100 million—to be a threat to the Party’s atheist and materialist ideology.

The image and words of the character formation have another layer of meaning, according to Huang Chun-mei, the activity’s organizer and deputy chairman of the Taiwan Dafa Association. “I hope [the character formation] can inspire our society to become better and be more peaceful, and people can further improve their morality,” she said.

The character formation this year held additional significance, as it celebrated the 20th anniversary of Mr. Li’s first visit to the island, in 1997. Some of the practitioners who participated in the formation said they considered themselves especially fortunate to have attended the lectures given by Mr. Li in Taiwan that year.

Chen Hsin-lin, 55, an administrative staff member at Taiwan Television (TTV) who started practicing Falun Gong in 1996, said she was taken completely by surprise when Mr. Li unexpectedly showed up at TTV to meet with local practitioners on Nov. 15, 1997. About 10 to 20 practitioners there were fortunate to hear an hour-long lecture, according to Chen.

The next day, Mr. Li gave another lecture at Taipei Municipal Sanxing Elementary School, which was attended by about 1,000 practitioners. Before Mr. Li left Taiwan, he gave one final lecture at Taichung Municipal Wufeng Agricultural and Industrial High School on Nov. 20.

Jack Lee, 47, formerly a network management engineer who started practicing Falun Gong in early 1997, said he couldn’t remember precisely what Mr. Li had lectured about at the elementary school, but he vividly remembered the strong feeling when Mr. Li entered the hall.

“I remember when Master Li walked past me, because I had an aisle seat, I felt such a strong feeling of compassion,” said Lee.

Wu, 63, who started practicing Falun Dafa in 1995, said he was at both the elementary school and high school lectures. He recalls Mr. Li saying: “This Dafa is very precious. It is not just qigong. … You have to keep learning and cultivate yourself. You have to put your heart into it.” Wu said he walked away from the lectures knowing that he had to apply teachings in the Dafa books into words and actions in his everyday life.

Huang, who started practicing Falun Dafa in October 1995, said she saw Mr. Li speak in Beijing in 1996, at a conference for practitioners from around the world to talk about their experiences. According to Huang, she and a few other practitioners also visited Changchun, Mr. Li’s hometown in northeastern China, where he first began openly teaching Falun Gong in 1992.

“I remembered going to a plaza to do the exercises one morning in Changchun. And I was stunned to see there were over 1,000 practitioners. I asked a local coordinator if these people had come here [from all over China] for a special event. He told me no. This was about the same number of practitioners who show up at the plaza every day, and sometimes, even more practitioners show up.”

Coming From All Over the World

Currently, Taiwan is the only place in the world that holds such large-scale formations annually. For many practitioners from other countries and regions, participating in such an event is especially memorable.

“I think it helps to show the joy and beauty of Dafa,” said Logan Bauer, 37, a programmer from Oregon City in California, who took up the spiritual practice in 2009. He had suffered from chronic depression, but the illness disappeared after he began practicing Falun Gong.

Karen Dunscombe, 34, a small-business owner from Australia, said that before practicing Falun Gong, she led a miserable life as an atheist and would “put all the negativity onto everyone else.” Since taking up the practice, “my soul and my heart were replenished,” she explained. She realized “how beautiful people can become, when their eyes open to the world and high principles.”

“[The character formation] can show the people of China the positive values of Zhen, Shen, and Ren,” added Dunscombe, referring to the Chinese words for truthfulness, compassion, and tolerance.

For Jeong Ki Tae, 58, a research professor at Korea Advanced Institute of Science and Technology, Falun Gong helped him to better understand how to do his job as a researcher. Jeong, who started practicing Falun Gong in 2000, came with a group of 150 practitioners from South Korea to participate in the character formation.

“It is my honor to join this meaningful event—my great, great honor,” said Jeong.

Oanh Tran, 40, owner of a travel agency in Vietnam, said that organizing such large-scale activities in Vietnam is difficult because of interference from the Vietnamese authorities, who are influenced by the policies of their communist ally in China. Tran added that a contingent of about 400 practitioners from Vietnam had traveled to Taiwan.

For many tourists at Liberty Square, Falun Gong was not new to them. “I know about the persecution in the People’s Republic of China. In Taiwan, it is democratic, [with] freedom of religion,“ said Vladimir Baar, 64, a geographer from the Czech Republic.

Sabine Jacob, a clinical research coordinator in hematology-oncology in Los Angeles, said: “I am glad that the event is being held and that people can express themselves and their faith, and what they believe in.

“Those are the foundations our country builds on. And we are proud of that.”