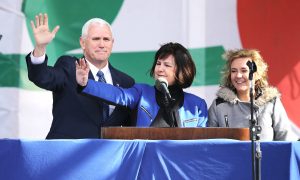 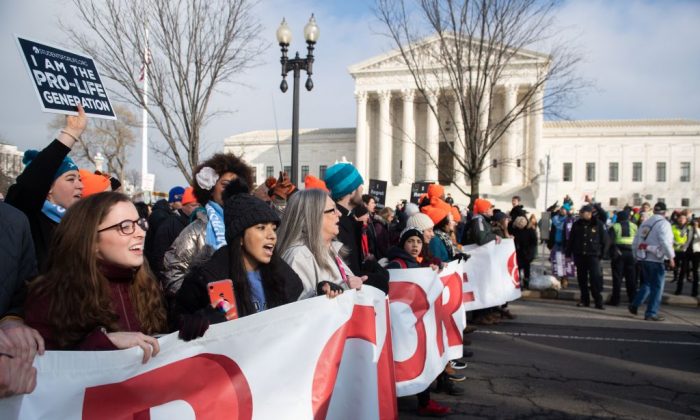 Pro-life supporters participate in the "March for Life," an annual event to mark the anniversary of the 1973 Supreme Court case Roe v. Wade, which legalized abortion in the U.S., outside the U.S. Supreme Court in Washington, Jan. 18, 2019. (SAUL LOEB/AFP/Getty Images)
Trump Administration

More than 100,000 Americans from across the nation gathered in Washington on Jan. 18 for the annual March for Life, as President Donald Trump pledged in a pre-recorded video message to veto abortion-supportive bills.

“If they send any legislation to my desk that weakens the protection of human life, I will issue a veto and we have the support to uphold those vetoes,” Trump said in the recorded message. “We know that every life has meaning and that every life is worth protecting.”

Ever since the Supreme Court handed down its decision on Roe v. Wade on Jan. 22, 1973, which made it legal for women to have an abortion up to her second trimester, the peaceful rally has been held every year to mark the anniversary. The theme for this year’s 46th march was “Unique from Day One: Pro-Life is Pro-Science.”

In a surprise appearance, Vice President Mike Pence addressed the crowd in person, pledging his support for pro-lifers and introducing the message from Trump.

According to the March for Life’s president, Pence was originally scheduled to only speak at the event’s 37th Annual Rose Dinner.

With his wife, Karen, by his side, Pence told rallygoers to remain strong and reiterated that the Trump administration is behind them.

“Know that you have an unwavering ally in this vice president, in our family, and you have a champion in the president of the United States of America,” he said.

Pence also spoke at the March for Life in 2017, marking the first time a vice president attended the event.

“We gather here today because we know we still have much work to do,” said Pence. “We urge you to stand strong. Stand with that love and compassion as you stand for life, and know that we will stand with you until that great day comes where we restore the sanctity of life to the center of American law.”

Trump has named a number of conservative judges and has signed anti-abortion legislation such as reinstating the so-called Mexico City policy, which bars U.S. foreign aid money from going to NGOs that promote or perform abortions.

Lipinski is one of the few Democrats in Congress who openly opposes abortion.

Meanwhile, the editor-in-chief of The Daily Wire, Ben Shapiro, headlined this year’s rally. A number of other speakers also spoke, including religious officials and professionals in the health care industry, such as Dr. Kathi Aultman, a fellow of the American College of Obstetricians and Gynecologists.

“A woman cannot kill her child and remain unscathed,” said Aultman. “There are millions of women in the United States who have had abortions. Some of you are here.”

“Medical students and residents are taught that abortion is a normal part of women’s health care,” she added. “The pro-life view is discouraged.”

Just one day before the march, the Senate failed to pass the “No Taxpayer Funding for Abortion Act,” despite the Republican Party’s four-vote edge in the chamber, on a vote of 48-47. Five Republicans didn’t cast a vote on Jan. 17; their spokespeople told The Epoch Times that for various reasons, the lawmakers were unable to be there to vote in support of the measure.

The bill was to make permanent the prohibition on the use of federal funds for abortion and was sponsored by Sen. Roger Wicker (R-Miss.).

As what looked like thousands gathered in front of the stage on the National Mall, live footage showed supporters with heavy winter gear, some holding up brightly colored protest signs. The crowd was filled with both men and women, young and old alike.

Slogans on signs ranged from “Women’s rights begin in the womb,” to “I am the pro-life generation.” One sign read, “Choose love, Choose life,” and another read, “Defund Planned Parenthood.”

Cindy Falce, a resident of Pennsylvania, said she has been coming to the event since 1993, having only missed it three times since then.

“When I come and march, I feel like I am doing something toward that cause, to answer to God that I have done a little tiny part to be against the slaughter of unborn babies,” she said.

Others who attended argued that science is embedded in their anti-abortion stance.

“I would say the scientific evidence is really clear. That baby, when conceived, is a human,” said Bill Harkins, from Mobile, Alabama. “Again, science is showing that.”

Harkins, a deacon in the Roman Catholic Church, said the facts show that a fetus is a human life and “we don’t want to take human life.” This year was his fourth time attending the march.

In 2016, the president wrote that he was pro-life before admitting that he didn’t always hold that position. He said he changed his mind after a “significant personal experience” brought the gift of life into perspective for him.

“I think they’re [Pence and Trump] doing well,” said Bobby Tull, of St. Louis. “It seems like we’re headed in the right direction with the Trump-Pence administration.”

Paul Masek, also a resident of St. Louis and a member of the Generation Life program of the Archdiocese of St. Louis, echoed those sentiments.

“They’re supportive of specifically the pro-life issues, in terms of being anti-abortion,” he said.