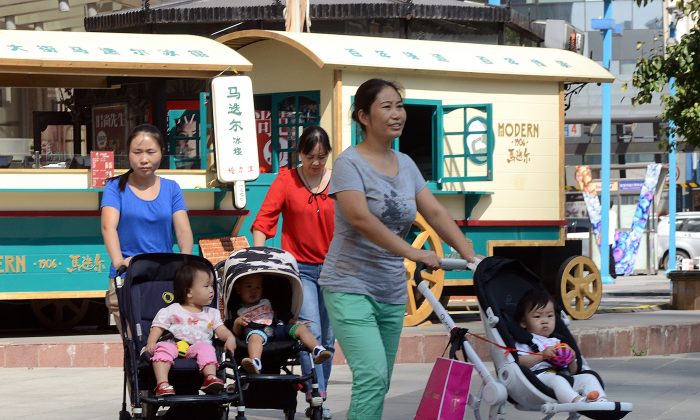 A group of Chinese women take their babies for a stroll outside a shopping mall in Beijing on Oct. 18, 2014. China’s sex ratio at birth in 2014 was 115.88 boys to 100 girls, highest in the world, according to state-run media Xinhua. (Goh Chai Hin/AFP/Getty Images)
China

Although last year’s census data recently released by Chinese authorities continues a six-year-long trend of improvement in the nation’s gender gap, China’s male-female sex ratio at birth was the most imbalanced of any country worldwide.

On Feb. 3, China’s National Health and Family Planning Commission published data recording 115.9 boys born for every 100 girls in the year 2014, according to state-run media Xinhua. The gap between male and female children born has been closing since 2009.

In 2014, the global sex ratio at birth was about at 107 boys to 100 girls, according to estimates produced by the Central Intelligence Agency. Between 103 to 107 boys born for every 100 girls is considered a balanced sex ratio.

Chinese gender demographics started to deviate from normal levels starting in 1982, when the sex ratio at birth was 108.47 boys to 100 girls, according to the online edition of Southern Metropolis Daily.

In 1979, China implemented the “One Child Policy,” which has been widely considered as the culprit behind the gender gap, as parents prefer to abort or abandon baby girls in favor of sons. Other experts theorized that the gap was caused by families concealing female births so that they could have another child in hopes of a son, the report says.

In 1979, China implemented the “One Child Policy,” which has been widely considered as the culprit behind the gender gap

Based on data from the National Health and Family Planning Commission, the Chinese population has had over 30 million “extra” male children born in the past 34 years, the Southern Metropolis Daily reported.

The imbalanced sex ratio has led to a series of social problems and criminal activities, among them human trafficking. Women, particularly from North Korea and countries in Southeast Asia are abducted or coerced into becoming for-sale brides that fetch high prices among Chinese bachelors.

In an effort to prevent parents from aborting baby girls, Chinese authorities ban sex identification for the unborn. Last year, police arrested four suspects in the city of Xiamen for identifying the gender of fetuses, according to Southern Metropolis Daily. Using a portable ultrasound machine, the four men would drive around town looking for pregnant women to offer sex identification services. They would charge hundreds of yuan if the baby was found to be a boy, and introduce the woman to a hospital for abortion if it was a girl, at no charge.

The suspects confessed that they tested for over 80 pregnant women, and eight of them went for abortions after they were found to be pregnant with girls, the report says.

Another group, also discovered last year, arranged blood samples for pregnant women, whereupon the samples were sent to Hong Kong for testing to determine the gender of the fetuses, where legal restrictions associated with the One-Child Policy do not apply. According to the Southern Metropolis Daily report, over 300 pregnant women sought out the underground business via social media to learn the sex of their babies, with each paying 5800 to 7500 yuan (US$930 to US$1200).