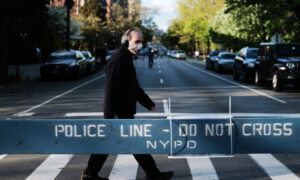 We 'Stay Safe' and Dissolve Our Firmer Virtues
0 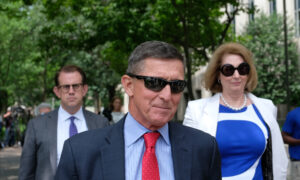 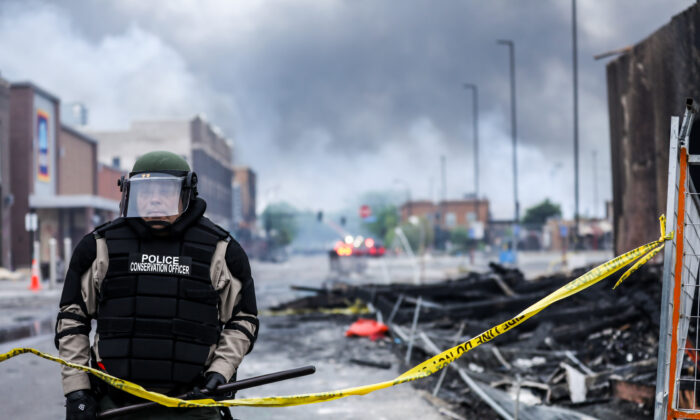 A police officer stands amid smoke and debris as buildings continue to burn in the aftermath of a night of protests and violence following the death of George Floyd, in Minneapolis, Minn., on May 29, 2020. (Charlotte Cuthbertson/The Epoch Times)
Viewpoints

Those Burning Our Cities Aim to Destroy Our Civilization

The first thing to understand about the destructive mob riots sweeping the country is that they aren’t race riots. The death of George Floyd in Minneapolis on May 25 while being arrested by the police is merely the pretext for the violence. The cause is hatred.

Hatred of America, first of all, but ultimately hatred of civilized order itself.

But no—that is not quite right. To speak of a battle between two things implies that there are two active sides. That is not, not yet, the case with the tsunami of destruction and murder we are watching on nightly television. Rather, what we are witnessing is an assault by the forces of barbarism on a supine establishment that has been pretending to represent the authority of civilization.

It is curious that the most egregious scenes of violence are taking place in blue states in cities run by left-wing mayors. Many of the mayors and chiefs of police are themselves black. In many locales, the police have been told to stand down as the mob rampages. The mayor of Minneapolis blamed “white supremacists” and “outsiders” for the violence.

Unfortunately for that assertion, there are no white supremacists to be found, only members of Antifa, Black Lives Matter, and kindred groups. An analysis of the ZIP codes of those arrested shows that they are overwhelmingly from the Minneapolis area.

Meanwhile, various celebrities are encouraging lawlessness by cheering on the malefactors, publicly promising to post bail for them.

Justin Timberlake, to take but one example, encouraged his fans to join him “in supporting the Minneapolis protestors” by donating to a “freedom fund” to combat “the harms of incarceration.”

What about the “harms” of destroying other people’s property or bashing in their heads with a skateboard? Ultimately, as Calvin Coolidge observed, “property rights and personal rights are the same thing.”

I should say a word about The Narrative. The official line is that police officer (now ex-police officer) Derek Chauvin killed George Floyd by kneeling on his neck for nearly nine minutes and asphyxiating him. The whole horrible incident was captured on video—Floyd can be heard piteously saying “I can’t breathe, I can’t breathe”—so it’s an open and shut case.

Except that there is a wrinkle. The preliminary autopsy report revealed “no physical findings that support a diagnosis of traumatic asphyxia or strangulation.” The report went on to note that “Mr. Floyd had underlying health conditions including coronary artery disease and hypertensive heart disease. The combined effects of Mr. Floyd being restrained by the police, his underlying health conditions and any potential intoxicants in his system likely contributed to his death.”

On June 2, CBS reported that an additional examination—it isn’t clear that it was an actual autopsy—concluded that Floyd died by homicide, with the cause of death mechanical asphyxiation, contradicting the medical examiner.

A skeptical analysis by a law enforcement publication claims that Floyd had methamphetamine and fentanyl in his system and that he may have been exhibiting signs of “excited delirium.” This report also claims that Chauvin’s neck restraint was consistent with Minneapolis department policy and “the best practice according to multiple scientific journals.” That violates the narrative, I know, but it is certainly true that “this case is not as simple as everyone would want you to believe.”

This doesn’t necessarily exonerate Derek Chauvin. It does, as Andrew McCarthy notes in a thoughtful column about the legalities of the case, show that here, as is so often the case, things are more complicated than they may first appear.

What is not complicated is the snarling criminality of those smashing storefronts, setting fire to cars and police stations, and sending innocent passersby to the hospital or the morgue.

There is some macabre irony in the fact that while most of the country is “locked down” by the diktats of the health police, enforced by power-mad governors and those aspiring to power in city councils and mayors’ offices throughout the country, abetted by virtue-signaling sheep who scream at their neighbors if they get within six feet of them or appear in public without a mask, thousands of vicious criminals are given leave to loot and burn and pillage. The rules about “social distancing” are suspended so long as people are bent not upon making their living but destroying the livings of others.

President Donald Trump has responded vigorously by calling out the National Guard. We must all hope that they will soon restore order. But the glimpses of viciousness broadcast across the country can’t be unseen.

In a magnificent monologue on his television show, Tucker Carlson peeled back the headlines to expose the festering reality that has brought us to this pass.

“The ideologues will tell you,” he noted, “that the problem is race relations, or capitalism, or police brutality, or global warming. But only on the surface. The real cause is deeper than that and it’s far darker. What you’re watching is the ancient battle between those who have a stake in society, and would like to preserve it, and those who don’t, and seek to destroy it.” That’s exactly right.

Writing in the dark days of 1939, Evelyn Waugh noted that “barbarism is never finally defeated; given propitious circumstances, men and women who seem quite orderly will commit every conceivable atrocity.”

Many if not most of the violent hooligans defacing our cities today are young beneficiaries of the richest and most generous society the world has ever seen. At school, they were taught to despise their country as racist, sexist, colonialist, and exploitative, attitudes that were reinforced in college and from the megaphones of the media, Hollywood, and our elite universities. How thin is the line between civilization and violent anarchy!

“The more elaborate the society, the more vulnerable it is to attack, and the more complete its collapse in case of defeat.”

We got a taste of that vulnerability when we indulged in a strange cult-like exercise of society-wide self-asphyxiation over a novel respiratory bug. Now we seem bent on trying self-immolation instead.

“At a time like the present,” Waugh warned, society is “notably precarious. If it falls we shall see not merely the dissolution of a few joint-stock corporations, but of the spiritual and material achievements of our history.”

I think that is worth keeping in mind as we watch CNN and MSNBC cheer on the “protestors” who are determined to destroy us.