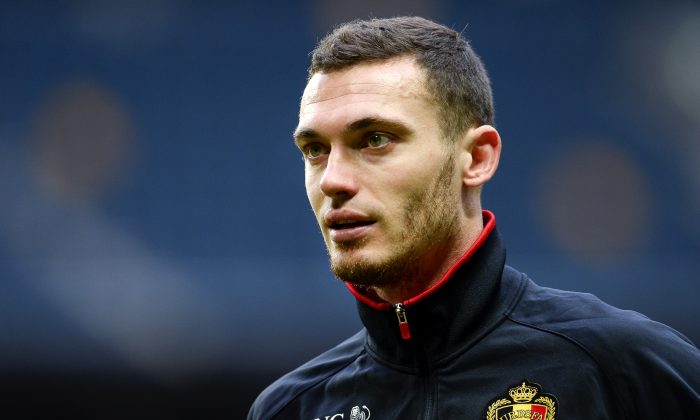 Belgium's defender Thomas Vermaelen attends a training session at Friends Arena in Solna, near Stockholm on May 31, 2014 on the eve of the friendly match Sweden vs Belgium. (JONATHAN NACKSTRAND/AFP/Getty Images)
Sports

Who is Thomas Vermaelen dating?

The 28-year-old Arsenal and Belgium defender is said to be dating Polly Parson, according to SoccerRise.com.

In ’86 it Was Maradona, Now Messi Faces Belgium

BRASILIA, Brazil (AP) — Belgium coach Marc Wilmots is old enough to remember Diego Maradona dumbfounding four defenders and a goalie to stop the nation’s incredible run at the 1986 World Cup in the semifinals. What Maradona was to Argentina then, Lionel Messi is now.

Wilmots called Maradona “the player that struck us down and gave us bad memories. Fortunately, that is well in the past now.”

Messi wants to bring those memories back when Belgium plays Argentina in the quarterfinals on Saturday.

And Belgium knows he’s more than capable to score a similar goal to the one that knocked the team out in 1986, when Maradona took on four players, ran past them and rifled the ball past helpless goalkeeper Jean-Marie Pfaff.

At the time, Belgium was already over the moon to have made it that far. This time, the team thinks it’s far from done, Wilmots said.

“You should only think of one thing: make the final. That Belgium didn’t use to have that frame of mind is not my problem,” he said.

Belgium’s strong defense has been the key to its World Cup run so far, with Vincent Kompany, Daniel Van Buyten and Jan Vertonghen all among the team’s standout players.

Together, they should be able to deal with Messi, they said.

“If he gets past one player, he will have to get past a second player, because another will help out,” Van Buyten said. “We will have to show our big heart.”

Pfaff was the tournament’s standout goalie in 1986. Now Belgium has Thibaut Courtois, who has kept Messi scoreless the last seven times they faced each other in Spain.

Courtois has already had a spectacular season, winning the Spanish league title with Atletico Madrid and getting his team into the Champions League final against city rival Real Madrid.

The only goal he conceded in the group stage was a penalty, and he made a decisive save late in the second-round game against the United States.

Assessing the 22-year-old goalie, Wilmots said that “Thibaut has done extraordinary things, certainly for his age.”

He is unbeaten for Belgium so far.

In all, it means that Belgium will have several ways of stopping Messi, who has four goals so far in the tournament. And the collective is often stronger than the individual, Wilmots said.