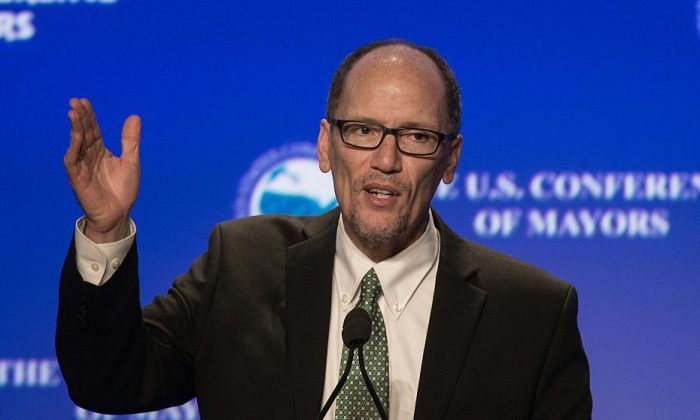 Formerly heading the Justice Department’s Civil Right Division, Perez promised to refocus the party on local organizing and state races. A lack of support on the local level, he believed, caused the Democrats to lose almost 1,000 legislature seats across the country over the last decade, in addition to losing the presidency.

“We lost in states like Michigan because we weren’t talking to people. You can’t show up at a church every 4th of October and call that organizing,” Perez told TV One’s Roland Martin two weeks before the DNC election.

He also wants to convince working class Americans that the Democratic party cares about job creation. He didn’t elaborate on how would the party get the point across, but recognized that the jobs message gave President Donald Trump the upper hand during the election. “What voters heard was, ‘he feels our pain.’ What they heard from us was, ‘vote for us cause he’s crazy’ … that’s not a message.”

A number of commentators expressed doubt regarding Perez’s sincerity about breaking the status quo at DNC.

DNC members have been complaining that too little money trickles down from the DNC to local branches, and is instead sucked up by large consulting and advertising contracts on the central level, reported Nomiki Konst, Democratic political activist and a reporter with progressive Youtube channel The Young Turks.

Over the past two years, the Clinton campaign and the DNC allocated almost $1 billion to eight major consulting firms, Konst found.

After allegations of collusion between the DNC and the Hillary Clinton campaign against her primary contender Sen. Bernie Sanders, the DNC established the Unity Reform Commission in July 2016 to propose reform of the DNC.

But the commission is chaired by Jennifer O’Malley Dillon, a partner at Precision Strategies, a consultancy that received almost $1.2 million from DNC and the Clinton campaign, according to Konst.

Over a dozen DNC members told Konst that O’Malley Dillon called them before the DNC election vouching for Perez.

When Konst asked Perez whether he will address possible conflicts of interest, such as that of O’Malley Dillon, he would not say. “There’s going to be a lot of different perspectives [in the commission] that are put to bear. That’s exactly what we want,” he said.

Perez won 235 votes on Saturday out of 435 and thus beat the 200 votes for the runner-up Rep. Keith Ellison (D-Minn.). Ellison was endorsed by Sen. Bernie Sanders, while Perez had the support of Obama and Hillary Clinton. Perez named Ellison the deputy chair, a position with little authority—a bone thrown to the Bernie camp, according to progressive commentator Mike Figueredo.