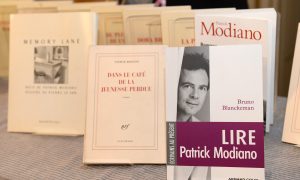 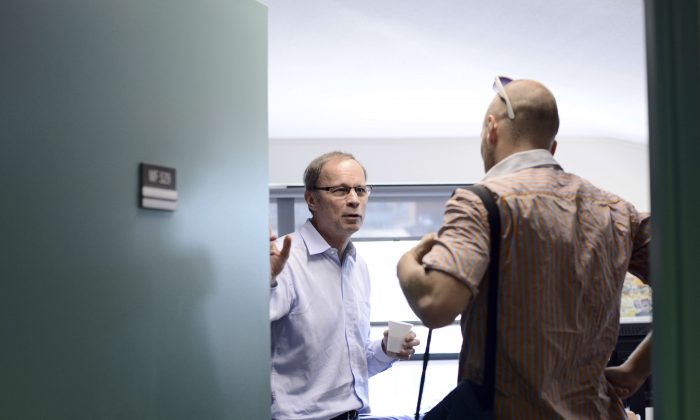 Laureate of the 2014 Nobel Memorial Prize in Economic Sciences, French economist Jean Tirole (C), in his office at the Toulouse School of Economics on Oct. 13, 2014. Tirole is a master of game theory and industrial organization. (Remy Gabalda/AFP/Getty Images)
Opinion

It’s that time of year again—when academic economics, thanks to the Nobel Prize announcements, is thrust into the public gaze.

That the economics Nobel is mistitled and has quite a different status to the other Nobel Prizes is neither here nor there (the proper and rather unwieldy title of the economics Nobel is the Sveriges Riksbank Prize in Economic Sciences in Memory of Alfred Nobel). The award of the 2014 prize, in the eyes of the academic economics profession and the wider public, still confers great kudos and status.

This year there is just one winner, Jean Tirole. The French economist has earned his reputation and the prize for his work on industrial organization, which uses ideas from contract theory as well as game theory to further research in this branch of economics. His work is technical and based around the development of formal models.

Building from these models, Tirole has tackled different policy questions including those relating to the regulation of large firms or monopolists. The entry into the policy realm has come about despite—rather than because of—the theory and method to which Tirole adheres, a theory and method that is highly abstract and captures reality largely as an afterthought.

An Intellectual and Ideological Rut

Academic economics is still stuck in an intellectual and ideological rut. Despite the global financial crisis—the worst in a lifetime—academic economists are more likely to win awards and the respect of their peers by producing abstruse models than by tackling and resolving real-world problems.

The economics Nobel awards advances in economic analysis—meaning the development of formal models and the application of particular mathematical and statistical techniques. In essence, solving puzzles within economics matters more than dealing with grand societal challenges.

Thomas Piketty, who has done more than anyone else in the last year to bring academic economics to public attention, had no real prospect of winning the prize, given his concern with the real-world issue of inequality. The non-award of the prize to Tony Atkinson—pioneer of inequality and poverty studies—can also be explained in the same way. But it should be a cause of concern, not least for members of the public tuning in to learn who has won the economics Nobel, that acute economic and social issues are not high on the agenda of academic economics.

My second reflection is that academic economics is still all of a type—it stands for some variant of neoclassical economics. Cosmetic differences aside, research in academic economics applies concepts and methods found in this narrow school of thought.

It has dominated economic thinking since the late 19th century and has marginalized all challengers. The award of the economics Nobel is, in fact, an award for conformity to neoclassical economics. Other schools of economic thought do not get a look in.

And this is in spite of the fact that neoclassical economic thinking failed to foresee the global financial crisis and advocates the kind of austerity policies that prevent recovery. It is alternative thinking—whether from Keynesian, Marxian, or ecological economics—that can help us to understand how to build a fairer and more equal economy.

A prize for thinking differently and building a better economics would be a great thing, but sadly it is not one that is awarded by the committee of the economics Nobel. Indeed, given the acute problems that exist in academic economics, it may even be time to call an end to the economics Nobel. The world certainly would not be a worse place without it.

David Spencer is a professor of economics and political economy at University of Leeds. This article previously published at The Conversation.