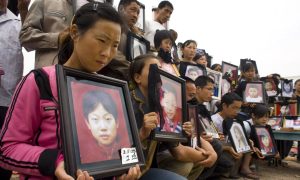 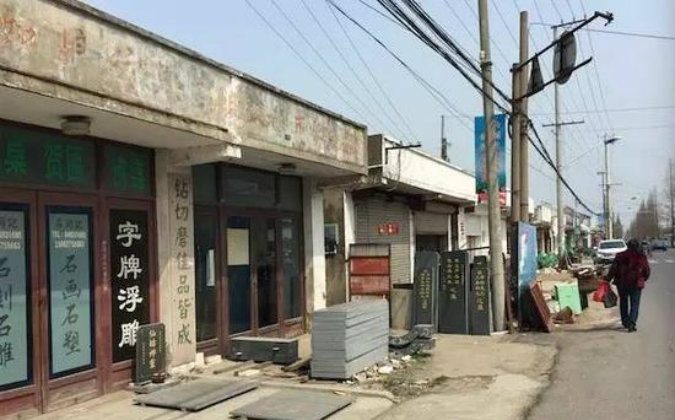 Scene from Rudong with one shop selling tombstones. (Sina)
China

In the 1980s, the county of Rudong in China’s coastal province of Jiangsu was lauded for its strict adherence to China’s infamous one child policy. Three decades later, the county’s residents are paying the price of the Chinese regime’s efforts at population control.

Rudong County has come under scrutiny recently for having negative population growth for 17 straight years, and for having a rapidly aging populace, according to a report by the semi-official Beijing News on March 29. And the county’s residents haven’t taken to recently instituted pronatalist measures.

Meanwhile, the buildings of many closed schools have been reappropriated for senior homes. For instance, Binshan Senior Apartments, the largest senior home in Rudong, was formerly Gangnan Elementary School, which wound down in 2012. There are currently more than 20 senior homes in Rudong.

Senior workers are a common sight in Rudong. The 20-odd tricycle drivers plying a busy commercial street in town are all above 60 years old. Workers in their fifties are hailed as “young people” at a construction site in Fengli Town.

Rudong’s skewed population was the result of having been the testing ground for the regime’s population control measures. In the 1950s, women in the county were having 5 children on average. Anti-birth controls were introduced in 1963, and twenty years later, over 99.5 percent of couples in Rudong had only one child.

In 1986, the Chinese regime’s State Council honored Rudong by declaring the county a “Family Planning Red Unit” and presenting a gold medal to the local government. The local government even erected a monument to commemorate the accomplishment.

Pan added that his wife had an abortion four months into her pregnancy to comply with the nationwide one-child policy in the 1980s, a decision he “couldn’t afford to regret” if he wanted to keep his Party membership and political appointment.

On March 28, 2014, Jiangsu Province implemented a so-called “two-child policy” after couples who were themselves single child were allowed to have a second baby in some parts of China. Officials at Rudong sprung into action, and hung up banners like: “Encouraging Qualified Couple to Have Two Children So That the Population at Rudong Can Have Long-Term Balanced Development.” The monument commemorating the county’s antinatalist achievements was quietly removed.

Two years later, the reception to birth control relaxation was far less enthusiastic than what officials had expected—less than 1 percent of the families in Rudong had applied to have a second child.

Pan, the former top Rudong official, has a theory as to why the county’s residents can’t make the transition to a two-child China: “Having children follows the law of nature,” he said in an interview with Beijing News. “For two generations, people have become accustomed to the idea of having only one child, and this trend cannot be easily reversed. Even though the policy has been suddenly relaxed, it is difficult for people to overcome the image of a nuclear family with only three members.”

On China’s popular microblogging site Sina Weibo, netizens were bitter at the intrusive family-planning policies and their legacy, as well as the family-planning honor that was bestowed upon the county 30 years ago.

“The monument you enshrined is stained with the blood of many deaths. You can erect a monument and remove the monument, but can you remove the resentment in people’s hearts,” wrote netizen “Carbonizing” from Shaanxi.

“It is not a question of whether we want to have a second child. But why the state has the right to interfere in our decision to have children, and how many,” wrote “Qin Ke Qin Ke” from Hebei.

“Torn Down Berlin Wall” from Shaanxi asked: “Who should be responsible for this erroneous national policy?”