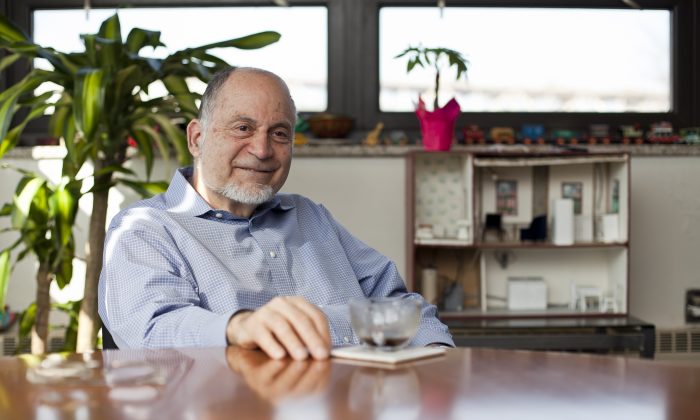 This is New York: Richard Cherry, Engrossed in Solving Problems

NEW YORK—When they were kids, Richard Cherry and his best friend used to dream of becoming lawyers. They would sit on the steps of his friend’s house in east Brooklyn and try to find simple solutions to complicated problems.

Little did Cherry know at the time that one day he would work for the Pentagon, and then stumble upon urban environmental sustainability before it became a mainstream concern.

Although Cherry, 70, graduated with a philosophy degree from Cornell and a law degree from the University of Pennsylvania, his first job was as a foreign policy analyst at the Pentagon.

In the 1960s, during the Cold War, Defense Secretary Robert McNamara was looking for fresh ideas. “I was hired as a new mind that had never done anything with foreign policy, to come and think bright thoughts about foreign policy,” Cherry said.

During two years at the Pentagon, Cherry’s work varied from helping to curb nuclear proliferation to planning who the ambassador should have dinner with in Britain.

“Before I left, they drained everything out of my brain,” he said, adding that overall Washington had been a frustrating experience.

“Sometimes just being bright isn’t good enough. People were very resistant to me,” he said.

After leaving foreign policy, Cherry worked for the U.S. Court of Appeals, before getting hired as a lawyer for a major Wall Street firm.

“I loved solving problems. Somewhere as a kid I must have got the idea that law was the way to [solve problems]. But as I found out, law mainly consists of drafting papers,” he said.

“You don’t work that much with people. You work with corporations,” he said. “That is one of the things that was missing in law practice.”

“Other lawyers there got very excited about working in a multimillion-dollar building, even though we were just drafting papers,” he said. “That was not exciting for me.”

One day at the office, the Urban Affairs Coalition (UAC) came in asking for discounted assistance with some legal issues, and Cherry’s firm assigned him to take on the work. Initially, he thought that it would be temporary, and that he would return to his previous work in two years’ time.

“As you can see, I still haven’t found my way back yet,” Cherry said.

Cherry spent over 20 years at the UAC, “doing things the city had never done before.” He works with community groups, creating affordable housing for the needy.

“Government used to not fund rehabilitation housing, only new developments,” he said. “I led the way in getting [the need for] the rehabilitation of housing understood.”

“Where there is a will, there is a way. You can make it happen even if it’s never been done before,” he said. “But you need to understand that fate can change plans, and you need to be responsive.”

Due to a chain of events, the UAC board of directors decided to dissolve the coalition at a time when Cherry was the acting president.

“I was 50 years old then and trying to figure out what to do next with my life,” he said.

Starting Over at Age 50

Cherry got involved in environmental work at first more to have a job than out of interest.

“I just needed a job,” he joked. As it turned out, the job was exactly the way to solve more problems.

In 1994, Cherry founded the Community Environmental Center (CEC), a nonprofit that focuses on urban environmental issues. Cherry was in his early 50s at the time.

“It was scary. It was really starting over with things I had never done before,” he said. “I wasn’t sure whether it would last or whether we could be successful, but a brave group of 18 people came with me from the coalition.”

For the first five years, prior to receiving government funding, it was very difficult to accomplish any initiatives at the CEC, he said.

Twenty years ago, caring about the environment used to mean dealing with a forest or a jungle, Cherry said. “I became environmental about New York at a time when no one thought of urban nature.”

“We were one of the first organizations to focus on environmental issues in the city,” he said.

After about five years, the government began to recognize CEC’s work and provide funding. In 2009, CEC installed the first energy-efficient solar hot water systems in multifamily buildings in Brooklyn.

“I heard them say it gave them hope. … That’s the most exciting thing to see,” he said.

The CEC has not only received the 2013 Environmental Quality Award, but has also made it onto Crain’s 50 Best Places to Work in NYC in 2010.

“I think I’ve proven here that one can be caring about people and still be successful,” he said.

“I grew up in a time when there was peace—people weren’t fighting everywhere in the world, and there was lots of hope,” Cherry added.

“As young people, we grew up feeling that if we did our homework and we were good people, we would succeed,” Cherry said. “We didn’t have to worry about anything else.”

“I really wish things could turn around so that people who are starting out now can feel that help that I grew up with.”