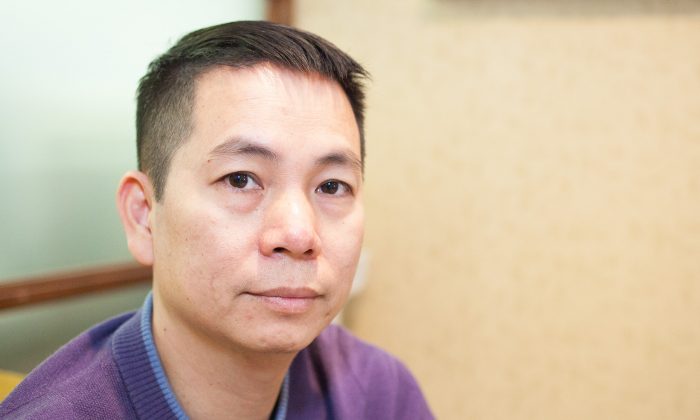 This Is New York: Luo Zizhao, the Master Chef Who Went on Hunger Strike

NEW YORK—The wire that connected the Christmas lights that Luo Zizhao was assembling would slice against his fingers; it would slice through the wounds that were already leaking pus, causing a rivulet of dark red blood to drip from his fingers.

For a whole month, Luo was only allowed to sleep between 2 and 5 in the morning. The rest of the time, he assembled plastic flowers, hairpins, and ominous Christmas lights. He was a prisoner of conscience working in a Chinese labor camp.

At that labor camp in Canton, 80 men with bleeding fingers slept on their sides in a 50 square foot space; if they wanted to turn over, they had to stand up first. Amid a mass of thieves, drug dealers, and murderers, Luo was the only one convicted for a spiritual belief.

More than a decade later, Luo, 46, shows no physical or emotional signs of the years of torture he endured in Chinese prisons. Although macabre memories return from time to time, he always holds himself with a genteel and reserved dignity.

He is currently the executive chef of Radiance, a high-end Cantonese restaurant in New York City. Luo is the master chef who invented Chinese culinary techniques that customized dishes to suit customers based on their age, gender, and hometown.

But he is a master chef who believes that without freedom of belief and freedom of speech, food is not worth eating. This is the story of a hunger strike of a chef.

Lows of a High Life

Luo was executive chef at Kai Kong, one of the most illustrious hotels in Beijing.

Food suppliers sought after Luo like fish seeking water. People constantly offered him bribes, and he constantly accepted them.

He had money. He had women. He had a wife, but he didn’t care. Or at least that was what he told himself.

Deep in the recesses of his mind he felt a tinge of guilt, a guilt that he could never completely ignore.

He met and fell in love with Wang Jing in 1989, when she started off as a waitress at Kai Kong. Their first date was at a Kentucky Fried Chicken, which like all American fast-food restaurants was wildly popular in China at the time. Seven years later they married.

Wang was a beautiful-looking woman with a scourging temper. In 1998 she took up Falun Gong, a spiritual meditation practice, and became uncharacteristically thoughtful and gentle.

He did not know what to make of it, so in an attempt to understand, he began practicing the following January.

Falun Gong is centered on the traditional Chinese principles of truth, compassion, and tolerance—principles that shifted Luo’s outlook on life.

“My whole life, I have never felt that I was truly living for myself because I wasn’t living the life of the person I wanted to be,” he said. “Falun Gong had that empowering effect for me.”

He broke things off with his mistresses and began to reject bribes. It was his and Wang’s second chance for a happy marriage, to finally be with each other with integrity.

For years, they had fought with putrid bitterness. There were two occasions when they had seriously considered getting divorced.

But when she took up Falun Gong, she was willing to admit to wrong, and willing to change. And so did he.

Their relationship did not align in perfect harmony, as few things do in life, but the fact that they expressed a genuine interest in self-improvement was a wondrous rarity for them; it saved their marriage.

Soon Falun Gong became popular in China, with about 100 million people practicing it—too popular for the likings of the Chinese leadership. In July 1999, the Chinese Communist Party outlawed the practice, considering it a core threat to its power.

Luo can still hear that first knock on the door, the thud, and another one, before the police charged into their Beijing home at 2 a.m. in December 1999.

He and his wife, as well as 20 other Falun Gong practitioners in Beijing, were arrested that night. It was a warning for what was to come if they did not obey the government. He and his wife were let out the next day.

But Luo refused to give up. Inner peace is not something to be given up.

In October 2000, he and his sister decided to protest the ban at Tiananmen Square. He traveled by train from Canton, the southern edge of China, to Beijing. The train ride lasted two nights and a day. The long hours were spent with legs shaking from trepidation.

But the feeling he had when he opened his yellow banner reading “Falun Buddha Law” in the middle of Tiananmen Square was sublime. It was a moment that he would continue to treasure—a moment when he stood for something more than himself, for the rights of humanity.

Two minutes later he was hit by a hard blow.

Six plainclothes policemen pushed them into a van. No words were said. They took turns slapping his face.

“What is the reasoning behind my arrest? Why is Falun Gong banned? Where is justice in this country?” Luo cried.

The officers remained silent and continued beating him. He and his sister were taken to a detention center near Tiananmen, where the guards threw them into a dungeon-like prison cell in a basement.

Luo was eventually transferred to the Sheng De detention center in Canton, where he was officially charged with criminal activity.

It was there that they stopped beating him and started forcing him to make Christmas lights instead.

He awoke to shrieking alarms every day at 2 a.m., when it was time to work. For those who took a little longer to get up, they were pulled aside and hung in horrifying, obscure positions.

He recalled seeing a man who was hung from his left arm and right leg, with only his left toe touching the ground to hold the balance of his weight. When the guards released him eight hours later, his left leg had swollen to an unrecognizable size.

It was there that Luo made the decision to go on a hunger strike to protest against the system. He stopped eating, but he kept working. As the days went by his vision blurred and his movements slowed.

On the fifth day, a young guard in his 20s pulled him aside. He said that he had children to feed, and that his job was on the line if Luo died. Out of a moment of compassion, Luo decided to end his strike.

In 2002, he was arrested for the third and final time.

He was taken to the Guang Dong San Sui labor camp. He was sentenced to two years, but they kept him there for 26 months.

The labor camp was in an unmarked, nameless building in the isolated district of San Sui. No one in the area knew what it was used for. Its walls were sound proofed. Screams went unheard.

The prisoners inside knew it was the last stop. It was known as the “center for people who refused to reform.”

Luo was forced to sit perfectly straight on a small stool from 4 a.m. to 10 p.m. everyday. He had to sit so straight that his lower back ached as if it were splitting apart. He sat in a pool of sweat and could feel his buttocks rotting. The punishment lasted for six months.

For the next punishment, he was fed to the mosquitoes.

Naked, he was forced to enter a room full of mosquitoes. In the beginning, he would try to wave the mosquitoes away but after a while his arms grew heavy. All he could do was try not to look at the insects’ stomachs as they expanded with blood.

There, he lost track of time as he held tightly to his sanity. There was no light in the windowless room. He could not tell if it was night or day or how many days and nights had passed.

The walls of the mosquito room were stained with copious smears of blood. It was too much blood to belong to the bodies of smashed mosquitoes. It was most likely the blood of people who tried to commit suicide.

Perhaps due to his connections to important people, Luo was released in 2004.

He decided to stay below the radar. In 2011, the first chance he got, he left Beijing with his wife and they came to New York.

The City of Life

“It took some time getting used to an environment where you have the freedom to live,” Luo said.

For some months he still feared that each knock on the door, and each ring of the telephone, could mean death. For two months, he would panic whenever he noticed an unknown Asian person walking behind him.

But he found a purpose to his life again in a particular cooking competition.

He won first place in NTD Television’s International Chinese Culinary Competition in New York that year. The competition’s mission statement is to revive the art of traditional Chinese cuisine.

“I felt that there was something very meaningful about taking part in that,” he said. “It helped me take my mind off of me and my experiences in China, it made me feel that I can still contribute to a greater good for the world.”

He is currently working on writing a book about his three decades of culinary experiences in China, and he feels there is a healing process in that.

But for the most part, he said he is able to cook at peace because he is living in a place where eating is worthwhile.