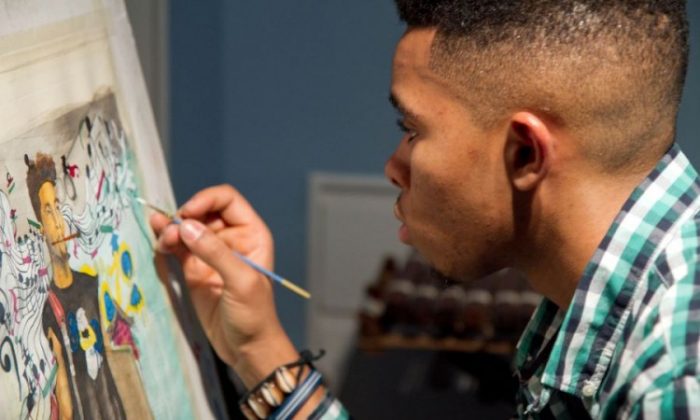 NEW YORK—Jean-Lemke Charlot II, 18, of Queens traveled to the White House during Black History Month to hang one of his paintings exploring his African roots.

Union Square takes on the feel of an African village in the painting, which stayed at the White House after Charlot’s D.C. adventure was over. It started as a challenge from Parsons New School of Design, where Charlot hopes to study when he graduates, to his high school. The challenge presented to the students at the High School of Art and Design was to take an ordinary object people overlook, and shine a new light on it, and from this, create three works of art.

Charlot chose the humble bucket. Charlot’s buckets transform New Yorkers into Africans, showing the cultural roots that stay with many African-Americans in the city. The women in his painting walk through Union Square in ethnic skirts and carry buckets on their head the way women would when getting grains or fruits in an African village.

In another of Charlot’s paintings, African-Americans drum on buckets in a New York City subway station.

“For centuries in Africa, drummers were messengers,” explains Charlot, messengers delivering prayers of thanks. As the urban drummers in his painting beat out their message on buckets, a zebra and rhinoceros walk out of a mural on the subway wall to meet them.

Although he did not get to meet the president, Charlot knows President Obama saw and appreciated his work, which is reward enough, he said.

Painting isn’t his only artistic medium for connecting with his heritage.

African drums of all sizes line the walls in the teen’s bedroom. He started an African drum team, Okechukwu, when he was 11. The team still plays together at community events, nursing homes, and other venues. Okechukwu is a Nigerian word that means “God’s gift.”

Charlot teaches autistic children to play the drums. His mother, Nicola, said he told her one day, “It’s the hardest thing I’ve ever had to do.”

In an interview with The Epoch Times when he was 13, Charlot expressed with a wisdom beyond his years how educational drumming is for him, “Drumming has uplifted my moral character by making me communicate with adults and by passing on the culture when I’m teaching children.”

Charlot’s mother is happy he keeps so busy—he also does African dancing and hip-hop dancing, acts in plays, and has learned other African instruments—and out of trouble, away from the wrong crowd.

“I can relate anything—from my music, to anything I experience in my neighborhood—through my artwork,” said Charlot. He prefers visual art because, “The visual arts are a clearer perspective for me. It allows me to express who I am in a clearer image.”

Charlot described some common scenes from his vivid imagination, “I might ride a bike over the Great Wall of China with my ancestors, or turn into a bird to fly into a different future I’ve created for myself.”

He wanted to be dentist for a long time, to follow in the footsteps of his uncle, whom he idolizes as an example of success. But when he had to choose his path in high school, he realized the sciences weren’t his passion.

He recalled a math test he took as a child during which he daydreamed about his uncle and filled the page with a detailed portrait instead of formulas and equations.

His mother enrolled him in art classes after that, and now he is grateful for the opportunity to refine his skills and techniques at the High School of Art and Design. With college around the corner, his mother says many good art and design schools have expressed an interest in the creative youth.