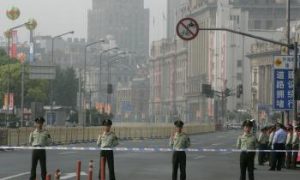 In Shanghai, Everyone Feels the Terror of the Olympics
0 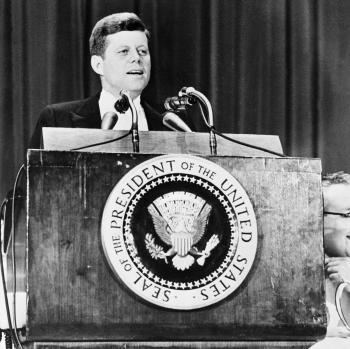 File Photo of Former President John F. Kennedy during a speech as he is invited by the American newspapers chairman association at the Waldorf Astoria hotel in New York city, April 27 1961. (Getty Images)
US

This Day in New York History On April 27…

By Tara MacIsaac
Print
1961 JFK Gives Speech at Waldorf Astoria: John F. Kennedy gave a speech from the Waldorf Astoria Hotel on April 27, 1961. The speech, titled, “The President and the Press ,” called on the media to use discretion when reporting on the nation’s defenses so as not to tip off the enemy.

What was most provocative about the speech, according to some theories, was its criticism of secret societies. While calling on the media to use its freedom of expression wisely, the president denounced secrecy and cover-ups in the government.

“The very word ‘secrecy’ is repugnant in a free and open society; and we are as a people inherently and historically opposed to secret societies, to secret oaths, and to secret proceedings,” said JFK. Some theorize that the speech may have incited his assassination.

1897 Ulysses S. Grant Memorial Dedicated: The only president buried in New York City, Ulysses Grant’s tomb stands at the intersection of Riverside Drive and West 122nd Street. Grant died in 1885, but the great granite monument was dedicated on April 27, 1897, on what would have been Grant’s 75th birthday. The neoclassical structure stands 150 feet tall and was made possible by 90,000 donors who raised a total of $600,000.

Then-Mayor John Lindsay supported Lennon and Ono, and wrote a letter to Commissioner of Naturalization and Immigration Service Raymond Farrell on their behalf. He told the commissioner that he believes “artists of their distinction [should] be granted residence status. They have personally told me of their love for New York City and that they wish to make it their home.”

Lindsay writes that if deportation proceedings were spurred by Lennon and Ono’s critical voices, it was a denial of the constitutional liberty of freedom of speech.

"The courts will not condone selective deportation based upon secret political grounds," wrote Judge Irving Kaufman in October 1975 after ruling against the deportation of the famous couple.