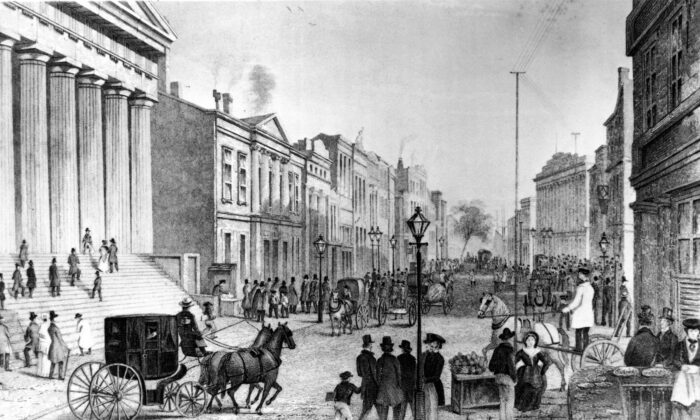 Engraving of a scene outside the New York Stock Exchange at the corner of Wall Street and Broad Street in downtown Manhattan, New York, in 1860s. (FPG/Getty Images)
Markets

This Day in Market History: The NYSE Is Born Under a Buttonwood

Each day, Benzinga takes a look back at a notable market-related moment that happened on this date.

On May 17, 1792, the signing of the Buttonwood Agreement laid the groundwork for the New York Stock Exchange.

Where Was the Market

What Else Was Going on in the World

The U.S. had recently created the postal service and passed the Presidential Succession Act. Across the Atlantic, the French Revolution raged.

Under the shade of a Wall Street buttonwood, 24 stockbrokers and merchants signed an agreement establishing a centralized securities exchange, obviating the roles of auctioneers and setting a commission rate.

Just five securities traded at the time, with the Bank of New York the first to debut.

Nearly 25 years later, the organization became the New York Stock & Exchange Board. After a series of mergers and acquisitions, the exchange is now operated by Intercontinental Exchange.