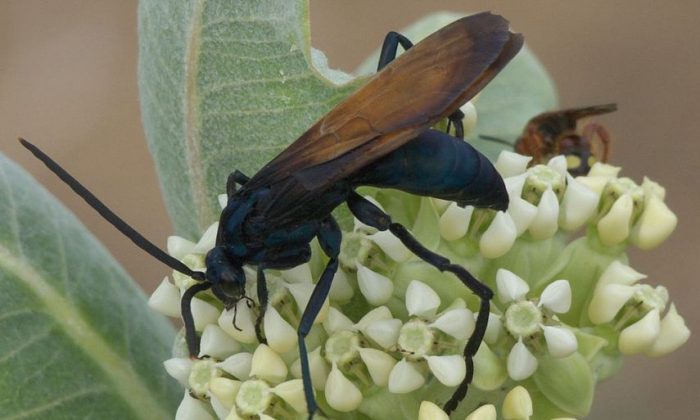 This Bug’s Sting Is so Bad, Experts Say You Should Just ‘Lie Down and Scream’

“Just lie down and scream.”

That’s the advice of a peer-reviewed journal if you’re bitten by the nefarious tarantula hawk.

The insect, specifically, is a spider wasp that hunts tarantulas, native to nearly every continent. They’ve been spotted as far north as Logan, Utah, in the U.S. and in Argentina.

Tarantula hawk females, the ones with the stinger, don’t sting often. But when they do, it’s said to be extremely painful.

“There are some vivid descriptions of people getting stung by these things,” said invertebrate biologist Ben Hutchins of the Texas Parks and Wildlife, “and their recommendation—and this was actually in a peer-reviewed journal—was to just lie down and start screaming, because few if any people could maintain verbal and physical coordination after getting stung by one of these things. You’re likely to just run off and hurt yourself. So just lie down and start yelling,” according to Wired Magazine.

In an Imgur post, one person described being stung by the insect.

“Within half a second of being stung, the pain begun, and I dropped straight to the ground and started screaming my head off (I wish I had been recording – it’d make a good Wasted gif, I bet). It was excruciating, all-encompassing – I lost the ability to think about anything else but the brutal, blinding pain wracking my body,” the person wrote.

“I honestly thought this thing had killed me. The pain lasted for about 5 minutes (though it felt like eternity), for the duration of which I did nothing but lie in the fetal position and scream/wail/moan,” they added.

Apparently, the bullet ant—native to South America—has the most painful sting of all insects. It’s named as such because being stung by one feels like being shot.