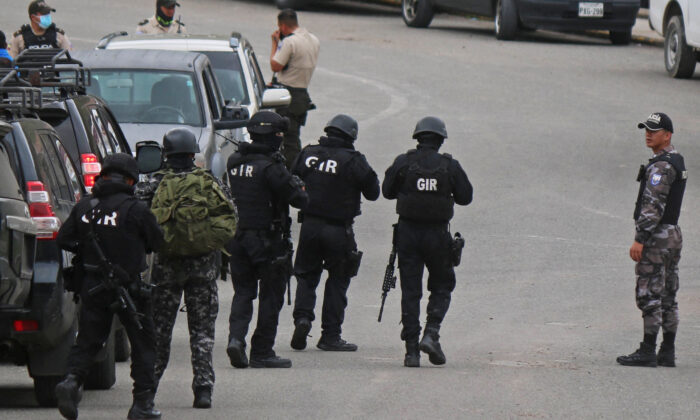 Soldiers and policemen outside the CRS Turi prison after a riot in Cuenca, Ecuador, on April 3, 2022. (Fernando Machado/AFP via Getty Images)
Americas

QUITO—Thirteen prisoners were killed at a prison in the Ecuadorean city of Santo Domingo on Monday, Ecuador’s prison agency said, the latest incident of deadly jail violence in the Andean country.

The government of President Guillermo Lasso attributes prison violence to fights between gangs over control of territory and drug trafficking routes.

The police and the armed forces were retaking control of the penitentiary, the SNAI prisons agency said on Twitter. It earlier called the incident a “dispute.”

“Unfortunately, personnel from the center report up to now that 13 prisoners are dead and two are injured,” the agency said, adding a final count will be carried out by the attorney general’s office.

Violence at the prison in Santo Domingo in May led to 43 deaths.