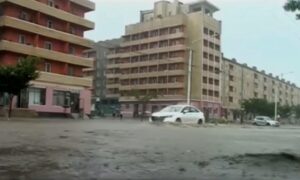 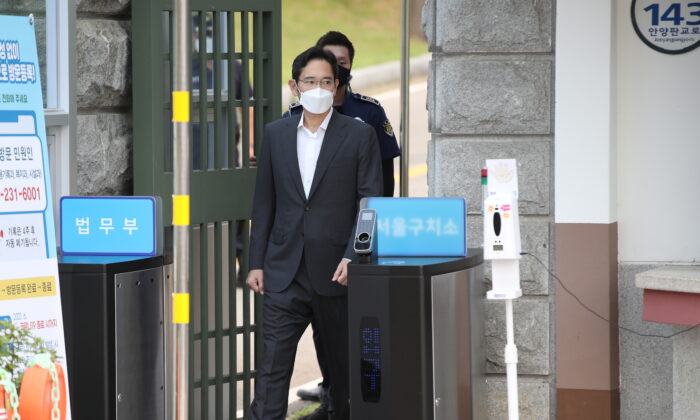 Thinner and Contrite, Samsung’s Leader Walks out of Jail on Parole

UIWANG, South Korea—Samsung Electronics Vice Chairman Jay Y. Lee, convicted of bribery and embezzlement, walked out of prison on parole on Friday, with South Korea’s president calling on the public for understanding over his controversial release.

Broad support for his parole grew amid anxiety that major strategic decisions are not being made at the world’s biggest memory chip and smartphone manufacturer without him. President Moon Jae-in’s office said the decision to release Lee was in the national interest.

But civic groups have slammed his parole as another sign of leniency for the country’s business elite and one that undermines its justice system.

Lee, 53, appeared outside the Seoul Detention Center, wearing a dark grey suit and looking much thinner than when he was last detained in January. Convicted of bribing a friend of former President Park Geun-hye, he served 18 months of a revised 30-month sentence.

“I’ve caused much concern for the people. I deeply apologize,” Lee told reporters. “I am listening to the concerns, criticisms, worries, and high expectations for me. I will work hard.”

He went straight to Samsung headquarters after his release.

South Koreans have long had an uneasy relationship with the founding families of the country’s chaebols, veering between anger over their many privileges and scandals, and recognition that the conglomerates are also responsible for much of the country’s economic success.

“We are well aware that there are supporting and opposing views on Vice Chairman Jay Y. Lee’s parole. The views of the people who are opposed are also right,” Moon’s office said in a statement.

“On the other hand, there have been many people who called for his parole in this severe crisis, hoping that he will help the country with respect to semiconductors and vaccines.”

Concerns have also increased that Samsung needs a steady hand at the helm to help it remain competitive in the chip sector amid a global shortage and at a time when rivals like TSMC and Intel Corp are making large investments.

One of the decisions Lee is expected to make is the final call on the location of a $17 billion U.S. plant that will produce advanced logic chips.

While Samsung has three CEOs in charge of its main divisions and its day-to-day operations have not been affected by Lee’s absence, company sources say major investment and M&A decisions should only be made by Lee.

Before he resumes work, however, Lee must gain separate justice ministry approval, though the decision is expected to be a formality.

In a symbolic move that appeared timed to coincide with his release, Samsung on Thursday made good on a promise by Lee with an announcement that it had signed its first agreements with four company labor unions which cover the provisions of offices and assurances that union activities will be allowed.

Lee initially served one year of a five-year sentence from August 2017 which was later suspended. That court decision was then overturned and while the sentence was shortened, he was sent back to jail in January this year.

His parole comes after the Justice Ministry last month eased eligibility guidelines for first-time offenders with good behavior like Lee to about 60 percent of sentence term served. The average eligible time for all criminals in South Korea was 80 percent prior to the easing.

Lee still has other legal woes to grapple with. He is also on trial accused of accounting fraud and stock price manipulation connected to a 2015 merger of two Samsung companies. The first hearing of a separate case, in which he has been accused of unlawfully using a sedative, is expected on Sep. 7.

Lee has denied the accusations in both cases.

By Dogyun Kim and Joyce Lee