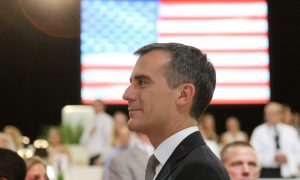 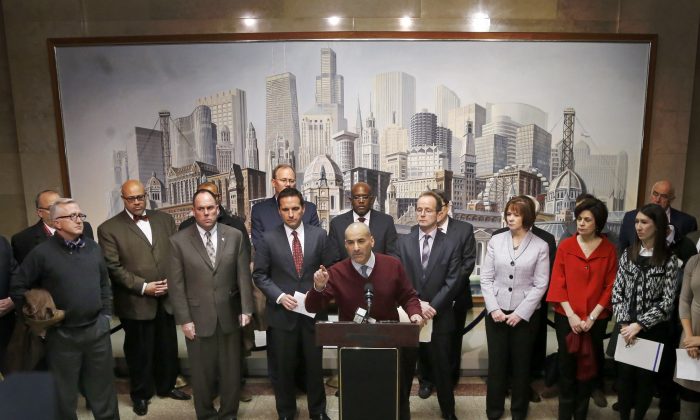 Sam Toia (C), president of the Illinois Restaurant Association, leads Aldermen, merchants, and business leaders in a news conference voicing opposition to a proposed increase of Chicago's minimum wage to $13 an hour Monday, Dec. 1, 2014, in Chicago. Chicago is set to become the latest US city to raise its minimum wage, as Mayor Rahm Emanuel fast-tracks a politically popular plan to reach $13 per hour amid his bid for a second term and criticism that he's out-of-touch with working people. (AP Photo/Charles Rex Arbogast)
Business

CHICAGO—Chicago’s minimum-wage workers will earn $13 an hour by 2019 under a plan the City Council approved overwhelmingly on Tuesday. Pushed by Mayor Rahm Emanuel, the change makes the nation’s third-largest city the latest to raise its rate. Still, opponents worry about the impact on business.

Here are some things to know about Chicago’s minimum wage hike.

The Chicago plan raises Illinois’ $8.25 rate — which is $1 higher than the federal rate — incrementally. It’ll get bumped to $10 next year, later increasing by steps of 50 cents and $1. City officials estimate more than 400,000 Chicago workers will benefit.

State legislators are now considering a plan that could raise Illinois’ rate over time to $11. What remains unclear is if there’s the political will to do so and how it would affect Chicago. Emanuel initially fast-tracked the plan over fears that legislators would pre-empt Chicago’s increase.

Five of Chicago’s 50 aldermen voted against the proposal. Two are small business owners, including Alderman Tom Tunney who runs Ann Sather restaurants. He fears companies might leave Chicago over the increased costs of doing business. Groups like the Chicagoland Chamber of Commerce, which oppose a hike, say a higher wage means disadvantages for city businesses.

Democratic Gov. Pat Quinn said he’ll push for a state-level increase during his less than two months left in office, but Republican Gov.-elect Bruce Rauner says he’ll support a hike only if it’s done in conjunction with other reforms. He urged Emanuel to keep Chicago’s competitiveness in mind. However, Emanuel disputed the notion of disadvantages, saying working families shouldn’t live in poverty.

Emanuel also addressed business group concerns of the legality of the move by saying Chicago has the authority to raise its own rate.

Chicago is the latest major city to give minimum wage employees a raise. This year, Seattle officials approved a phased-in $15 wage. In California, San Francisco voters approved a $15 in November, while Oakland OK’d an increase to $12.25. Portland, Maine, and Louisville are considering increases.