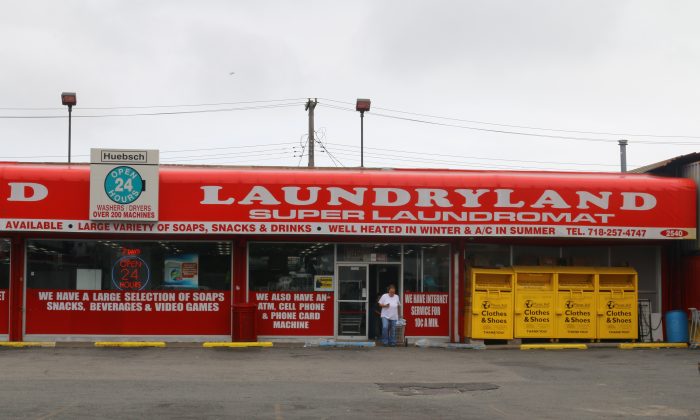 NEW YORK—”Always hear of something going on,” Isi Diaz said of the East New York neighborhood where his uncle and father’s laundromat operates.

Three men tried to rob Laundry Land on March 18. It was one of 12 laundromats hit in a spree of robberies and attempted robberies since January. Eleven of the robberies occurred in Brooklyn.

“About 3 a.m., three guys came in with masks and gloves,” Diaz said.

“They weren’t able to take anything,” Diaz said.

The two women present have not returned to the laundromat since the event.

Since the attempted robbery, the doors of Laundry Land no longer remain open overnight.

“Don’t let anyone in unless we know them.” Diaz said. “Police come by a couple times a night to check on us.”

Despite the heightened police presence in the area, Diaz still doubts the general safety of the neighborhood.

“Someone’s always getting shot or killed, especially back there in those projects,” Diaz said.

The most recent hit in the spree occurred near midnight on June 7 at the Express Laundry on Caton Avenue in Brooklyn. A surveillance video shows one unmasked suspect standing by the door as a look out.

According to police reports, in most cases, three suspects, including one armed with a gun, have entered businesses and taken money from the register and customers. There have been no reports of injuries.

“Young people don’t have nothing to do!” said Priscilla Mathews, a 20-year resident of the East New York who is worried about the safety of her foster daughter.

“They don’t have a future here,” said Mathews. “They want fast cash.”