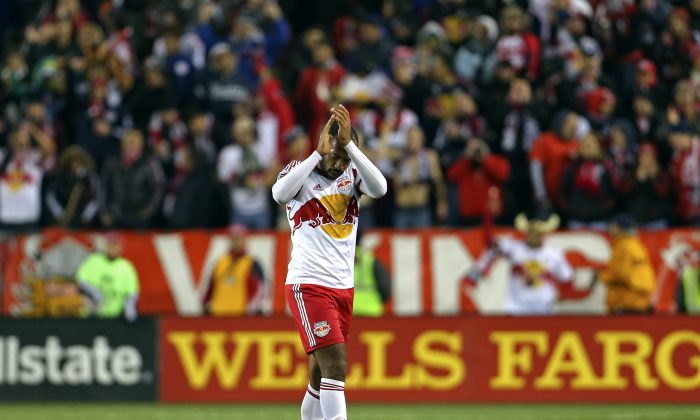 Thierry Henry of the New York Red Bulls acknowledges the crowd as he leaves the first game against the D.C. United on Nov. 2, 2014, in Harrison, N.J. (AP Photo/Adam Hunger)
Soccer

Thierry Henry created for yet another New York Red Bulls goal, helping his team advance to the MLS Eastern Conference final with a 3–2 aggregate win over D.C. United on Saturday at RFK Stadium.

The Red Bulls lost the second leg 2–1 after winning the first leg 2–0 at Red Bull Arena last Sunday. They will face either the New England Revolution or Columbus Crew in the Eastern final. New England won the first leg 4–2 in Columbus and is favored to advance on Sunday.

It’s the first time since 2008 the Red Bulls have reached the Eastern final and they did it against their nemesis D.C. United who was below par overall in the series.

New York essentially did more than enough to win on aggregate with a master-class performance in the first leg; they kept their belief in the second leg despite going a goal down and got the desired result.

Henry orchestrated all three of New York’s goals over the two games. His talent is not one that is often found in MLS and with the debate swirling over each game potentially being his last before retirement, every opportunity to see him play in MLS is one to treasure.

The game was fairly uneventful for the first half hour as D.C. United pushed hard for the opening goal and dominated possession, but didn’t come up with anything too threatening. The Red Bulls appeared happy to soak up the early pressure and rely on counterattacks.

For New York, one goal (an away goal) would always be a body blow for DCU as the home side would then need to win by three goals in regulation time. A 2–0 win for DCU in regulation time would force extra time and potentially a penalty shootout.

But the game took off in the 37th minute when midfielder Nick DeLeon got his head on a fine cross from left fullback Taylor Kemp, giving DCU the lead.

From that point on, the Red Bulls operated with more urgency and five minutes later Bradley Wright-Phillips worked his way in on the DCU goal, but Bill Hamid came up with a solid save in the one-on-one chance.

DCU was without their joint-leading scorer Luis Silva (11 goals). His presence would have helped greatly and was perhaps most noticeable in the first game when United’s attack looked meek. The first leg was arguably D.C. United’s worst performance after a terrific regular season.

The Red Bulls picked up the pace early in the second half in front of the sellout crowd of 20,187. They were clearly not content with sitting back anymore with the series finely balanced with dramatically different implications based on which team would score the next goal.

New York’s work paid off in the 57th minute when Wright-Phillips headed a ball to Henry on the left flank. Against Sean Franklin, Henry got the ball on to his left foot and sent in a cross to fellow Frenchman Peguy Luyindula who deflected it past Hamid for the equalizer.

At this point, New York knew they had more than likely done enough to advance as United would need to score three more goals in regulation time without conceding.

Henry spoke about how the Red Bulls remained confident after giving up the opening goal, despite being slightly displeased with how they started the game.

“We didn’t show the way we can play,” said Henry in an interview with NBC Sports. “We were not quite there in the first half. We were too deep. We knew we were in the driving seat.”

“We kept our shape, composure in the second half,” Henry continued.

“We knew if we scored before they do, it would be game over.”

D.C. United had to throw everything they had at New York. The Red Bulls gave them some hope when left fullback Roy Miller was sent off for a high foot that made contact with Franklin in the 78th minute. It was a foolish play, but New York was well in the clear.

Franklin notched DCU’s second goal in stoppage time with a well-taken left-footed volley from in close, but it was too little too late.

The New York Red Bulls finally got past D.C. United in MLS playoffs, something they had failed to do in four prior attempts.

What worked for the Red Bulls all season was what helped them beat D.C. United 2–0 in the first leg of their Eastern Conference semifinal last Sunday. It was a case of the Henry creating opportunities for Wright-Phillips to finish. And attacking midfielder Luyindula continued his inspired late-season form with two goals, with Henry getting the assists.