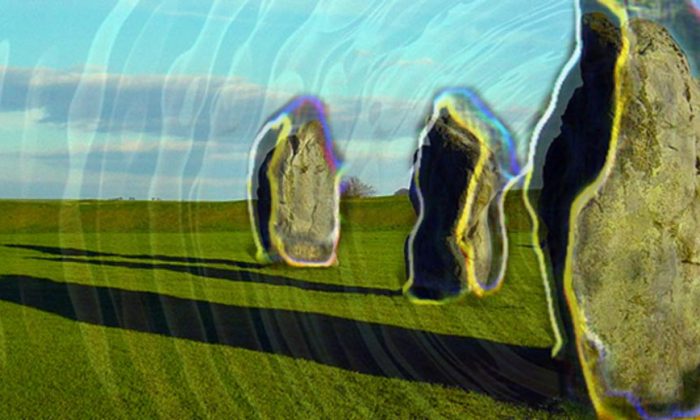 Standing stones in Avebury, Whiltshire, England. (CC BY)
Beyond Science

It doesn’t take much to stimulate the human body’s electro-magnetic circuitry; a small change in the local environment is enough.

People who visit ancient temples and megalithic sites often describe experiencing a strange sensation. The standard explanation is that such feelings are nothing more than a “wow” factor, the result of visual stimuli from the overwhelming impression generated by megalithic constructions, such as stone circles, ancient temples, and pyramids.

But the cumulative evidence suggests otherwise, that megaliths and other ancient sacred places are actually attracting, storing, and even generating their own energy fields, creating the kind of environments where one can enter an altered state of consciousness.

In 1983, a study was undertaken by engineer Charles Brooker to locate magnetism in sacred sites. The test subject was the Rollright stone circle in England. A magnetometer survey of the site revealed how a band of magnetic force is attracted into the stone circle through a narrow gap of stones that act as the entrance.

The band then spirals towards the center of the circle as though descending down a rabbit hole. Two of the circle’s western stones were also found to pulsate with concentric rings of alternating current, resembling ripples in a pond.

The analysis led Brooker to state how, “the average intensity of the [geomagnetic] field within the circle was significantly lower than that measured outside, as if the stones acted as a shield.”

‘The average intensity of the [geomagnetic] field within the circle was significantly lower than that measured outside, as if the stones acted as a shield.’
— Charles Brooker, engineer

Such discoveries help us decipher what the ancients were up to when they built megalithic structures.

At the Temple of Edfu in Egypt there is a wall featuring what amounts to a recipe for establishing a space that differs energetically from its surrounding landscape—a temple.

The instructions describe how certain creator gods first established a mound and “pierced a snake” to the spot, whereupon a special force of nature impregnated the mound, which led to the construction of the physical temple.

The symbol of the serpent has always been a culturally shared metaphor of the Earth’s meandering lines of force, what scientists refer to as telluric currents.

Controlling the Laws of Nature

It seems ancient architects had a fine degree of control over the laws of nature, because a 2005 study of energy fields in and around Avebury, the world’s largest stone circle, shows how its megaliths are designed to attract a ground current into the site.

The study was performed by the late John Burke, who published his results in his book, “Seed of Knowledge, Stone of Plenty.”

Electrodes planted at Avebury reveal how its circular ditch breaks the transmission of telluric ground current and conducts electricity into the ditch, in effect concentrating energy and releasing it at the entrance to the site, sometimes at double the rate of the surrounding land.

The Mysterious Plain of Megalithic Jars

Magnetic readings at Avebury die away at night to a far greater level than can be accounted for under natural circumstances. They charge back at sunrise, with the ground telluric current from the surrounding land attracted to the henge just as magnetic fluctuations of the site reach their maximum.

Burke also found that the stones of Avebury are deliberately placed and aligned so as to focus electro-magnetic currents to flow in a premeditated direction using an identical principle to modern atomic particle colliders, in which airborne ions are steered in one direction.

The effect of sacred sites behaving like concentrators of electromagnetic energy is enhanced by the choice of stone.

This has a profound influence on the human body, particularly the dissolved iron that flows in blood vessels, not to mention the millions of particles of magnetite floating inside the skull, and the pineal gland, which itself is highly sensitive to geomagnetic fields, and whose stimulation begins the production of chemicals such as pinolene and seratonin, which in turn leads to the creation of the hallucinogen DMT.

In an environment where geomagnetic field intensity is decreased, people are known to experience psychic and shamanic states.

An exhaustive investigation into the Carnac region of France, where some 80,000 megaliths are concentrated, reveals a similar spiritual technology at work. At first the leading researcher, electrical engineer Pierre Mereux, was skeptical that megalithic sites possessed any special powers.

Mereux’s study of Carnac shows how its dolmens amplify and release telluric energy throughout the day, with the strongest readings occurring at dawn. The voltage and magnetic variations are related, and follow a phenomenon known as electric induction.

According to Mereux, “The dolmen behaves as a coil or solenoid, in which currents are induced, provoked by the variations, weaker or stronger, of the surrounding magnetic field. But these phenomena are not produced with any intensity unless the dolmen is constructed with crystalline rocks rich in quartz, such as granite.”

The megaliths of Carnac, positioned as they are upon 31 fractures of the most active earthquake zone in France, are in a constant state of vibration, making the stones electromagnetically active.

His readings of menhirs reveal an energy that pulsates at regular intervals at the base, positively- and negatively-charged, up to 36 feet from these upright monoliths, some of which still show carvings of serpents.

Did Giants Exist? Part 4: Were Giants Responsible for the World’s Ancient Megalithic Structures?

Extreme pulsations recycle approximately every 70 minutes, showing that the menhirs charge and discharge regularly. Mereux also noticed how the voltage of standing stones in the Grand Ménec alignment diminished the farther away they lay from the stone circle, which itself behaved as a kind of condenser or concentrator of energy.

The composition of the stones and their ability to conduct energy was not lost on Mereux and others. Being very high in quartz, the specially chosen rocks are piezoelectric, which is to say they generate electricity when compressed or subjected to vibrations.

The megaliths of Carnac, positioned as they are upon 31 fractures of the most active earthquake zone in France, are in a constant state of vibration, making the stones electromagnetically active.

It demonstrates that the menhirs were not planted on this location by chance, particularly as they were transported from 60 miles (97 kilometers) away, because their presence and orientation is in direct relationship to terrestrial magnetism.

Many ancient traditions around the world share a peculiar aspect: they maintain how certain places on the face of the Earth possess a higher concentration of power than others. These sites, named “spots of the fawn” by the Hopi, eventually became the foundation for many sacred sites and temple structures we see today.

What is interesting is that each culture maintains that these special places are connected with the heavens by a hollow tube or reed, and by this umbilical connection the soul is capable of engaging with the Otherworld during ritual. However, it also allows a conduit for the spirit world to enter this physical domain.

In 2008, NASA may have unwittingly proved this observation to be true when it published details of an investigation into flux transfer events (FTEs), in which it describes how the Earth is linked to the sun by a network of magnetic portals that open every eight minutes.

Such discoveries help to validate, in the scientific eye, the long-held belief by sensitives and dowsers since the recording of history that megalithic sites and ancient temples are places set aside from the normal world, where a person can connect with locations far beyond this planetary sphere.

Certainly the ancient Egyptian priests regarded the temple as far more than a conglomerate of dead stones. Every dawn they awakened each room with orations, treating the temple as a living organism that sleeps at night and awakens at dawn.

© FREDDY SILVA 2016 Material based on the author’s book The Divine Blueprint: Temples, power places, and the global plan to shape the human soul, Invisible Temple, 2012. Available at invisibletemple.com

Republished with permission. Read the original at AncientOrigins.net