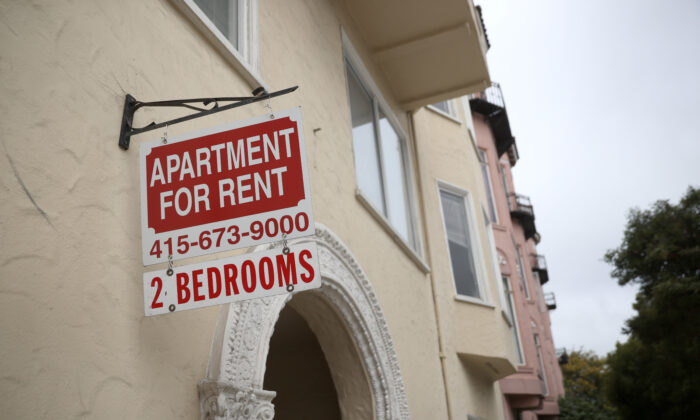 A "For Rent" sign posted in front of an apartment building in San Francisco, Calif., on June 2, 2021. (Justin Sullivan/Getty Images)
US Real Estate

These US Cities Are Seeing Largest Increase in Rent Prices

While New York, California, and Boston continue to be the most expensive rental markets in the country, some unexpected locales have actually experienced the largest increases in one-bedroom apartment prices year-over-year.

Greensboro, North Carolina, sits atop the list with rent increases of 74.2 percent, followed by Newport News, Virginia, at 60.7 percent, and Tulsa, Oklahoma, at 59.8 percent, according to  Rent.com’s August report. Jon Leckie, a researcher with Rent.com, told The Epoch Times that such increases aren’t unusual, given the amount of people who have been flocking to these areas.

“We’re seeing a pattern where the markets around the larger metro areas are attracting more people because they’re less expensive, but still within an hour’s commute to a city,” he said. “People want to get out of the crowded, expensive core metros, and the trend toward more remote working means they may not have to commute every day.”

“Currently, Charlotte [North Carolina] has the most outbound migration than any other city in the county,” Leckie said. “People are leaving the bigger cities, and we’ve found that much of inbound traffic to Greensboro and the other smaller markets is from New York City, Philadelphia, Chicago, Raleigh, Atlanta, Nashville, and [Washington] D.C.”

On the other hand, St. Louis; Fort Lauderdale, Florida; and Baltimore are the top three locations that have seen the biggest decrease in one-bedroom apartment rents. St. Louis leads with a 39.4 percent decline, followed by Fort Lauderdale at 34.9 percent and Baltimore at 26.9 percent. Miami, Cleveland, and Reno, Nevada, also made the list of rent reductions.

“St. Louis saw a huge decline, especially when downtown prices are so high for small spaces,” Leckie said. “The general trends we see, as the big coastal cities continue blowing up with high prices, are that renters will seek out cheaper areas in the Midwest and South. The Northeast and the West are still losing people.”

Not surprisingly, the report lists New York as the most expensive rental area, with the average one-bedroom rental at $5,760 per month. In the cities of Glendale and Oakland, California, monthly rents average $4,014 and $3,916, respectively. Boston apartment renters pay an average of $3,080, while San Francisco’s average is $3,701 per month.

Some of the nation’s most affordable one-bedroom rentals can be found in Oklahoma City, at an average of $945; Wichita, Kansas, at $840; and Sioux Falls, South Dakota, with the lowest average of just $796.

For two-bedroom rentals, the report lists Seattle, Little Rock, and Durham, North Carolina, as the top three cities experiencing the biggest rent increases. Seattle’s rent is up by almost 60 percent, followed by 54.7 percent for Little Rock and 54.2 percent for Durham.

Conversely, the largest two-bedroom rental decreases were found in Fort Lauderdale, down by almost 43 percent, and St. Louis and Des Moines, Iowa, down by 28.2 percent and 20.6 percent, respectively.

On the more affordable end, two-bedroom apartments in Lubbock, Texas, are averaging $922 per month, compared to Shreveport, Louisiana, where rentals are at $1,106, and Lincoln, Nebraska, at $1,295.

The once red-hot rental market of Boise, Idaho, has since cooled, with more than 61 percent of listings experiencing recent price cuts. The report also notes that homebuilders who couldn’t keep up with the demand last year are now cutting back on construction in the area.

Boise has since earned its reputation as “the most overvalued housing market in the United States,” according to researchers at Florida Atlantic University and Florida International. They blame continued high prices there for negatively affecting the region, making it harder now to attract new residents.

A recent report by the National Low Income Housing Coalition found that a worker would need to earn at least $25.82 per hour to afford a small two-bedroom rental home. For a one-bedroom, the wage dips slightly, to $21.25 per hour.