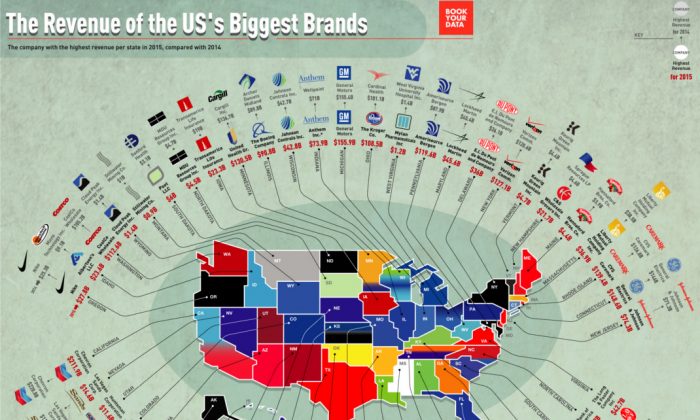 This graphic shows the largest company by revenue in every state, some of which you probably never heard of (Book Your Data)
Business

These 5 Companies Nobody Knows Are Still Top of Their State

The United States dominates the top 10 of global companies by revenue with names such as Walmart ($486 billion in 2015) and Exxon Mobile ($383 billion in 2015) who are also best in their U.S. states of Arkansas and Texas respectively.

But there are five companies that you probably haven’t heard of that are also best in state, but with revenues much less than $10 billion.

You probably haven’t heard of GCI Inc., unless you live in Alaska. With revenues of only $900 million, it’s the state’s largest company and provides telecom, internet, and cable TV services.

As you probably would have guessed, this company provides 95 percent of Hawaii with electricity and has revenues of 3.2 billion.

This company has nothing to do with Koch Industries of Kansas run by the Koch brothers Charles and David, in part because it has slightly lower revenues ($2.8 billion compared to $115 billion of Koch Industries). The only thing the two have in common is the fact that they are private. Oh, Koch Foods makes all kinds of poultry products.

Despite the name this company has nothing to do with literature. Quite on the contrary, the company is the nation’s largest producer of Ethanol, creating 1.7 billion gallons of fuel per year and generating revenues of $6 billion.