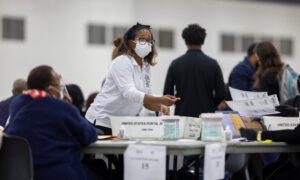 Workers with the Detroit Department of Elections help organize absentee ballots at the Central Counting Board in the TCF Center in Detroit, Mich., on Nov. 4, 2020. (Elaine Cromie/Getty Images)
Election Integrity

‘There Was a Conscious Effort to Disrupt’ Our Jobs: Detroit Poll Watcher

A Republican poll watcher who filed a lawsuit over suspected election fraud described a “pattern of intimidation and bullying” as he and others tried to monitor the ballot processing in Wayne County, the largest in the battleground state of Michigan.

A group of “extremely confrontational” poll observers “constantly” accosted the Republican watchers, hindering their ability to focus on observing the ballot count and checking for errors, Edward McCall told The Epoch Times.

“It was constant; it was unbelievable. The level of hostility and distraction, and just asking questions and staring at me from a couple of feet away … it was shocking,” he said in an interview.

McCall is one of two plaintiffs in a Nov. 9 lawsuit (pdf) alleging “numerous issues of fraud and misconduct” at the TCF Center in downtown Detroit, the facility that counts all the absentee ballots for Wayne County. McCall worked as a poll watcher there from Nov. 2 to Nov. 4.

On Nov. 3 and Nov. 4, poll workers “would hold papers in such a way as to block out view of the ballots,” McCall wrote in an affidavit seen by The Epoch Times.

He also experienced what he called “challenger challengers,” who “seemed to be there for the purpose of challenging us,” he wrote. The group, composed of 10 to 12 people, appeared to be coordinated by a man wearing an earpiece, and they constantly tried to prevent the Republican poll watchers from voicing issues, McCall said. They “always or almost always challenged the 6-foot [social distancing] rule,” frequently asking “Is there a problem here?” when he and others tried to view a ballot, even if they had maintained a reasonable distance, he said.

“I’m convinced that there was a conscious effort to disrupt what we were trying to do as challengers, and it was very, very disconcerting,” he said.

At one point, six people walked up to him in succession over a 45-minute-interval and accused him of standing too close, even though he had permission from a supervisor named Diane to stand there. When he refused to leave, one woman walked off to tell another person and pointed toward him, McCall recalled.

“I believe their entire purpose was to distract me from doing the challenging operation until they could get some ballots processed,” he said.

Qian Schmidt, who worked on the same shift as McCall on the night of Nov. 3, recalled in her affidavit a “chaotic ballot counting process,” such as unattended ballot boxes, three ballots that weren’t found in the system, and one instance of ballot duplication. A Chinese American, Schmidt experienced racial discrimination from non-credentialed individuals and was asked, “What gives you the right to be here since you are not American?” she alleged in the statement.

McCall counted 24 instances of ballot problems during his shift on Nov. 2. At least 15 ballots came with handwritten ballot numbers on the outer envelope that didn’t match the electronic poll book; one ballot was marked with the wrong date on the envelope; and some ballot forms weren’t filled out properly, but the checkers counted them without review, he said. Further, processed ballots were placed in a satchel atop a metal box containing ballots that require scanning. Workers could mistakenly miss the box or double-count ballots by accident, he said.

The workload also varied greatly across tables. While workers at McCall’s table had only 20 ballots on election night and basically sat around afterwards, others received as many as 2,000, causing them to speed through the process and potentially brush off any challenges as being disruptive, he said.

David Fink, an attorney for the City of Detroit Mayor’s Office, has dismissed both litigations as “baseless.” Spokesperson for the Michigan Department of State Jake Rollow called the Trump lawsuit “the same kind of irresponsible false rhetoric and misinformation that we saw throughout the election,” and maintained that “Michigan’s elections were conducted fairly, securely, transparently.”

But McCall argued that dismissing the allegations without considering the details is “a panacea”—“an overarching statement that does not reflect the facts on the ground.”

Dozens of Republican poll challengers have approached McCall over their treatment at the venue, he said.

“We owe it to the rest of the country to have a more transparent and more streamlined ballot processing here in Michigan, especially in Wayne County,” he said.