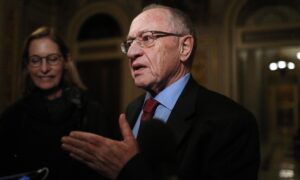 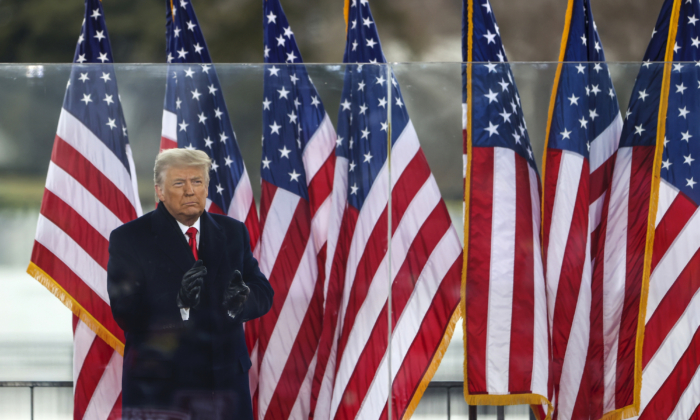 President Donald Trump greets the crowd at the "Stop The Steal" Rally in Washington on Jan. 6, 2021. (Tasos Katopodis/Getty Images)
Viewpoints

Opinion: There Is No Constitutional Ground for Impeachment of President Trump

Any effort to impeach President Donald Trump for comments made to Washington demonstrators would be flatly unconstitutional.

The Constitution permits impeachment and removal of the president for “Treason, Bribery, or other high Crimes and Misdemeanors.” There’s no reasonable claim that Trump’s speech, which largely focused on disputed, but credible, claims of election irregularities, was treasonous or involved a bribe. And in the absence of proof of deliberate incitement to riot, it wasn’t a “high Crime.”

So, as in the former Trump impeachment, the only potential basis for removal from office would be commission of a “high … Misdemeanor.” (We know from founding-era evidence that in the Constitution, the adjective “high” modifies “Misdemeanor” as well as “Crime.”)

The previous impeachment proceedings were marked by a debate over the meaning of the phrase “high misdemeanor.” Each of the four academic experts who testified at the House of Representatives Judiciary Committee offered their own definitions. The prosecutors and the president’s defense team offered their definitions, too.

This disagreement reflected an academic dispute that had been going on for many years. Based on incomplete surveys of the founding-era record and on British impeachment trials, researchers had reached very different conclusions about the meaning of “high misdemeanor.”

Unfortunately, however, almost no researcher (including me) had thought to examine the sources that might define the phrase authoritatively. Those sources were 18th-century English and American law books.

The Constitution is first and foremost a legal document—the “supreme Law of the Land.” Most of its framers were lawyers, as were most of those who explained it to the general public. Moreover, at the time, the American general public was unusually knowledgeable about law.

The Trump impeachment proceedings inspired me to undertake a comprehensive survey of founding-era legal sources to see if “high misdemeanors” had a defined legal meaning. If it did, that would resolve the long-standing debate.

In constitutional research, the sources frequently don’t yield overwhelming, one-sided evidence for an indisputable result. But it happened here. I was very surprised by this outcome, which contradicted what I had written previously. Nevertheless, I quickly admitted my mistake and duly published (pdf) the new findings.

It turns out that “high misdemeanor” was, in fact, a precisely defined legal term: It meant “serious crimes not meriting the death penalty.”

In 18th-century England and America, the legal word “misdemeanor” technically included all crimes of any level of gravity. The most serious misdemeanors were denominated felonies (or high crimes). Felonies traditionally were punishable by death. The most serious felony was treason, and a person convicted of treason usually suffered a particularly horrible death: a man was drawn and quartered; a woman was drawn and burned.

Lesser felonies—at common law there were nine of them—traditionally were punished by hanging. Examples are murder, rape, burglary, and robbery. (Happily, I can report that by the time of the founding, first offenders often received more lenient sentences.)

Serious offenses other than treason and felony were punished by prison time and by heavy fines rather than by death. These offenses included, among others, bribery, attempted murder, assisting a duel, certain kinds of blackmail, and so forth. Offenses in this category were called great misdemeanors, great misprisions, or high misdemeanors.

This criminal-law usage arose in England, but it was followed in America as well. For example, in my research, I uncovered several congressional statutes passed in the 1790s that designated serious crimes as “high misdemeanors” and imposed penalties accordingly. As in England, Congress labeled lesser crimes merely as “misdemeanors.”

So a “high misdemeanor” was a serious crime not meriting the death penalty. The icing on the cake from this conclusion was that it resolved some other questions that had puzzled scholars as well. And it explained the structure of the Constitution’s Impeachment Clause: the words “Treason, Bribery, or other high Crimes and Misdemeanors” provide one example of a high crime (treason), one example of a high misdemeanor (bribery), and include generic clauses covering other crimes in the same two categories.

Observe what is excluded from the grounds for impeachment. Congress may not impeach and remove for a minor crime. Nor may it do so because an officer is reckless, negligent, or has obnoxious political opinions. The constitutional penalty for those breaches is, for lesser officers, removal by the president and, for the president and vice-president, reelection defeat.

It’s significant that in the two years since these findings were published, no scholar has even attempted to rebut them. Nor can they be convincingly rebutted, given the volume and consistency of the evidence.

While debate over the meaning of the term continued, the House of Representatives could reasonably assume that noncriminal behavior could constitute a “high misdemeanor.” But that’s no longer true. Now we can say unequivocally that whatever you may think of the president’s speech, it’s not a basis for impeachment.

Robert G. Natelson is a leading originalist scholar who served as a law professor for 25 years. He is a senior fellow in constitutional jurisprudence at the Independence Institute in Denver. His research articles on the Constitution’s meaning have been cited repeatedly by justices and parties in the Supreme Court.