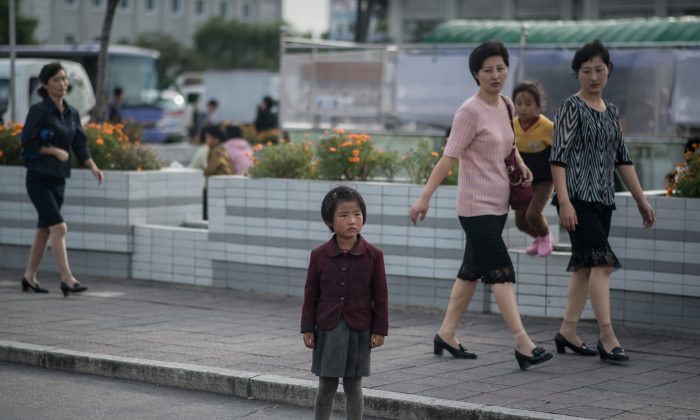 A child stands on a roadside in Pyongyang, North Korea in a photo taken on Sept. 27, 2017. (ED JONES/AFP/Getty Images)
Asia & Pacific

Sanctions take time, but North Korea is already showing the symptoms of an economy under duress, Secretary of State Rex Tillerson told reporters in Beijing on Thursday, Nov. 9.

Tillerson said the Chinese regime had shared signs they had observed that the effect of the sanctions was becoming a problem for the Kim regime.

“We see certain signs of our own through intel and other sources,” said Tillerson.

“It is creating some stress within North Korea’s economy and with some of their citizens, potentially even within some of their military.”

In recent weeks, reports from inside North Korea reveal a nation coping with a loss of revenue and wildly fluctuating prices in its fledgling market economy.

The North Korean regime under leader Kim Jong Un has made this winter’s fishing campaign a call to battle in an editorial published Tuesday in Rodong Sinmun, the official newspaper of North Korea’s ruling Workers’ Party.

“The fishing campaign today is a drive to uphold the Party policies and defend the socialist system,” says the editorial.

The Kim regime relies on an ideology of self-reliance and military-first policies to justify the routine hardship and mandatory unpaid work mobilizations in North Korea. Tuesday’s editorial celebrated those efforts.

“This year our army and people brought about a good result in the agricultural production, despite serious drought, with the great might of the army-people unity and the spirit of self-reliance and self-development,” it reads.

While the Rodong editorial lauded agricultural outputs, reports from inside North Korea indicated a brewing crisis.

Daily NK, a Seoul-based news site that specializes in obtaining information from within North Korea, has published stories detailing soldiers organizing farm raids to obtain rations, and possibly one incident of starvation.

The editorial says the previous leaders of the North Korean regime, Kim Il Sung and Kim Jong Il, had “worked heart and soul to provide the people with abundant fish.”

“The fishing sector should make ‘spectacular scenery of big fish catch’ in every port by putting energetic efforts to implementing the ideas of the Party and upholding its policies,” reads the editorial.

“All the officials and workers in the fishing sector should bring about a proud victory in the winter-fishing campaign with big fish hauls to give a great pleasure to the people in the socialist system, true to the Party’s intention,” it finished.

Those have included toll booths and updated electric meters.

According to Daily NK, the regime claims the new meters and tolls are an effort to develop the country’s transportation and electricity infrastructure.

A source in South Pyongan Province told Daily NK that authorities are asking citizens to pay for the new electric meters or face a penalty of 10 times the base usage fee.

“Is this not just another nonsensical attempt to extract money?” said the source.

“In the wake of recent sanctions, people are becoming increasingly worried and sensitive [to these directives].”

Another source in Pyongyang said the regime was installing toll booths on major highways on the outskirts of the city to collect tolls from those entering.

The tolls, according to the source, are said to be for infrastructure improvements and to boost surveillance over those entering the city.