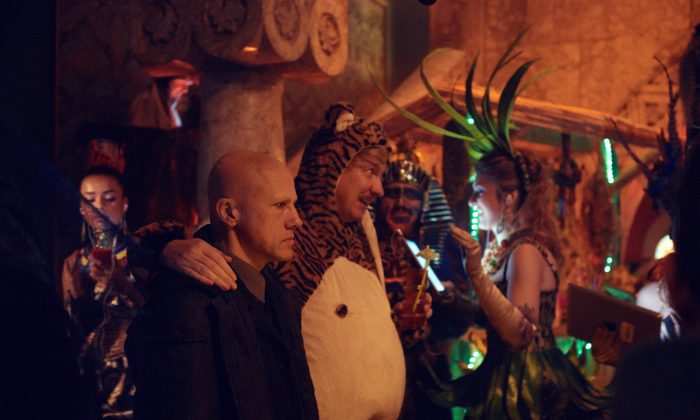 ‘The Zero Theorem’: Terry Gilliam Goes Back to the Dystopian Well

Evidently, there is good money to be made from metaphysical nihilism. How so, you might ask? Well, obviously you are not an evil businessman or you would see it plain as day. For the rest of us mere mortals, it remains a gaping narrative hole in Terry Gilliam’s “The Zero Theorem.”Qohen Leth is a programming drone who is slaving away, crunching the Zero Theorem, the grand unified theory of life’s meaninglessness, at the behest of his boss, “Management,” the charismatic chairman of Mancom. Evidently, the corporate predator stands to make a lot of money if he can prove the primacy of nothingness. However, Leth lives in the hope that he will soon receive a phone call that will finally give him the inner peace he yearns. (Careful of your shoes, because the irony is laid so thick here that even other characters pick up on it.)Although practically a shut-in, Leth manages to befriend Bainsley, a professional party-girl, and Management’s troubled cyber-repairman son Bob. Bob’s rebellious streak is genuine, but tragically so are his congenital health issues.The good thing about “Zero” is that it looks like a Terry Gilliam film. Leth’s lair is a masterwork of cyber doodads, human detritus, and near-future urban decay. Likewise, the Mancom set pieces are suitably large and eccentric. Unfortunately, Pat Rushin’s screenplay was apparently a belated afterthought, recycling wholesale tropes from Gilliam’s vastly superior “Brazil.” In fact, “Zero” even lifts the ending (or rather one of the endings), minimally adapting it to fit the modestly altered circumstances.Granted, Christoph Waltz truly goes for broke as Leth, over and beyond shaving his eyebrows. He also develops some intriguingly ambiguous chemistry with Mélanie Thierry’s Bainsley. Yet all his heavy lifting is undermined by an overabundance of clichés and cringingly broad characters, while internal logic remains scarce.By far, the greatest embarrassment is the ridiculous-looking Matt Damon, trying to come across like a scary adult. He might be going for a J.R. “Bob” Dobbs from the Church of the SubGenius kind of thing, but he just cannot carry himself convincingly. Still, in all fairness, it must be admitted that Tilda Swinton gives a considerably subtler performance as Dr. Shrink-Rom, the corporate psychobabbler, than her mean-spirited Thatcher caricature in “Snowpiercer.”This is one of those films you want to be so much better than it really is, especially considering Gilliam doesn’t exactly churn films out like Woody Allen does. Frankly, the far less heralded “The Scribbler” is a much better mind-trip. A real disappointment, “The Zero Theorem” opens Friday, Sept. 19, in New York at the IFC Center.Joe Bendel writes about independent film and lives in New York. To read his most recent articles, please visit www.jbspins.blogspot.com